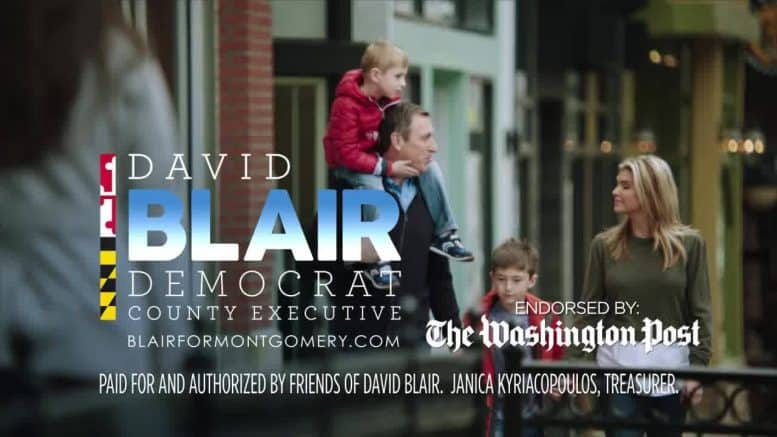 In case The Washington Post’s editorial board wasn’t clear in its first resounding endorsement for David Blair’s Montgomery County executive bid, they are back for round two.

The Post’s editorial board penned another ringing affirmation of businessman David Blair in his quest to become Montgomery County’s next CEO.

Entitled “Why David Blair makes sense for Montgomery County,” the editorial board praises Blair for running a “positive, disciplined and coherent campaign.”

“Meanwhile, the target of that ad, David Blair, whom we endorsed, has run an insistently positive, upbeat and serious campaign. His platform is coherent, his messaging disciplined and his thinking strategic.”

Unlike Blair’s harshest critics, The Post’s editorial board highlights Blair’s private-sector experience and his ability to self-fund his campaign as a net-positive.

“The fact that he happens to be self-funding a major portion of his campaign — he founded, ran and sold a pharmacy benefits management company — has prompted most of his opponents to use his wealth as a cudgel against him.”

The Post later praises Blair for his jobs and economic plan, writing,

“In this race, however, the more relevant point is that Mr. Blair makes the most convincing case for his ability to attract jobs and spur economic vitality in a county of 1.1 million people whose prospects look shaky, despite a national and regional economic boom.”

Like before, the Post pushes the narrative that the county executive race is now a two-man contest: Blair versus Elrich. And the editorial board leaves little doubt that Elrich is the wrong man for the job.

“One leading candidate [Marc Elrich] declared he’d rather divert jobs to neighboring Frederick County than attract them to Montgomery, which desperately needs to expand its tax base to maintain its highly rated public schools and services.”

“One leading candidate for the job, Marc Elrich, a veteran at-large member of the County Council known mainly for opposing development projects of every description, recently suggested just such a strategy. In a telling interview with the website Greater Greater Washington, he said his solution to roads clogged with commuters is to focus employment elsewhere. “I prefer to put jobs in Frederick” County, he said.

And for the gut shot: “That’s a fine point of advocacy for a candidate running in Frederick. It fails as a selling point in Montgomery.”

“Another unleashed a ludicrous attack ad on cable TV, likening a rival — and fellow liberal Democrat — to President Trump…  So does the recent ad paid for by Roger Berliner, another incumbent council member running for county executive, comparing the civil, substantive, detail-oriented Mr. Blair to Mr. Trump.”

The editorial board concludes this time by comparing Blair to another wealthy former business executive who lives in Potomac:

“A better comparison is Rep. John Delaney, a Democrat who, like Mr. Blair, was a successful businessman without government experience when he first ran for Congress six years ago in Maryland’s 6th District, which includes part of Montgomery. Mr. Delaney has been an excellent member of Congress. We think Mr. Blair would be similarly successful as county executive.”