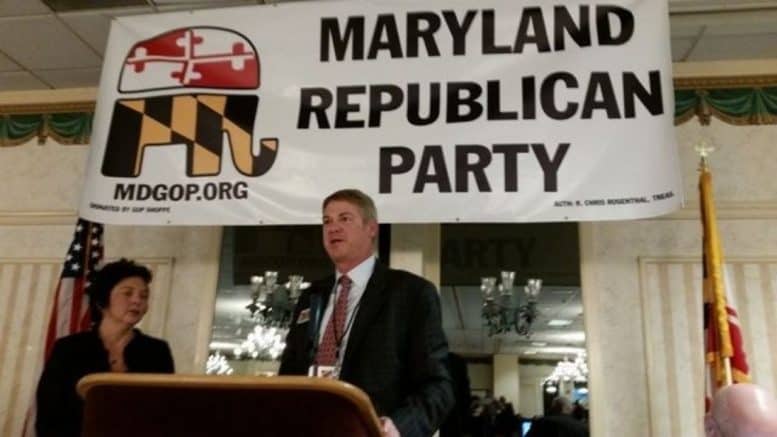 Herald-Mail Media reporter Tamela Baker interviewed Haire on Friday, in which he praised Republican President Donald J. Trump as “making a fundamental difference” but issued an uncensored condemnation of Frosh, who is running for a second term as Maryland’s attorney general.

Haire spoke to Baker on the record in the hallway lobby of Fountain Head Country Club; she reported Haire’s remarks:

Haire was elected chairman of the Maryland Republican Party in early December 2016 at the Republican’s bi-annual state party convention – succeeding Diana Waterman – and is serving a two-year term.

Prior to Haire’s election as the GOP state party chair, he served as counsel to Maryland’s Republican Party. According to an online bio of Haire, as of February 2017, he has worked as a managing partner specializing in construction law at Fox Rothschild LLP in Washington, D.C.

Haire did not respond to A Miner Detail’s Facebook Messenger request for comment. Maryland Republican Party Executive Director Patrick O’Keefe, when reached, refused to comment on Haire’s attack on Frosh.

Frosh’s eventual Republican challenger, Howard County lawyer and Army Reserves’ officer Craig Wolf, was in Hagerstown on Friday evening at the Republican dinner. When reached for comment via Facebook Messanger, Wolf did not directly comment on Haire’s comment and instead chastised Frosh for politicizing Maryland’s attorney general’s office.

“I believe that Brian Frosh has politicized the Office of Attorney General. He is focused on Washington, not on Maryland. I don’t know him that well personally, having met him only twice. So I can only speak to what he has done – or failed to do – as Attorney General. He says he is proud of the work he has done over the past four years. But I am not sure what he is proud of. Baltimore is the most dangerous city in the country with a per capita murder rate that is equivalent to Venezuela.”

“The opioid crisis is out of control with more than 2,000 Marylanders dying every year. Maryland is fourth in the nation per capita in trafficking of women and children. MS13 is expanding throughout the state and gang/gun violence is out of control. Brian will not work with the Governor and has set himself up as essentially a fifth column in the state. I will work closely with the Governor, the legislature – on both sides of the aisle – and the law enforcement community to find common sense solutions to the problems we are facing.”

Pressed again to comment on Haire’s verbal assault on Frosh, Wolf told A Miner Detail that his campaign will be respectful of his opponents.

The former longtime Montgomery County state legislator has not been shy in taking on Donald Trump’s administration.

In April, Frosh joined 17 other state attorneys general in suing the Trump administration over a proposal to add a citizenship question to the 2020 Census. Frosh attacked the Trump administration’s proposal as being anti-immigrant. Last year, Frosh joined the District of Columbia’s attorney general in filing a lawsuit against President Trump in Maryland federal court, arguing that the 45th president is violating the U.S. Constitution’s Emoluments Clause.

Maryland’s Democratic supermajority in the legislature recently granted Frosh the power to sue the federal government without first seeking the governor’s permission – a direct blow to Larry Hogan.

Frosh was first elected attorney general of Maryland in 2014, defeating Republican Jeffrey Pritzker with 56 percent of the vote.