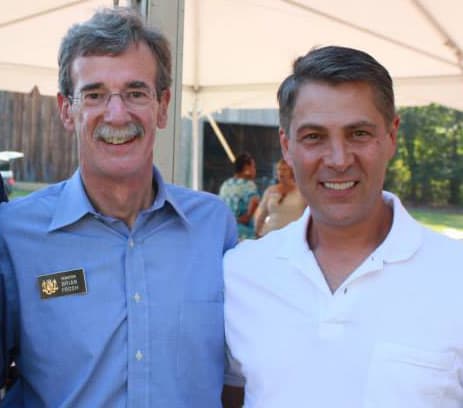 Manno, who has represented District 19 in the state Senate since 2011, served alongside Frosh, a former state senator from the neighboring District 16, for four years. Both Manno and Frosh are revered as progressive champions among a wide swath of Maryland Democratic activists.

“Attorney General Frosh has been a friend and a mentor to me for many years. We’ve fought injustice together and worked to make this world a better place. I could not be prouder or more honored to have his support in this important election,” Manno told A Miner Detail on Thursday afternoon when reached for comment.

A Miner Detail is the first media outlet to report Frosh’s endorsement of Manno.

Manno, an attorney and former Capitol Hill staffer, is positioning himself as the progressive alternative to the moderate millionaire liquor retailer David Trone and state Del. Aruna Miller (D-Darnestown).

The Republican race is less congested and more predictable: Amie Hoeber, a former Pentagon official under President Ronald Reagan and defense contractor – the 2016 Republican nominee in the 6th Congressional District – is largely expected to wrap up the nomination against the three lesser-known Republicans Lisa Lloyd, Kurt Elsasser and Bradley St. Rohrs.

Speaking on his endorsement, Attorney General Frosh stated “I’ve known Roger for more than 15 years. During our time together in the State Senate, we worked closely on issues to improve the lives of working families, protect the Chesapeake Bay, and preserve Maryland’s natural resources. That’s why I’m endorsing Roger for Congress in the 6th congressional district.”

A self-described “People’s Lawyer,” Frosh is the first current statewide elected official to endorse in the race. The endorsement carries extra resonance in the 6th Congressional District by virtue of Frosh having represented Montgomery County for 28 years in the Maryland General Assembly.

“Brian Frosh is a model public servant, and I am proud to have his support in our race for Congress,” Manno stated. “As a State Senator, Brian Frosh was instrumental in some of my key accomplishments on behalf of Marylanders, including passage of legislation guaranteeing paid rest breaks for Maryland’s retail workers, and providing economic justice for victims of civil rights abuses.”