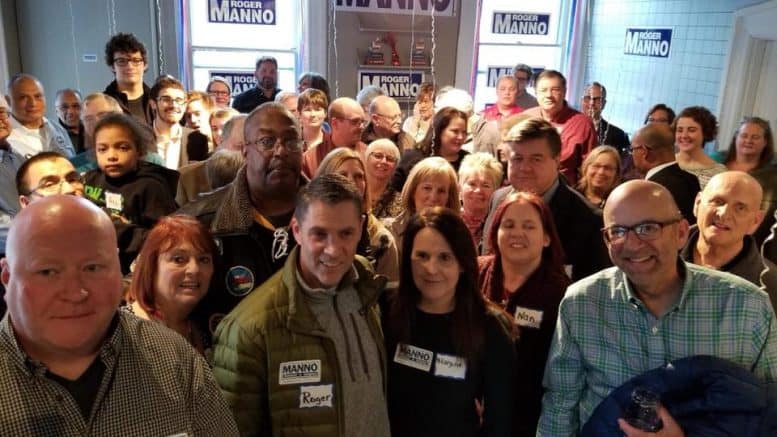 With more than 100,000 individual members and supporters and 30 affiliated religious, community, and labor organizations, Progressive Maryland focuses on outreach, public education, lobbying, direct political action, research, and helping elect progressive candidates to office. It is also the state affiliate of People’s Action, which has over 50 affiliates in 29 states.
“This is really big. I’m so proud to continue to stand with Progressive Maryland, and with justice advocates from across our great state,” stated Manno. “The fight for equality of opportunity is among America’s greatest challenges today. It begins with a good job, benefits, and a level playing field. Hardworking Marylanders deserve somebody who will stand up and bring this fight to Congress – that’s why I’m running.”
Progressive Maryland’s Executive Director Larry Stafford expressed excitement for this candidate, stating “State Senator Roger Manno is the only candidate with proven progressive values and legislative victories in the Congressional District 6th Race.”
Today’s endorsement recognizes Manno as the clear progressive in a crowded Democratic Primary field. Manno is:

Total Wine & More co-owner David Trone, a multimillionaire businessman from Potomac who spent more than $13 million on his unsuccessful 2016 Democratic primary bid for Congressional District 8, has also opened a Hagerstown office and has been steadily reaching out to local Democratic officials for support.

Trone’s political director, Grace Rivera-Oven, resigned nearly two weeks ago from Trone’s campaign over personal and family reasons, according to a resignation letter the Trone campaign shared with A Miner Detail.

Sources familiar with Rivera-Oven’s resignation told A Miner Detail that she was concerned with “misogyny” and “sexism” within the Trone ranks and with David Trone himself. However, Rivera-Oven is said to have left Trone’s campaign because she is gearing up to run for a Montgomery County Council at-large seat.

Another source told A Miner Detail that Rivera-Oven was allegedly concerned about racism within the Trone campaign structure.

More information about Rivera-Oven’s resignation is expected to drop in the coming weeks.

Manno and Trone are both competing heavily in Western Maryland, with Manno working to bolster his credentials among Western Maryland progressives while Trone builds his base of support with municipal officials and business leaders.

Washington County Democratic Party Chairman Peter E. Perini, Sr. is publicly backing Trone’s congressional bid, appearing as a key ally for Trone in Washington County. Perini is running for state delegate in District 2B, which encompasses most of the City of Hagerstown and is considered a Democratic stronghold and potential Democratic pickup in 2018.

Since launching his congressional bid, Manno has amassed numerous endorsements from leading labor organizations. Manno, however, lags in fundraising, coming in behind Trone and Del. Aruna Miller, who has built a large Montgomery County volunteer base and is considered Trone’s primary competition among Montgomery County Democratic Party insiders.

Andrew Duck, a Democrat also running for Maryland’s 6th Congressional District, on Saturday opened a campaign office in downtown Frederick. Duck is competing for the same Western Maryland progressive base that Manno is targeting.

Rep. John Delaney (D-Potomac) announced his candidacy for president last July, resulting in a large crowd of candidates running to fill his seat.

Sources have told A Miner Detail that another Republican, Ken Timmerman of Frederick, will soon launch his campaign for the 6th Congressional District. Timmerman, a rightwing Trump supporter, lost a congressional bid in 2012 against then-Congressman Chris Van Hollen (D-Md.).

Be the first to comment on "Manno endorsed by Progressive Maryland"