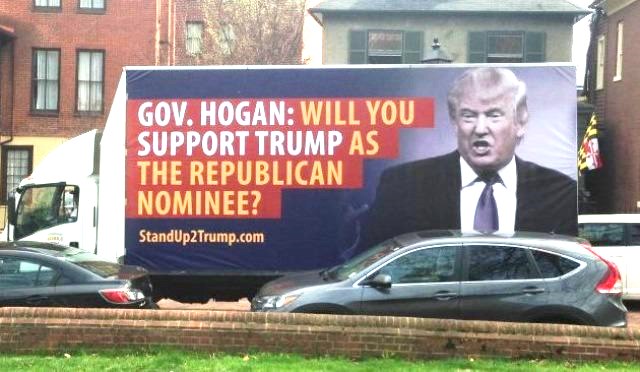 Maryland Congressman John K. Delaney released a statement yesterday calling President Trump’s budget a “harmful-looking Tea Party budget that doesn’t position the country to succeed in a high-tech global economy or to lead in the industries in the future.”

In the latter half of Delaney’s statement, the congressman chastises Maryland Gov. Larry Hogan:

I called on every elected official in Maryland to speak out against Trump’s budget and we need a united voice now more than ever. Once again, it would be helpful if our Governor dared to criticize the President, who is pushing an agenda that would be terrible for our economy and state budget.”

During the 2016 Annapolis Session, Delaney paid for a giant mobile billboard to roam the State House in an effort to grab the governor’s attention. The billboard challenged the governor to take a position on Trump, then the leading Republican nominee for president, while the opposing side read, “silence is an endorsement.”

Of course, Donald Trump did become the Republican nominee in 2016 and was ultimately elected president; however, Hogan spokesman Doug Mayer released a statement last November affirming that Gov. Hogan voted for his late father, Larry Hogan Sr., for president over both major-party candidates.

The moderate Maryland congressman is widely rumored to be considering an exit from Capitol Hill in 2018 for a 33-mile trip to Maryland’s Governor’s mansion. For over a year now, Delaney has been tossing out subtle hints that he’s seriously interested in taking on Larry Hogan, America’s second-most popular governor, in an upcoming matchup.

The White House’s proposed budget allocates nearly a $22 billion boost for defense spending, massive border security increases, and over a billion is reserved for school choice programs. Meanwhile, President Trump has one again contradicted candidate Trump in that he promised to preserve and protect Social Security and Medicaid. The reality, however, lies within the details: Trump’s budget plans to cut the Children’s Health Insurance Program by at least 20% over the next two fiscal years and slash Medicaid.

The Trump budget also cuts other programs that help the working poor: food stamps, student programs, the earned-income credit, the child tax credit and disability payments, among others. Another cut: biomedical research.

John Delaney has said he will make an announcement in late June about his political intentions for 2018.

How to help Ellicott City recover from flood damages