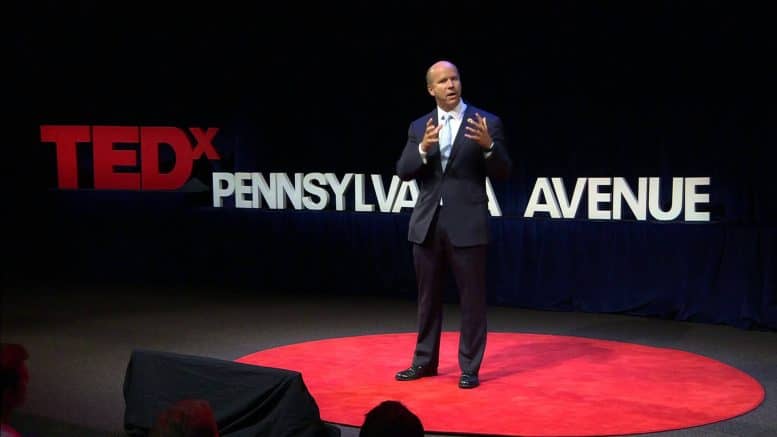 Last week, A Miner Detail broke a story that Maryland Democratic Congressman John Delaney (MD-6) may have his sights set not on Maryland’s Governor’s Mansion but another mansion – one located at 1600 Pennsylvania Ave in Washington, D.C.

My conversation with former Maryland Attorney General Doug Gansler at the latest Western Maryland Democratic Summit kicked off the speculation that Delaney may be running for president when Gansler assured me that the moderate-to-progressive 6th district congressman wasn’t running for governor of Maryland or Congress.

Instead, Gansler said, emphatically, that he hopes John Delaney would run for president.

The television clip of MSNBC host Chris Matthews, who is married to the just-elected Maryland Democratic Party chair, Kathleen Matthews, in which Matthews uttered last week on his show, Hardball, perhaps mistakenly, that Rep. Delaney is opening a campaign office in Iowa spurred further speculation among the Maryland political establishment that Delaney may be running for president of the United States.

However, Delaney’s congressional spokesman, Will McDonald, put the kibosh on the Delaney presidential chatter, as first reported by The Daily Record government reporter Bryan Spears,

“Congressman Delaney does not have an office in Iowa or any other place other than Maryland and Washington, D.C.,” McDonald said in an email. “As he has said before, the Congressman and his wife plan to make an announcement regarding a possible run for Maryland’s governor by the end of June.”

Fair enough; but, as Adam Pagnucco of Seventh State Blog  pointed out,

Delaney’s fundraising schedule includes at least three near-term events.  A May 2nd event in D.C. was hosted by lawyers Bert Pena and Joseph A. Muldoon III.  A May 18th event will be held at the Delaneys’ Capitol Hill townhouse.  And a June 9-11 event is scheduled at the Delaneys’ home in Rehoboth Beach, Delaware.  Look carefully at the language of the solicitation for this last event.  It is an “inaugural beach weekend,” implying that there will be similar events in the future.

Another question I have is if Congressman Delaney is seriously looking into whether to run for governor of Maryland, wouldn’t he have, by now, opened a Maryland campaign finance account to begin raising money or collecting donations from willing supporters? I think this is a fair question to ask Team Delaney.

After Delaney’s spokesman released the statement and Sears reported it, I had more questions – only of a different nature.

I sent McDonald the following email on May 4,

While the statement is seemingly explicit, from a journalist and blogger’s perspective, could this statement be open to interpretations?

The Congressman’s wife, April – a former Republican-turned-Democrat, moderate politically and, if I remember correctly, served on a committee entitled “Women for Bush” – would be a formidable candidate Democratic challenger against Republican Gov. Larry Hogan.

The possibility of April running for elected office is swirling among the Maryland political establishment.

I appreciate any statement you may have to offer.

For years now, Maryland politicos have speculated whether Congressman Delaney’s exceptionally talented spouse, April Delaney, would someday make a run for public office. If husband John goes for the White House or Maryland’s Governor’s House, wouldn’t Mrs. Delaney be a natural successor to her husband in Congress? The obvious answer here is yes, of course, she would

Delaney’s spokesman, once again, pulled out his fire extinguisher and used it liberally in his response to my emailed questions, writing,

My statement was only meant to convey that John is consulting with April on whether or not running for Governor is the best decision for him. I wouldn’t read into it anything other than that. The answer to both of your scenarios is NO.

If Delaney does run for president in the Democratic primary, he would certainly have his work cut out for him, competing with some of the Democratic Party’s 2020 all-stars like Elizabeth Warren, Bernie Sanders and Cory Booker. Then again, Delaney’s political talents are far-reaching.

Maybe Delaney is just the Democratic candidate the country needs to take on and beat Donald J. Trump. What’s so wrong with a successful former businessman-turned-public servant with a record of bipartisanship in Congress? Would Delaney be progressive enough for the Democratic base? Or would he be more of a Bob Casey type of candidate? Either way, Delaney’s entrance onto the national stage is not a matter of if, but when.

If it were a Delaney v. Trump matchup in 2020, I’d go with my gut and vote for my congressman. I did it once before when Delaney ran against that Republican in 2014, and I would do it again without any reservations.