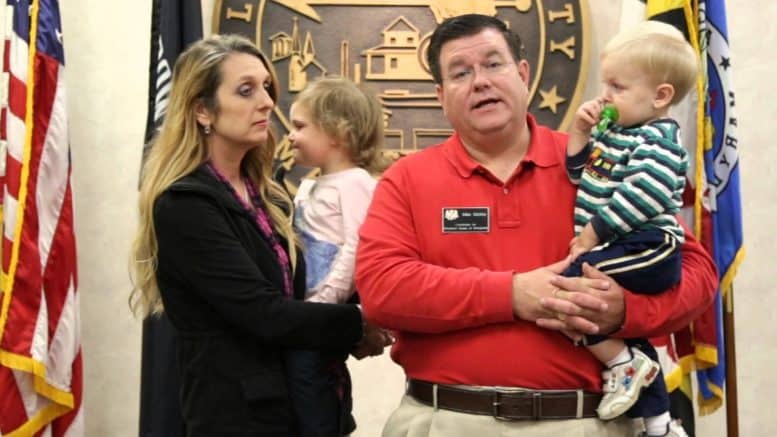 A Miner Detail was the first media outlet to report that Rebecca Drew, Allegany County’s former Register of Wills, was set to be indicted on criminal charges and eventually resign. Drew’s resignation came on Tuesday, opening a cascade of political possibilities spread across two counties.

Mike McKay announced last month that he is not seeking re-election to the Maryland House of Delegates in District 1C and will instead run for the Register of Wills job in the next election.

McKay’s decision not to seek re-election in District 1C largely mostly hinges on two factors: 1) His time spent away from his family; and 2) The $47K a year Maryland delegates make for being part-time legislators.

McKay is a conservative Republican who was first elected to District 1C in 2014, a seat formerly held by Washington County Commissioner LeRoy Myers for twelve years. McKay and his wife, Kimberly, have eight children – one in college, one in high school, one toddler, and five in elementary school.

On Tuesday, Herald-Mail Media reported McKay is applying for the Register of Wills job, having committed to “putting in his letter of intent.” However, according to one source, the application process closes today and the judges are set to meet this Friday to begin the process of selecting Drew’s successor. Another source told A Miner Detail that McKay will almost certainly be chosen to replace Drew.

McKay, though, is well-positioned to be selected by the judges of the Orphans’ Court; he has an established working relationship with each judge and is respected by his constituents as a credible successor to Drew.

If McKay is selected, he would return to Cumberland full-time, resigning his position in the House of Delegates and begin to collect the $96K annual Register of Wills salary. McKay would be required to run for the seat in 2018, when the Register of Wills position is on the ballot.

District 1C would then be left vacant if McKay is chosen, leaving the two county Republican Central Committees – Allegany and Washington – to select McKay’s successor.

Since McKay is a registered Republican, Maryland law grants the respective county Republican Central Committee the authority to choose up to three names to send to Maryland’s governor.

(District 1C stretches across two counties – from Williamsport to the south and west sides of Cumberland.)

Moreover, in 2015, the same committee fell in line with Baker’s hand-selected choice, the late Vincent G. “Woody” Spong, to succeed Bill Wivell on the commissioners board after the same committee chose Wivell to fill Andrew Serafini’s District 2A seat (Serafini was appointed to the District 2 state senate seat held by Chris Shank after Shank was selected for a job in the Hogan administration).

Commissioners Jeff Cline and John Barr are also popular choices to fill McKay’s seat. Cline has a well-established relationship with McKay, and an endorsement from McKay himself could go the distance for Cline. However, Cline is seemingly uninterested in the position at this time (he is responsible for caring for his aging father).

Nicole Alt-Myers, a former Cumberland City councilwoman and the spouse to Commissioner LeRoy Myers, has expressed interest in running for McKay’s seat. Myers was rumored to be mounting a primary challenge against McKay in 2018. If she applies for the vacancy, she, too, could be a formidable contender.

Largely unknown in traditional political circles but known for her community activism and work on Maryland’s Local Government Justice Reinvestment Commission, Hancock’s only hometown attorney, Jordan Lysczek, would be an outside-the-box pick that would be welcomed by many.

Lysczek, a 30-year-old Republican female, is a rising star in her community and roundly respected by her legal peers and colleagues. Her expansive command of the law and breadth of knowledge on public policy issues should propel her as an instant frontrunner to replace McKay in District 1C.

First elected as an Allegany County commissioner in 2014, Shade is often described as a thoughtful, passionate and engaged community leader. He is rumored to be a favorite of state officials and is said to have the support of the governor’s office and staff.