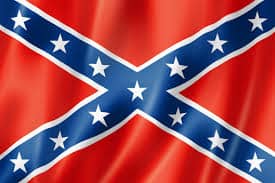 Later in the blast, Parrott writes,

With regard to the statue of Robert E. Lee, I can tell you that I will speak out to keep that statue and every other statue in the Antietam National Battlefield.  At Antietam, 4,000 Americans died—not Union or Confederate, but Americans; each fighting for what they thought was best for their state and country; each praying to the same God for help in turbulent times.

Yes, Mr. Parrott, Americans who fought for the Confederacy fought for what they thought was best at the time – slavery. While Confederate soldiers and officers may have been praying to a God, no God of mine and yours would ever condone the enslavement of humans based entirely on the color of their skin.

Parrott’s blast got worse – if that was even possible.

Reaffirming his patriotism and love of country, Parrott wrote, “I don’t want to stay silent while our National History (why he capitalized this phrase, I don’t know) is smashed to pieces during my lifetime.

I presume Parrott and his Tea Party supporters will wax poetic about the good old days when things used to be simpler, easier and slower  – when bread only cost a nickel and when you could still call the nice African-American family two doors down “that lovely colored family.”

Incidentally, just a few years ago (2013), the Klan planned a membership drive just down the road from Parrott’s beloved Gen. Lee statue; and the white-hooded hoodlums even managed to grab themselves a government permit to hold their hate gathering.

Somebody must ask Parrott if he is completely and totally politically f****** tin eared. Does he have any clue or comment about what just happened in Charlottesville last month? Does Parrott have any clue about the rise of the alt-right and white nationalism?

Over the years, Parrott has advocated for some whacky policies (e.g., mandatory tattoos for people with HIV and AIDS), but if this email blast isn’t catering to the lowest common political denominator, then I don’t know what is. Neil Parrott certainly knows how to rev up his base.

Even for Neil Parrott, this is a new low.
—–

Here’s Parrott’s email blast that you won’t be able to unsee.

I just received a letter from a friend whose words have really stuck with me. She wrote, “…I find it so interesting that after all these years, we MUST remove [Civil War Statues]…[Tearing down statues] is something that is usually done when a country has been conquered and everything dealing with its culture is totally destroyed.”

Did you know that our Maryland Congressman, John Delaney, wants to remove a Civil War statue of Robert E. Lee from the Antietam National Battlefield?  He is thoughtlessly jumping on the anti-history bandwagon that is gripping our nation. In the wake of 9-11, our history has never been more important.

SAVE THE DATE: Thursday, September 21, from 5:30-8:00pm. This is not about a simple statue–this is about our history, our children, and our grandchildren.

“There are no better teachers for those who come after us than the silent monuments on the battlefields, marking the places where men died for a principle they believed right, whether they wore the blue or the gray uniform.” Major Wells Sponable, New York Monument Dedication at Antietam Battlefield on September 17, 1902.

Antietam Battlefield is in my legislative district. My wife, April, and I have hosted a Pie and Ice Cream Social in a restored, historic barn nestled right in the heart of the Battlefield, for the last five years, and 2017 will be the 6th year.

Would you be able to join me and my family on Thursday evening, September 21st. Please RSVP to this email, if you are planning to come.

I am facing a new election in 2018, and I need your help to be able to continue to work for our shared, common-sense values. Ryan, your donation would go a long way right now toward helping my reelection effort so that I can continue to represent you in important political battles. If you plan to come to the events, which I hope you are, the suggested donation is $35/person and $65/family. You can RSVP to this email.

With regard to the statue of Robert E. Lee, I can tell you that I will speak out to keep that statue and every other statue in the Antietam National Battlefield.  At Antietam, 4,000 Americans died—not Union or Confederate, but Americans; each fighting for what they thought was best for their state and country; each praying to the same God for help in turbulent times.The fact that politicians are trying to remove monuments from Antietam Battlefield in order to create political division for political advantage is unfathomable to me.  This type of cold political calculation, without concern for future generations, is wrong.

Please join me in less than two weeks, on Thursday, September 21, at the Antietam Battlefield National Park, mere feet away from this historical, American statue that my Congressman audaciously and carelessly wants to tear down.

Like many of you, I love my country, and I don’t want to stay silent while our National History is smashed to pieces during my lifetime.

Join me at the Battlefield in two Thursdays, on September 21st. I really hope that you will.

P.S. Please RSVP to this email so we can plan for enough pie and ice cream. The suggested donation price is $35/person and $65/family.
P.P.S. Please don’t let money be an issue. Join me if you can.

Be the first to comment on "Neil Parrott will fight for your Civil War statues!"