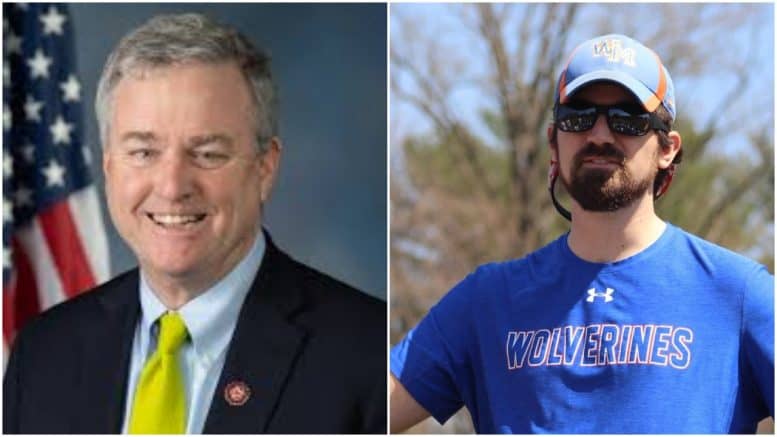 Once considered Maryland’s only competitive congressional district, notwithstanding its heavily gerrymandered boundaries, the 6th District in 2020 is likely to be outflanked by the buzz of the 7th District’s special election and subsequent November election.

Rep. David Trone (D-Md.) is the 6th District’s incumbent congressman, first elected in November 2018. Trone has yet to file for re-election but is expected to again seek the district’s Democratic nomination.

On Friday, 29-year-old Clarksburg resident Maxwell Bero announced in a press release that he will seek the Democratic nomination in Maryland’s 6th Congressional District.

“Our current Congress, and our current congressman, is not doing enough to address the problems facing this country,” Bero is quoted. “I’m tired of sitting on the sidelines hoping for our representatives to step up and do what is necessary,” Baro lamented.

Bero’s press release states that he has been a teacher in Montgomery County Public Schools for the past eight years. He teaches social studies at Watkins Mill High School in Montgomery Village. He also coached football for a year and a half at High Point High School in Prince George’s County, according to his Linkedin page.

Bero holds a bachelor’s degree in political science and secondary education degree from the University of Maryland and a master’s degree in curriculum from McDaniel College, according to his press release.

Bero tweeted Friday that “Trone has done a lot of good for our district in MD as a whole, and I’m proud to have supported him in 2018. But this country needs big, bold leadership, and I’m excited to do my best to bring that to the floor of Congress.”

A statement of organization filed with the Federal Election Commission on Oct. 28 lists Bero serving as his own campaign treasurer.

Bero’s website lists issues on which he is campaigning, including his support for the Green New Deal, a progressive congressional resolution that lays out a grand plan for tackling climate change and economic inequality, first introduced by New York Rep. Alexandria Ocasio-Cortez (D-NY) and Sen. Edward Markey (D-MA).

Trone has not indicated if he supports the Green New Deal.

“As your congressman, I will completely support single-payer Medicare-for-all because there is no reason for any citizen of America to not have the health coverage they need in 2020 (and beyond), Bero’s website states.

In an October 2018 interview with Bethesda Beat’s Louis Peck, Trone was asked if he supported a single-payer, Medicare-for-all system at the federal level. Trone responded that supports a public option, “but,” he wrote, “at the same time, competition is a good thing.”

Bero wrote on his campaign website that he “learned the value of hard work and perseverance growing up on a family farm” in Harford County. His parents, he wrote, live in Point of Rocks. He graduated high school from St. Johns’ Catholic Prep school in Frederick.

“For the last 15 years of my life, I have lived and breathed Maryland District 6,” wrote Bero on his website.

On the surface, Bero appears to be running to Trone’s political left. In his election-night speech last November, Trone promised to find “progressive solutions to big problems.”

Since being sworn into Congress this January, Trone, 63, has focused his efforts on building working relationships within the district among constituents, elected officials and party leaders. He has been especially hands-on in Western Maryland, defying a common criticism that the Western portion of the district is often ignored.

Trone, for his part, has largely steered clear of the national limelight. On occasion, Trone uses his social media accounts to criticize the president.

In September, Trone joined U.S. House Speaker Nancy Pelosi in calling for an impeachment inquiry into the president’s conduct after a government whistleblower came forward to say that Trump pressured Ukranian President Volodymyr Zelensky to investigate Vice President Joseph R. Biden Jr. (D) and his son, Hunter Biden, in exchange for the release of foreign aid.

The multimillionaire businessman-turned-congressman has been squarely focused on finding solutions to fight the rising opioid epidemic, a keystone issue on which he campaigned – and one that directly affects Maryland’s 6th District, especially a number of Western Maryland towns and cities.

Keller in 2016 elevated the fight against opioids in her first bid for the Hagerstown City Council.

Both Keller and Trone have been simpatico in fighting the opioid addiction at the municipal and federal levels, a deeply personal issue to both electeds, spurred by the death of a friend and a family member, respectively. Keller lost a close friend to opioid addiction only a few years ago; Trone lost his 24-year-old nephew to an opioid overdose in late 2016.

USA TODAY featured a guest column written by Trone on Nov. 5. In it, Trone pushed for drug addiction programs that work, including a “permanent, nationwide education program modeled on the Truth Initiative.” Trone wrote that “naloxone and other overdose reversal medications” should be “available in every community across the country.” He also pushed to set money aside to “make evidence-based treatment available for everyone struggling with addiction.”

The first-term congressman has also made education and veterans’ issues a top priority.

In late October, Trone was joined by Texas Republican Congressman Dan Crenshaw in Frederick for a veterans workshop. Crenshaw, also a freshman representative, is former Navy-SEAL who lost his right eye after being injured by an IED blast during a 2012 deployment to Afghanistan.

On Nov. 11 – Veterans Day – Trone is hosting a veterans event in Hagerstown at the Morris Frock American Legion.

While Trone has ostensibly subscribed to a similar bipartisan playbook as his congressional predecessor, former Rep. John K. Delaney (D-Md.), the first-term Democratic congressman is not immune from Republican (and Democratic) criticism.

“Many don’t know that while Congressman Trone tries to appear moderate, he is ranked as more liberal than Congresswoman Alexandria Ocasio-Cortez (AOC) by a progressive group looking at his overall voting record,” Parrott’s email blast – falsely – claimed.

On Nov. of last year, three days after Parrott won his third term representing Washington County in the Maryland House of Delegates, the conservative Tea Party state lawmaker announced during a rain-drenched press conference at the Hagerstown City Park that he was launching a congressional exploratory committee for the 6th District.

Parrott – a self-described evangelical Christan who is opposed to same-sex marriage, abortion and gay rights, and who once advocated that HIV victims should be forcibly imprinted with a government-manded tattoo – is an outspoken supporter of Republican President Donald J. Trump’s policies.

On Trone, Parrot continued, “He has an F- rating from Numbers USA on his illegal immigration stances. Then, just this summer, our Congressman David Trone posted about how he wants more gun control legislation passed. I could go on…It is time for voters to know that he actually votes like an extreme-left liberal. I know what needs to be done, but I cannot do it without help, without knowing that people want me to continue working.”

Trone lives in Potomac, just outside the district’s boundaries.

Parrott has not made a final decision on whether he will seek the 6th District’s Republican nomination, though he is still actively seeking campaign contributions.

Meanwhile, Libertarian-turned-Republican Kevin T. Caldwell was the first to officially file his 6th District candidacy with the Maryland State Board of Elections.

Caldwell, who lives in Brunswick, was the Libertarian Party’s nominee for the 6th District in 2018. He was defeated in the November general election, earning 1.8% of the vote.

Caldwell joined A Miner Detail Podcast for an interview in August 2018.

While Republican Amie Hoeber of Montgomery County has not formally ruled out another campaign, she has told close allies and friends that she is unlikely to launch a third congressional bid, citing Trone’s nearly insurmountable personal wealth.