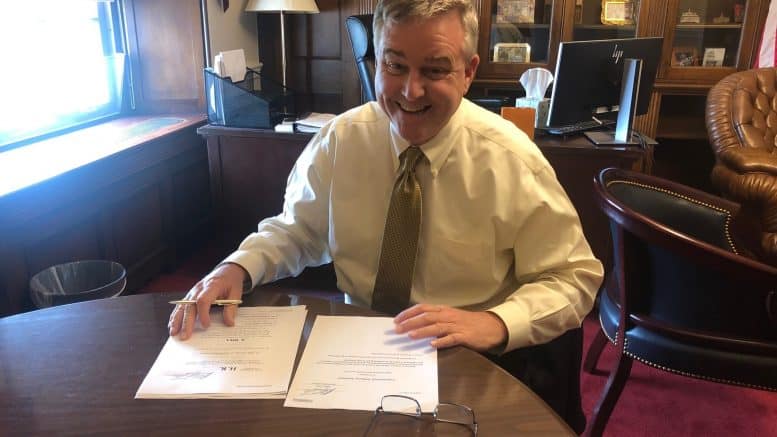 A handful of Republicans who lived and voted in the 6th district boundaries, prior to when the lines were redrawn in 2011 by Maryland’s Democratic supermajority, filed suit, arguing that former Maryland Gov. Martin O’Malley (D), with an assist from Senate President Thomas V. Mike Miller Jr. (D) and the late House Speaker Micheal E. Busch (D), violated their First Amendment rights by intentionally diluting the long-time Republican district with oodles of Montgomery County Democrats.

What happened after the lines were redrawn?

Businessman David J. Trone in 2018 faced off against Republican Amie Hoeber, a former Ronald Reagan appointee. Trone won the seat by 21 points over Hoeber, who also lost to Delaney in the 2016 6th District general election.

So, now what happens?

The 6th District seat will positively remain in Democratic control.

Any Republican looking to challenge Trone – in a presidential election year, no less – should be mindful that the freshman congressman is independently wealthy and will spend what it takes to win re-election.

Trone, moreover, has largely strayed from partisan politics, focusing his attention instead on building relationships throughout Western Maryland and working with local officials on issues tangential to specific 6th District communities.

Trone’s number-one issue is combating the opioid crisis. He’s working with local organizations and elected officials in the District to raise awareness and call to mind the extreme dangers of the national crisis that has taken thousands of young lives, including Trone’s own nephew.

Trone, after six months on the job, has received high praise for doing his job and doing it well. Even some Republicans have warmed to Trone’s hands-on style.

Whether state Del. Neil C. Parrott (R-Hagerstown) decides to move forward with his 6th District bid, it will not matter.

Parrott’s backing of accused child molester Roy Moore for the Alabama Senate seat, his 2005 letter to the Herald-Mail advocating for anyone with HIV to be tattoed, his virtually nonexistent legislative record in Annapolis, and his strong support of President Donald J. Trump will prove to be deeply unpopular political positions in large swaths of Montgomery and Frederick Counties, where the majority of the 6th District voters live and vote.

Parrott last Friday sent out an email blast telling his supporters that he’s “moving forward with the exploratory committee” he formed last year. The same email blast asked supporters to donate to his campaign.

“Will you show your support for common-sense conservatism in Maryland by donating right now to my exploratory committee?” Parrott wrote.

What can Gov. Hogan do?

Honestly, not much at all.

Gov. Larry Hogan (R) issued a statement on Thursday, shortly after the Court handed down its decision. Hogan said that he will continue to push for an independent redistricting overhaul.

However, Senate President Miller issued a statement the same day, pushing the narrative that the General Assembly’s 2011 congressional redrawing is now a done deal for Marylanders. Miller instead called for a national solution to gerrymandering, passing the buck to Congress and President Trump.

The governor did take immediate action after the federal three-judge panel handed down its November decision that called for Maryland’s 6th District lines to be redrawn. Hogan established an emergency commission that was charged with drawing new – and fair – boundaries in the 6th District.

The emergency commission held several public hearings and received input from the public, ultimately settling on a redrawn map submitted by an Oregon resident who writes for the Daily Kos, a liberal political website.

Finally, once the emergency commission completed its work, Hogan submitted legislation to the General Assembly with said commission’s recommendations for the 6th District’s new congressional boundaries.

What happened to Hogan’s bill?

Neil Parrot: Vote for Robin Wivell for Board of Education

Be the first to comment on "The Supreme Court punted on partisan gerrymandering. What happens now in Maryland’s 6th District?"