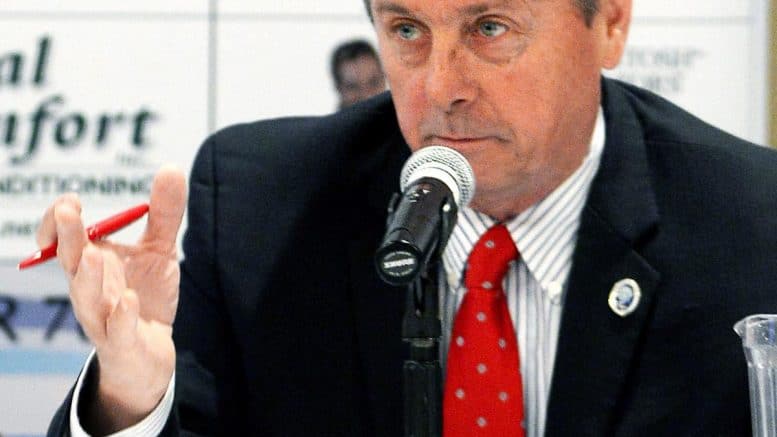 A marital dispute between a Washington County commissioner and his ex-wife is again running hot.

The Bakers separated after a July 2018 incident in which Ms. Baker called 911 to report a domestic dispute between her and her now ex-husband.

Washington County sheriff’s deputies were dispatched to the Baker’s Clear Spring residence on July 12 of last year. When the deputies arrived, Ms. Baker alleged that her husband had physically assaulted her only a few days prior.

The former husband and wife ultimately agreed to settle their divorce before their scheduled May 1 trial date. The court granted the Bakers a limited divorce on May 8, according to online court records.

The Bakers were first married in July 1992.

But now, Katrina Baker says, her ex-husband is in contempt of their lengthy divorce agreement, which was signed by the former couple before a Washington County Circuit Court judge.

“He’s not giving me anything,” Katrina Baker told A Miner Detail. “Terry is violating our agreement and is making my life a living hell.”

Ms. Baker said she was forced to take action as a result of her ex-husband reneging on their divorce agreement.

On the last day of May, Katrina Baker’s attorney, Dana Hadigian, filed petitions with the court on Ms. Baker’s behalf to hold Baker’s ex-husband, Terry Baker, in contempt of the couple’s divorce agreement.

Ms. Baker says that her ex-husband has since refused to hand over several pieces of the couple’s personal property, as listed in the Bakers’ divorce agreement, including at least 18 or more firearms.

Commissioner Baker, who has not responded to A Miner Detail’s multiple requests for comment, has 30 days to respond to the contempt petition.

Mr. Baker was issued a summons on June 28, according to online court records.

Ms. Baker shared with A Miner Detail that she made an appointment an hour after the divorce was finalized with the Hagerstown City Police “with police officers present” to give her “the list of guns,” which was part of their divorce agreement.

She said her ex-husband handed over only half of the firearms that belong to her.

In addition to Baker’s refusal to return the firearms that belong to his ex-wife, Ms. Baker said that her ex-husband has not yet verified the agreed-upon life insurance policy that was also listed in their divorce agreement.

“Terry won’t do anything that is laid out in the agreement. He is intentionally being hateful.”

Ms. Baker said that she sustained mental and sometimes physical abuse in her marriage to Commissioner Baker.

But the emotional abuse, she said, cut the deepest.

“Terry would also tell me that he took me out of the projects and can put me back in,” Baker said,

“I had two young kids when I met Terry, and he reminded me often that he gave me a better life, that I was beneath him and that he could put me back down.”

Be the first to comment on "Katrina Baker says her ex-husband, Commissioner Terry Baker, refuses to abide by divorce agreement, files contempt petitions"