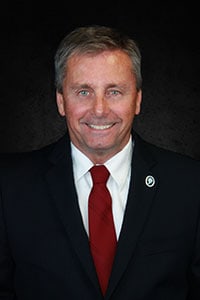 The incident, law enforcement sources say, revolves around an apparent dispute between Baker and his wife, Katrina Baker.

Baker has not responded to A Miner Detail’s emailed request for comment.

A Miner Detail filed a public information request today with the Washington County Sheriff’s Office in Hagerstown. A Sheriff’s Department official referred to the July 12 incident as a “disturbance” and provided A Miner Detail a case number: 1084700.

Washington County Director of Public Relations and Marketing Danielle N. Weaver, when reached, referred to the Baker incident as a “personnel matter,” telling A Miner Detail that “the County does not speak to personal matters.”

Baker was cited on July 2 for “driving a vehicle on a highway with a suspended registration” by Washington County Sheriff’s Deputy Louis Alvarez, according to Maryland court records. Baker was stopped at 5:31 a.m. on July 2 on Interstate 70 eastbound at exit 24, the record shows.

Baker was first elected to the Washington County Board of County Commissioners in 2006. He has won re-election in 2010 and 2014. In 2016, Baker unsuccessfully sought the Republican nomination for Maryland’s 6th Congressional District.

Baker is seeking a fourth term on the Commissioner board.

Cline planning a rally in protest of ethics complaint