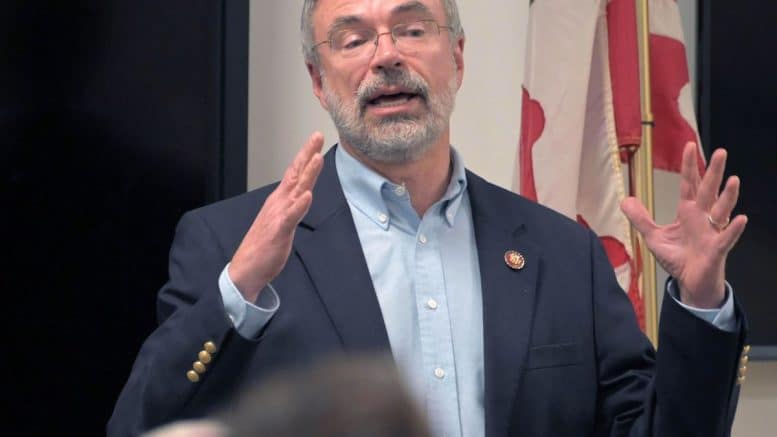 Per pooler @fran_chambers, Rep Andy Harris (R-Md.) was spotted fighting with a WH advance staffer at the Baltimore event.

Via Francesca: “members of the press overheard Harris yelling ‘bulls***’ at the staffer loudly.”

Chambers, a White House correspondent for McClatchy‘s Washington, D.C. bureau, confirmed with A Miner Detail that she “included what was observed in a pool report” and that “another member of the White House press corp tweeted the report.”

“Before the president arrived, Congressman Harris, who was seated in the last row of chairs for attendees, up against the bike rack that separated press from the rest of the event, was seen engaging in a dispute with a White House advance staffer,” Chambers reported.

“The context of the conversation between Harris, who raised his voice at the advance person, was not clear, but members of the press overheard Harris yelling, ‘bull****’ at the staffer loudly.”

Dutton, according to Nelson’s tweet, called the report “fake news.”

‘This is fake news. In order to be heard, as is necessary when wearing a face shield, he was speaking loudly to the staffer discussing outdoor CDC guidance. Of course, he did not curse at anyone.’https://t.co/FEPrkn1tlS

Harris, who lives in Baltimore County, “wore a full face shield” today, reported The Baltimore Sun. He picked up the face shield from a Maryland company, Hardwire LLC. The Eastern Shore company employs his son as a sales director, The Sun reported.

A Miner Detail reported Friday that Harris called Maryland Republican Party Third Vice-Chairman Matthew Adams Friday and cursed and screamed at him before hanging up the phone, “Adams told A Miner Detail.

Adams said Harris called him a “fu***** a******” for mentioning his wife, Nicole Beus Harris, in a blog post Adams published Friday to his Maryland political site Fight for Maryland.

After only a minute or so into the call, Harris hung up on Adams but not before Harris threatened to “fu***** take him down,” Adams said.

“He was so belligerent that I could hardly keep up with him. He just kept screaming at me,” Adams told A Miner Detail on Friday in an interview.

Dutton confirmed Harris called Adams on Friday but denied he cursed at him.

“Mr. Adams’ quote about the Congressman cursing in unequivocally a lie as well,” Dutton wrote in a statement.

Trump’s Memorial Day Fort McHenry address honored men and women who died in uniform. He compared the fallen military servicemembers to those currently battling the coronavirus on the front lines.

Republican Gov. Larry Hogan did not attend Trump’s Baltimore speech, telling reporters that he was spending the day at home with his family, celebrating his 64th birthday.

Baltimore City Mayor Bernard C. “Jack” Young, a Democrat, pressed Trump not to visit Baltimore on Monday because it would violate the governor’s coronavirus stay-at-home order that is still in effect.

The White House overlooked Young’s concerns, citing “the brave men and women who have preserved our freedoms for generations” who did not stay home, The Sun reported, quoting White House spokesman Judd Deere.