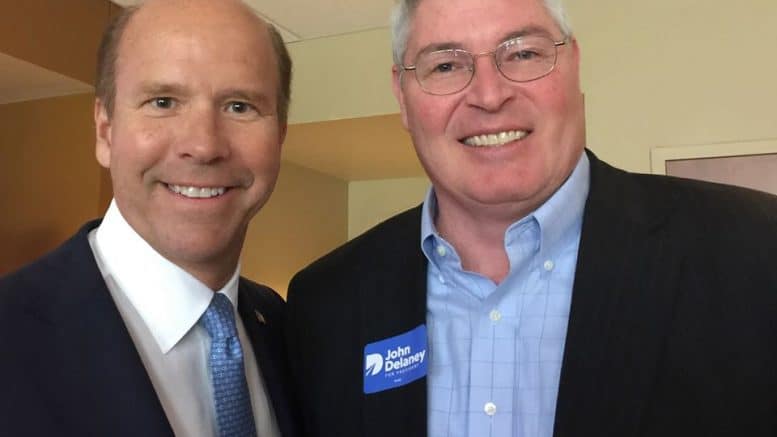 Perini announced the four endorsements on his campaign Facebook page.

Endorsing Perini, Delaney, who announced last year that he is running for president in 2020, said this:

“I am pleased to endorse Peter Perini for the Maryland House of Delegates. Peter has been a true leader in Hagerstown and will make a great Delegate. I encourage everyone who supports me to in turn support Peter.”

Perini is the current vice chairman of the Washington County Democratic Central Committee and is the owner of Perini Landmark Development Corporation.

Perini released the following statement to A Miner Detail in January shortly after he filed his candidacy paperwork:

“It has been a pleasure to live in Hagerstown throughout my lifetime. I take pride in this community, it’s rich history and the promise of its bright future. And it is with great excitement that I am running for Maryland House of Delegates District 2B. I am confident that my knowledge and experience working for the betterment of this community paired with my vision for and commitment to a strong future will be an asset to Hagerstown. I will work hard in the coming months to gain the confidence of voters.”

District 2B was represented by former state Del. John P. Donoghue (D-Hagerstown) for 24 years until 2015. Washington County Associate Circuit Court Judge Brett R. Wilson, a Republican, mounted an aggressive campaign in 2014 and ousted the longtime incumbent by 614 votes in the November general election.

Wilson served District 2B until November 2017; Gov. Larry Hogan (R) appointed Wilson to serve as an associate judge on the Washington County’s Circuit Court. The Washington County Republican Central Committee interviewed three Republicans for the vacated seat and settled on Paul D. Corderman, a Hagerstown City councilman at the time, to fill the remainder of Wilson’s term.

Corderman filed his District 2B candidacy paperwork shortly after he was sworn into the Maryland House of Delegates on Dec. 20, 2017.

After filing, Corderman released a short statement, saying that he “chose to file for candidacy on the same day he was sworn in as Delegate to demonstrate to the community his commitment to the citizens of Hagerstown goes beyond just the near future and 2018.”

District 2B is one of many legislative districts Maryland Democrats are targeting this election cycle. Maryland Democrats and Republicans alike are expected to spend significant resources to recapture and retain the district. Perini and Corderman are unopposed in their respective primaries. The two men will face off against one another in the November general election.

According to Ballotpedia.org, as of the 2010 census, “a total of 40,661 civilians reside within Maryland’s state house district 2B. Maryland state delegates represent an average of 40,947 residents.”

Maryland’s primary is set for June 26. The November election will be held on Nov. 6.

City of Hagerstown delegate vacancy has already been decided

Be the first to comment on "Perini endorsed by O’Malley, Cardin, Van Hollen and Delaney"