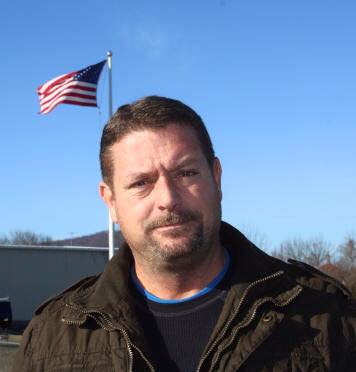 Shortly after Frederick’s county council meeting concluded this evening, Donald posted to his public Facebook page about an incident in which he claims Kirby Delauter, who is running for Frederick County executive, called him a “pussy” and apparently asked him to walk outside over a disparaging Facebook meme posted on Donald’s Facebook page that is aimed at Delauter.

When reached for comment, Delauter told A Miner Detail that Donald has a photo of himself apparently assaulting him [Delauter].

“I simply showed it to him and asked him to take it down out of respect for the office,” Delauter said.

Delauter went on, telling A Miner Detail, “I did not challenge him to a fight. I simply told him that since he wanted to post pictures of him physically assaulting me, I was there maybe he’d like to give it a shot.”

Councilwoman M.C. Keegan-Ayer, who witnessed the brouhaha between Donald and Delauter, also took to Facebook to recount her version of the incident. 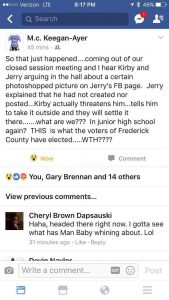 Delauter said he walked away from Donald, and Donald responded, “don’t walk away from me.” Delauter said he turned around and said, “Here I am, give it your best shot. He did nothing. I walked out of the building at that point.”

“Simply out of respect for the office, he should know not to put stuff like that out there. I purposely did this in private but he and MC choose to continue to make the council look foolish,” Delauter told A Miner Detail.

Delauter says Otis threatened him and his family