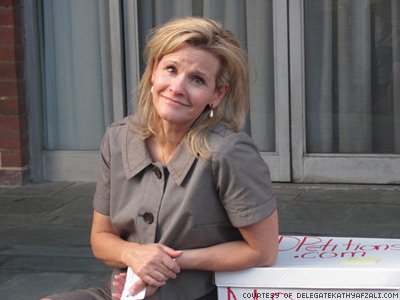 Frederick County Councilman Kirby Delauter isn’t pulling any punches when it comes to Del. Kathy Afzali – his likely opponent in the 2018 Republican race for county executive in Frederick.

This week, Delauter released a recorded telephone poll of sorts that asked Frederick County Republicans whether they would support him or his presumptive Republican opponent, Kathy Afzali, for county executive, followed by three questions about Afzali’s record as a state delegate.

Afzali, a strong ally of State Senator Michael Hough, said she will make her political intentions known this fall. Last month, Afzali released a statement announcing that she will not seek re-election to the Maryland House of Delegates in District 4.

Delauter’s polling questions and subsequent memo that concluded that Frederick Republicans switched their support to Delauter after learning about Afzali’s political positions tweaked the Middletown delegate enough to release her own statement critical of Delauter.

Returning fire, Afzali blasted out an emailed statement to her supporters, using Trumpian verbiage that accused Delauter of being part of the Frederick County swamp and writing that Kirby is “desperate.”

Afzali even wrote that she feels sorry for Delauter: 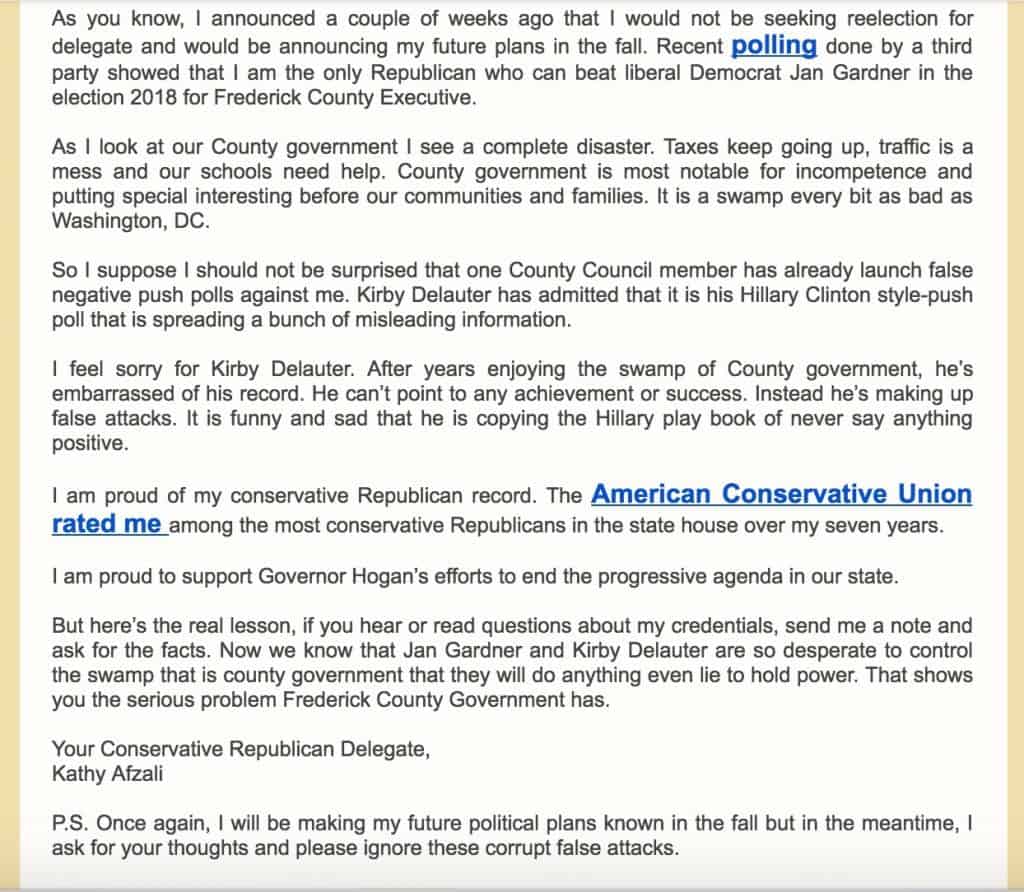 Reached by email, a Delauter campaign spokesman swatted back at Afazli, writing,

As much as she’d like to, Delegate Afzali can’t run from her liberal votes; they’re right there in the public record.
You can’t vote for the budget of the most liberal Governor in Maryland history — which increased spending by $1.5 billion — and then call someone a liar when they call you out on it.
These are important issues that Republican voters in Frederick County care about; it’s unfortunate that Delegate Afzali didn’t care enough about them when she was busy making bad votes in Annapolis.
Councilman Delauter’s voting record, on the other hand, is perfectly clear — he’s cut over 200 taxes and fees, shrunk the size of County Government, and stood with Sheriff Jenkins against harmful sanctuary county policies.

Afzali has been involved in multiple public spats with Frederick County officials, including an infamous incident that occurred a few years ago in which Afzali once sent a disparaging text message to Sheriff Chuck Jenkins during a public event.

One county executive candidate, however, failed to grab an honorable mention in the crossfire between Delauter and Afzali: Frederick County employee Regina Williams, a Republican. Willams, a well-known county employee, was once was involved in a romantic relationship with former Frederick County Commissioner Blaine Young.

So, the question remains: Of the three interested Republicans, who is best equipped to challenge Jan Gardner in a November 2018 general election?

Delauter says Otis threatened him and his family