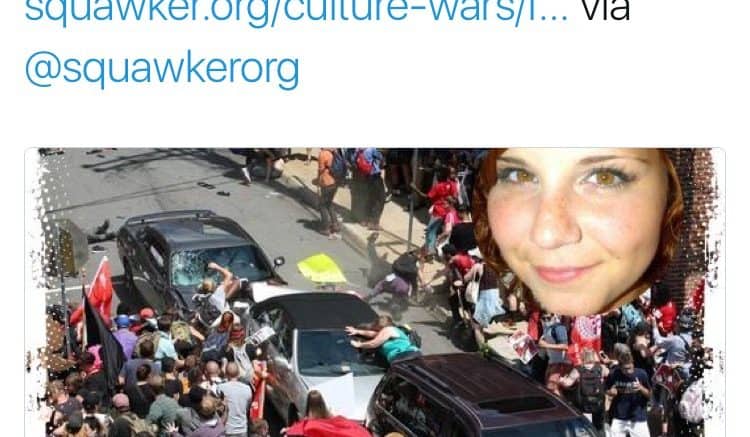 The Maryland Federation of Republican Women’s Twitter account took an alternative right turn yesterday, tweeting a dubious link from Squawker.org, a right-wing conspiracy site that bills itself as a “fact checking website meant to counteract the stunning phenomena of fake news.”

MFRW’s tweet (below), which has since been deleted, links to a Squawker article that claims 32-year-old Heather Heyer was not murdered in Charlottesville, Va. by James Fields – the 20-year-old man with strong white supremacists ties who was charged with second-degree murder after ramming his Dodge Challenger into a crowd of people on August 12, 2017 – but rather left-wing protesters “began to demolish Fields’ car, causing him to “panic” and subsequently running over Heyer “in a frenzy.” 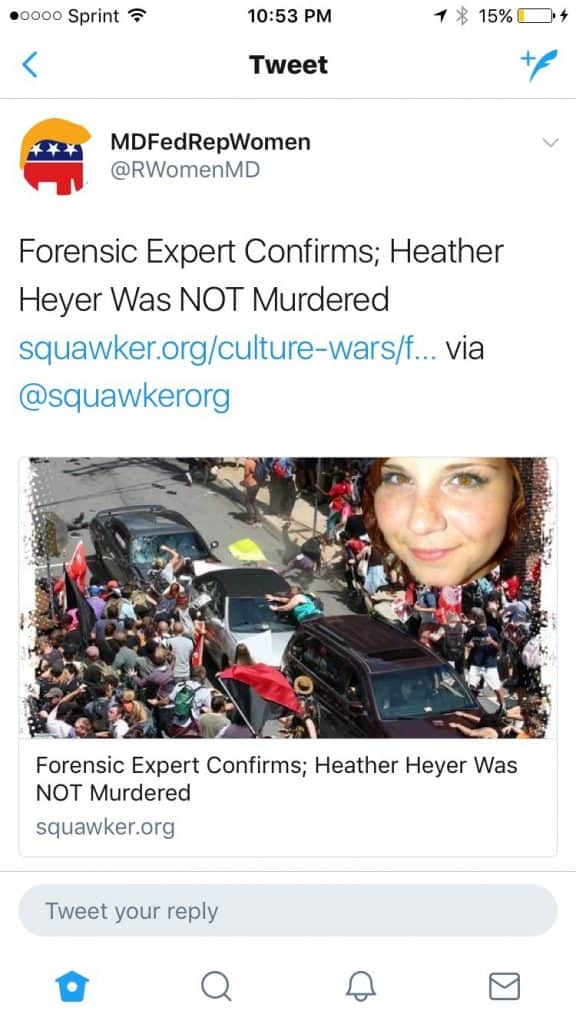 The Squawker article quotes an anonymous “forensic expert” who claims that Heyer was “not murdered by collision with Field’s car.”

According to this expert, the position of Heyer’s body on the front of the car was inconsistent with the course of the car striking her. This, of course, places a large boulder in the path of Fields’s accusers, who wish to see him executed for domestic terrorism. If a forensic scientist and long-time policeman can say with confidence that her body could not have been hit by the vehicle, then what evidence can stand against that?

Firstly, video footage shows James Fields’ car was under attack by several people. His natural reaction was likely fight or flight, rather than sitting there and letting himself be exposed to harm. Fields’ plea for innocence may be helped by the fact that he waited quite a while for the streets to clear. It appears Fields’ did not have the intent to kill but was provoked by an attack.

The anonymous source even blames Hayer for causing her own death.

If prosecutors find that Heyer was already climbing on the gray vehicle, they wouldn’t even be able to get a manslaughter charge on Fields, let alone a second degree murder charge. While it is sad, Heyer acted illegally by climbing on somebody else’s car in the first place. She put herself at risk.

Finally, the source accuses the mainstream media of painting a false narrative of Heyer’s death.

However, this is not the framework that the mainstream media desires the world to look through; rather, Heyer is to be depicted as a martyr and inspiration for us all – as an innocent victim who was brutally murdered by a raging Nazi lunatic in a gray car.

A Miner Detail emailed the president of the Maryland Federation of Republican Women, Elizabeth League, this morning, requesting comment on its latest tweet.

My name is Ryan Miner and I am the Editor-in-Chief of AMinerDetail.com, a Maryland political blog.

Last night the Maryland Federation of Republican Women’s Twitter account tweeted a link to the Squawker.com article “Forensic Expert Confirms; Heather Heyer was NOT murdered.” The article is written by an author from an obscure website known to promote and promulgate unproven and outlandish right-wing conspiracies.

I have a few questions:

2) Does the entire Maryland Federation of Republican Women stand by the latest tweet that quotes a conspiracy website, questioning the death of Heather Heyer?

3) Is the Maryland Federation of Republican Women trying to mitigate white nationalism? Has the Federation released a statement condemning white supremacists, the KKK, Neo-Nazis, etc.?

4) What is the purpose of tweeting the article? Has the Federation released a statement showing sympathy to Heather Heyer’s family?

I am writing an article and will be publishing it later today. My deadline for comment is 2:00 p.m. this afternoon.

League later responded to A Miner Detail’s request for comment at 9:16 a.m.

I am shocked that you interpreted the tweet as an MFRW endorsement of white supremacy.  The tweet was meant to show how low society has sunk; completely the opposite of what you are implying. The MFRW condemns white supremacy and the events that resulted in the death of this poor woman. Regarding the comments made by you and others on Facebook, we are an all volunteer multicultural organization that works hard for the cause of limited government, strong military and free enterprise. We are undeserving of the backlash that you and others displayed over your misinterpretation of a tweet.

A Miner Detail followed up again with League but received no response since.

You did not answer my questions, so I’ll ask them again:

The Twitter account associated with your organization is responsible for tweeting a link to a “news site” that questions whether Heather Heyer, whose death was ruled a homicide by police, was actually murdered. What is the correct interpretation? As the president of the Maryland Federation of Republican Women, where is your statement condemning Heather Heyer’s murder?

I will be following up with the National Federation of Republican Women this morning as well as the chairman of the Maryland Republican Party and Maryland’s Republican national committeewoman, Nicolee Ambrose.

MFRW’s Twitter feed has been known to stir controversy in the past, often tweeting links for Breitbart News and other right-wing websites.

Imran Awan went to bar with Seth Rich day he was killed https://t.co/mOBJYLtfLE