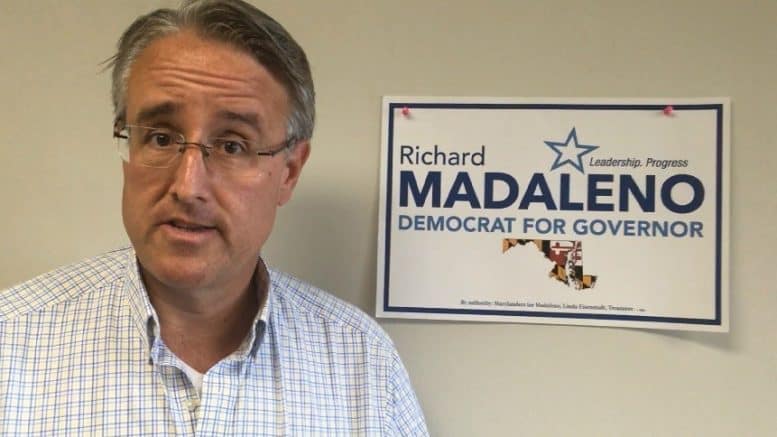 Maryland state Sen. Rich Madaleno’s gubernatorial campaign released a statement today comparing Donald Trump’s tax plan to the horror movie Return of the Living Dead while calling on Republican Gov. Larry Hogan to “break his usual silence and step up for Marylanders by walking away from his Republican leaders and their trickle down tax plan.”

Madaleno’s statement can be seen below:

Democratic gubernatorial candidate Madaleno calls on Gov. Hogan to “break his usual silence and step up for Marylanders”

“The Paul Ryan/Donald Trump tax plan is like watching Return of the Living Dead – we’ve seen this nightmare before and the havoc it wreaks on working families,” said Madaleno. “The Ryan-Trump tax plan is a blatant giveaway the Republican Party’s billionaire backers and a massive tax hike on hundreds of thousands of Maryland families. Larry Hogan needs to break his usual silence and step up for Marylanders by walking away from his Republican leaders and their trickle down tax plan.”

“For the past 3 years I’ve proposed real change to our tax code that would help lift people out of poverty, encourage work and create opportunities for Maryland families and young people. I am more than willing to work with Governor Hogan on common sense changes to our tax code, like an Earned Income Tax Credit expansion I’ve authored, that will support working families while also maintaining our investments in Maryland,” continued Madaleno.

Rich Madaleno has served Montgomery County for 15 years in the Maryland House and Senate. He is an expert on budget issues, serving as Vice-Chair of the Budget and Taxation Committee.  And Rich has been a leader in passing legislation on key progressive issues like marriage equality, ensuring funding for Planned Parenthood, investing in education, and protecting the environment.

Be the first to comment on "Madaleno knocks ‘Ryan/Trump’ tax plan; calls on Hogan to ‘break his usual silence’"