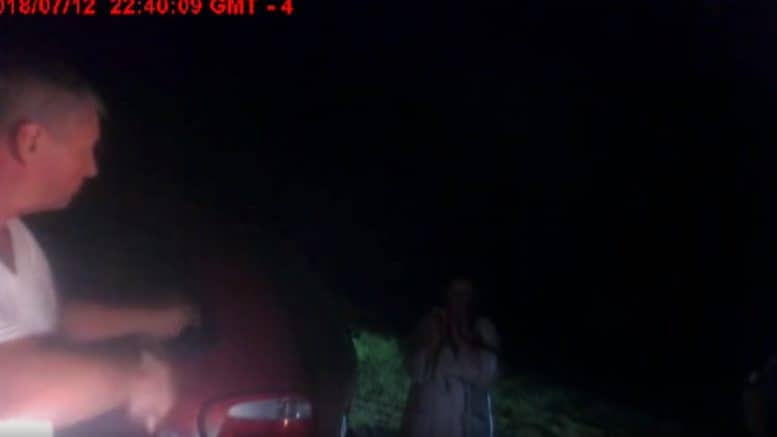 The wife of Washington County Commissioners President Terry L. Baker (R) on July 12 told a Washington County sheriff’s deputy that her husband years ago was “let go” by police after being stopped for driving a vehicle while intoxicated, according to the body camera video.

A Miner Detail filed a public information request a little over a week ago with the Washington County Sheriff’s Department and Washington County government to obtain the 911 recordings and body camera footage of the July 12 domestic disturbance call at the Bakers’ home in Clear Spring.

Katrina Baker dialed 911 on July 12 shortly after 9:00 p.m. and was connected to the Washington County 911 center. Mrs. Baker told the 911 operator that she was “having domestic issues with her husband,” Washinton County Commissioners President Terry Baker. She later told the 911 operator that her husband assaulted her the week prior at their home in Pocahontas County, West Virginia.

Mrs. Baker told one of the deputies who was dispatched to their home that her husband assaulted her at their West Virginia home after an argument over misplaced four-wheeler keys.

“Why’d you hide them fucking keys?” Mrs. Baker recalls her husband screaming at her at their home in West Virginia.

“I’m still not taking it all in because I’m sleeping. So, I said, ‘I didn’t hide them.’ So I go out to the kitchen to get my cigarettes. I couldn’t find my cigarettes. Finally, he … throws them at me. I thought, ‘he’s in a mood.’ So I go get a water and I go to take my medicine. And my medicine was gone. He hid my medicine somewhere. And I’m like, ‘why is he messing with me?’ So, after that, I’m still sitting there, and all of sudden he starts yelling….”

Katrina Baker is heard on the video telling the sheriff’s deputy that her husband shouted in front of his sister that he “fucking hates” her, and then calls her “a fucking cunt.”

“I just went blank when he called me a fucking cunt,” Mrs. Baker is heard telling the deputy.

After calling her a “cunt” and exclaiming that her was was leaving their West Virginia home, Mrs. Baker told the deputy that her husband slapped her in the face and on the neck.

Twenty minutes later, Mrs. Baker is heard telling the deputy that her husband “doesn’t think rules apply to him.”

“He got a ticket last week and he… calls Mullendore,” Mrs. Baker tells the deputy, referring to Washington County Sheriff Douglas W. Mullendore.

Baker was cited on July 2 for “driving a vehicle on a highway with a suspended registration” by Washington County Sheriff’s Deputy Louis Alvarez, according to Maryland court records. He was stopped at 5:31 a.m. on July 2 on Interstate 70 eastbound at exit 24, court records show.

“And then, you know, if he’s talking on his cell phone. He’s already got, I don’t know, how many warnings. And he’ll say, ‘they’re not going to give me a ticket.’ And it’s just the kind of mentality that I’ve got to deal with … And with the phone violation, he don’t get nothing; they just let him go.”

“And years ago, the DWIs – they just let him go; they take him home. And I’m like, this is the kind of guy I’m with for 28 years who gets his way. And he has to have his way with me.”

I can tell you that none of that is true. I will not allow anyone to use their position to try to get out of anything they have done wrong. As you will see if you go onto case search, Terry Baker will be going to court on his suspended registration.

I receive calls from private citizens periodically complaining about citations and such. I always explain to them their testimony in court will determine their guilt or innocence. I do not overrule my Deputies on what actions they take, unless they didn’t take action when it was appropriate to do so.

Baker and his attorney, D. Bruce Poole, did not respond to A Miner Detail’s request for comment.

On Thursday morning, Katrina Baker withdrew her petition for a protective order she filed last week against her husband. The Bakers told District Court Judge Mark D. Thomas that they reached a settlement “regarding marital issues.”

Baker’s attorney, D. Bruce Poole, told media present for the hearing that “Mr. Baker did not commit the assault alleged and he did not abuse his wife.” Katrina Baker and Terry Baker are separating, according to Poole.

Kelly Clopper, a staff attorney for Citizens Assisting and Sheltering the Abused, who represented Katrina Baker at Thursday’s protective order hearing, told media that Mrs. Baker stands by her original statement that her husband physically assaulted her at their West Virginia home.

Terry Baker was first elected to the Washington County Board of Commissioners in 2006. He won re-election in 2010 and 2014. Baker ran unsuccessfully in 2016 for Maryland’s 6th Congressional District.

He is seeking a fourth term on the Commissioner board.