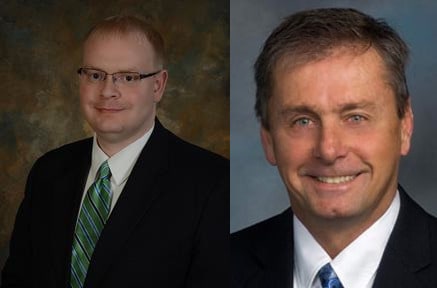 Three Washington County commissioners met together in private on Monday, July 16, to discuss releasing the findings of two heated reports – one stemming from the allegations of sexual harassment aimed at Commissioner LeRoy E. Myers Jr. and another from a county investigation that identified Commissioner Jeff Cline as leaking information about the case – violating Maryland’s Open Meeting Act, according to two sources with knowledge of the meeting who spoke to A Miner Detail on background.

Commissioners President Terry L. Baker, Wayne Keefer and LeRoy Myers met together in Clear Spring, Md. on the evening of July 16 at one of Myers’ properties – either at Myers’ home or his business office on National Pike – to solidify a strategy to release information from the two investigations during Tuesday’s county business meeting the following day, two sources confirmed.

Herald-Mail Media reported on July 17 that Commissioner Keefer “toward the end of the July 17 commissioner meeting again pushed to release more information to the public from the reports.”

Sarah Lankford Sprecher, Washington County’s former assistant county administrator, alleged in March 2017 that Myers, who is not seeking reelection, groped her during an October 2016 county business development trip to South Korea. Sprecher maintains that after she rejected Myers’ sexual advances, he took “predatory and offensive sexual and related actions against her.”

During the July 17 commissioner meeting, Keefer, who was appointed to the commissioner board in 2016 by the Washington County Republican Central Committee, made the motion to release the two reports with redacted information, claiming to release the reports under the guise of transparency.

County Attorney John M. Martirano pushed back against Keefer’s idea to release information from the reports, stating publicly that doing so would be against his recommendation.

Commissioner Cline also pushed back against releasing the information contained in the reports.

“Not one employee ever in the future in Washington County will ever come forward to reveal alleged wrongdoing” if they believe their name will be revealed.

A county official who agreed to speak to A Miner Detail on background said that if Keefer, Baker and Myers failed to advertise their meeting and produce an agenda, their private meeting would be in violation of Maryland’s Open Meetings Act.

Maryland’s Open Meetings Act requires any “public body to give ‘reasonable advance notice’ of its meetings, to make an agenda available in advance except in cases of emergency, to hold its meetings openly, to adopt minutes, and to retain them for 5 years.”

“LeRoy, Wayne and Terry have been meeting frequently for over a year and a half behind closed doors without Jeff and John,” the county employee told A Miner Detail.

Commissioner Barr told A Miner Detail on Monday that he was “not aware” that his commissioner colleagues – Baker, Myers and Keefer – met prior to the release of the reports.

Cline, when reached Monday, also told A Miner Detail that he was not informed of the July 16 meeting between Baker, Myers and Keefer.

“To the best of my knowledge, there was no public notice nor was I personally informed,” Cline said in a text message to A Miner Detail.

Baker, Keefer and Myers have not responded to A Miner Detail’s emailed request for comment. A Miner Detail carbon copied Hagerstown attorney Bruce Poole to the same email. Poole represents both Myers and Baker in separate legal matters. Poole has not responded.

Barr, who recently left the Republican Party and registered as an unaffiliated, is also seeking another term on the commissioner board.

Be the first to comment on "Three Washington County commissioners said to have met in secret before sexual harassment report was released: Sources"