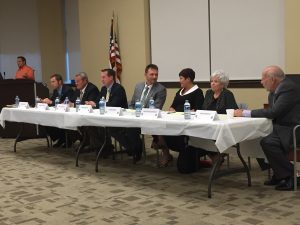 About 40 people – more than half who reside within the City of Hagerstown – attended a Hagerstown Mayoral and City Council forum on Wednesday evening – September 21 – that was jointly hosted by the Hagerstown Tea Party and the Washington County Republican Club.

City Councilman Donald F. Munson, also a candidate for re-election, refused to attend the joint Republican/Tea Party forum, according to the forum’s organizers, because “he could get more out of door knocking than attending this forum.” In Part 4 of the video linked below, candidate Paul Corderman took a subtle swipe at Munson for his failure to appear.

Each mayoral and City Council candidate was provided two minutes for opening statements and ninety seconds to respond to questions. Hagerstown Tea Party President Donny Ravas, who moderated the first half of the forum, opened the event by announcing that questions were taken from the community. The forum took a brief ten-minute intermission at 8:00 p.m. and resumed at 8:10 p.m. for the second half; Jerry DeWolf, a Washington County Republican Club Central Committee member, moderated.

Early voting in Maryland begins October 27 and extends until November 3. The general election will be held on November 8.