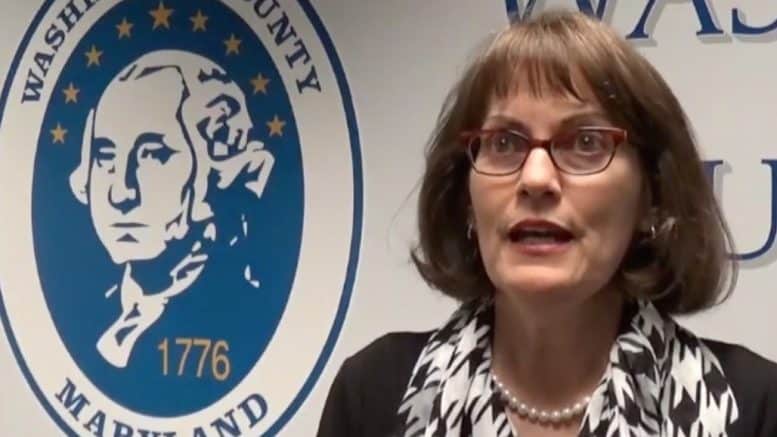 Washington County Administrator Rob Slocum would not say whether Kathleen “Kassie” Williams willingly left her county government job on Tuesday or if she was fired, ambiguously telling Herald-Mail Media that her sudden departure was a “personnel matter.”

It turns out that Lewis was actually fired, sources inside county government told A Miner Detail on background.

Lewis was Washington County government’s economic development director just shy of four years. She was hired in August 2014 by a 4-1 vote of the county commissioners. Commissioners President Terry Baker voted against her.

“You will note that the newspaper showed that Baker opposed Lewis because he wanted to wait for the new board to come in.  That is because [LeRoy] Myers, who was not elected yet, heard everything from Baker that occurred during closed session and wanted someone other than Kassie. That started it. The two were against her from the beginning,” a county government source with knowledge of Lewis’ firing said.

Some in county government are questioning why Lewis was fired when she was only recently given a raise.

“Presumably they will say she was fired over performance, but she was just given a raise, as was the department. Unemployment is the lowest it has been in years; business permits are booming, etc.,” said a source inside county government.

“Kassie was complaining of [him] creating a hostile work environment, left unchecked by Slocum, which led to a complaint from DBD staff, followed by his resignation. Coincidentally, soon after the guy resigned from the EDC board, Kassie was terminated,” the source told A Miner Detail.

Other sources in county government told A Miner Detail that Lewis was a frequent target of embattled Commissioner LeRoy Myers Jr.

“After successfully demeaning Sarah to a point where she was humiliated and ineffective, which caused her to resign, Myers then moved in on Kassie, who was his target since taking office. Myers said so frequently.”

Sources close to Slocum told A Miner Detail that his lack of leadership made Lewis’ job considerably difficult.

“Without giving direction of any kind, Slocum waffled between what the EDC wanted to do under Bockrath’s influence while blaming Kassie for the lack of results. He [Slocum] went from wanting to demote her last year – to more recently arguing for an upgrade for Kassie and her staff because of the great job she was doing – to arguing for Bob Mandley to be put out to pasture because he wasn’t doing anything. Now they fired her,” the sources said.

One county staffer who emailed A Miner Detail on background lamented the county’s lack of direction at the behest of Slocum.

“It is obvious that the direction of the county is completely erratic and unproductive at best; and true to form, Slocum will blow with the wind, fire her, and try to fall back on someone else’s idea instead of taking control and moving Washington County forward. He cannot produce, so he finds someone else to fire.”

The source went on:

“And why is there no direction? Any department head that has an independent thought or who is competent, they have to been eliminated if they cannot be controlled. Sarah, Debbie, Julie, Kassie, Vicki Lumm and James Jenkins have left or are leaving because of the horrible conditions in the county. Gone. And replaced with Hovis, who has no qualifications other than enjoying firing people and saying yes to Rob Slocum.”

County attorneys recommended that the commissioners not comment on the Lewis’ termination, Herald-Mail Media reported.

The county will soon begin its search for a new business development director.

The sexual harassment swamp that is Washington County