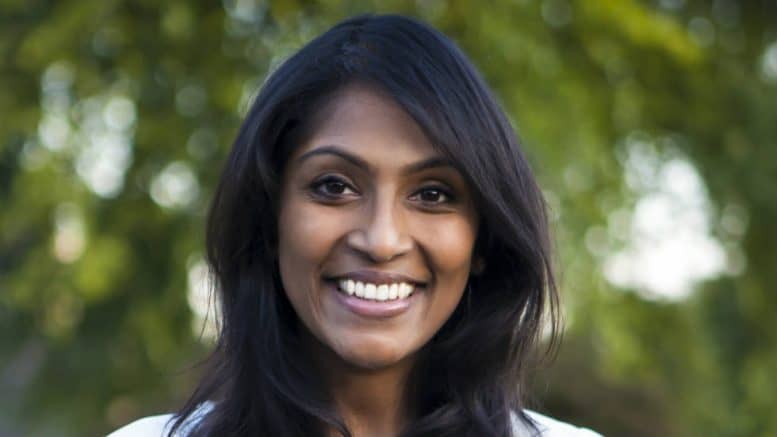 Maryland Democratic gubernatorial candidate Krishanti Vignarajah released today a plan to combat sexual harassment and sexual violence in government, business and in schools and characterized herself as a survivor, using the viral social media hashtag #MeToo in a deeply personal candidate statement.

Vignarajah is quoted as saying “she has been hesitant to say #MeToo, out of fear of being defined by it and out of respect for survivors who have suffered far worse.”

BALTIMORE, Maryland – Gubernatorial Candidate Krish Vignarajah released a comprehensive, first-in-the-nation plan to combat sexual harassment and sexual violence in Maryland.  Committed to ending the culture of misogyny and its toxic effects in business and government and on school and college campuses, Krish announced a bold proposal to (1) create an Office of Sexual Harassment and Violence charged with incentivizing independent audits of harassment in government and business workplaces, certifying gold-standard employers, ensuring wraparound services for survivors, and supporting law enforcement to end the rape kit backlog; (2) require disclosure to confirm those seeking public employment or state business have no history of sexual harassment and violence; and (3) ensure that all college, high school and middle school students—not just men—are educated early and often about robust concepts of consent.

“As a survivor, I have been hesitant to say #MeToo, out of fear of being defined by it and out of respect for survivors who have suffered far worse—but too many have endured too much for too long for me to remain silent,” said Krish. “The courage of survivors should inspire us to act—and to act now. Sexual harassment and sexual violence have no place in society, especially in government. Maryland has been a moral leader on so many of our country’s hardest issues, and my plan is meant to follow in that tradition. My plan reflects that more is needed today to fix a society that tacitly condones sexual harassment and silences victims.”

“Sexual predators exploit a culture of silence and impunity driven by differences in power and status,” said Ashley Judd, actor and humanitarian. “Krish’s policy will both help shed light on rampant sexual harassment and create concrete solutions that improve gender norms. Krish has articulated actionable steps in a first-in-the-nation plan that (1) helps men understand and improve their behavior, (2) holds men accountable, (3) provides critical support and resources to survivors, and (4) combats a culture of fear, secrecy, and shame. Increased equality and partnership between male and female colleagues is good for business and good for society.”

From classrooms and boardrooms to hotel rooms and the halls of government, the deplorable acts of sexual harassment and violence that have surfaced in recent weeks are not isolated incidents. Nearly half of all women have personally experienced an unwelcome sexual advance or verbal or physical harassment at work, and 17% of women survive sexual violence in their lifetime.

Maryland has important laws and administrative policies in place to address sexual harassment and assault, but more is needed. Krish’s proposal is meant to build on what we have done, address specific shortfalls, and make sure Maryland is showing the leadership this issue demands.

The full policy is attached, and highlights of the proposal are below:

o   Conduct independent audits and certify gold-standard employers: Incentivize companies to audit sexual harassment among employees at every level and provide certification and preference in government procurement for leading companies.

o   Create anonymous hotline and wraparound support services for survivors: Ensure that reports are acted upon immediately, survivors receive the support they need, and repeat predators are detected through innovative technologies.

o   Oversee an internal audit of state government: Conduct a government-wide sexual harassment audit by a third-party evaluator and share the results.

Krish Vignarajah will announce her gubernatorial campaign on September 19

Be the first to comment on "Vignarajah says she is #MeToo, releases plan to combat sexual harassment and sexual violance"