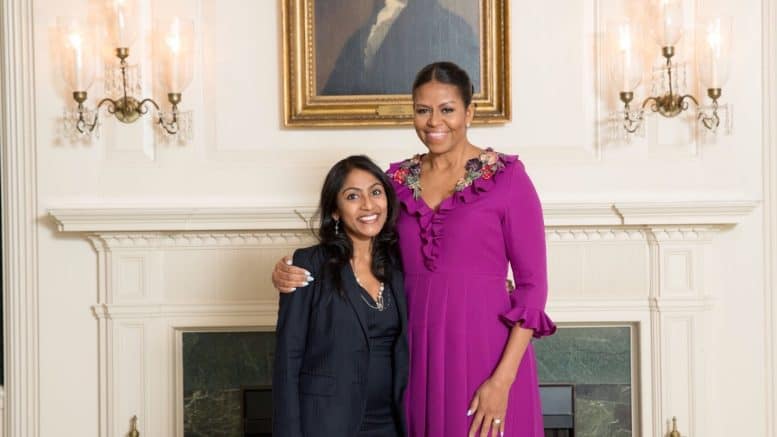 Maryland Democrats have long touted their inclusivity, the welcoming party truly representative of the populace – women, men, African Americans, Latinos, LGBTQ, workers, teachers, firefighters, the middle class, senior citizens, etc. But while the Democrats in Maryland market their party on the strength of its diversity, a growing sentiment is festering among Democratic party activists that what is preached is not always practiced.

The line to take on Republican Larry Hogan, the country’s second-most popular governor, could stretch around the block of Baltimore City’s Inner Harbor and into Little Italy. Democrats clearly have a qualified bench of candidates who are ready and willing to give Hogan his biggest political fight to date.

Nevertheless, who is missing from that long line of Maryland Democratic gubernatorial candidates?

Mostly women – but not for long.

On Saturday, 37-year-old Krishanti Vignarajah, the former Policy Director to First Lady Michelle Obama, stood before a gathering of women (and a few men) while attending the United Democratic Women of Maryland’s quarterly luncheon at Nick’s Airport Inn in Hagerstown, Md. to announce she is mulling a Democratic bid for governor of Maryland and will make her political intentions known sometime in September.

After Vignarajah’s introduction and brief announcement, I confirmed with her that she is indeed weighing her options to run for governor and will make an announcement in September. Vignarajah conceded that she is new to elected politics in Maryland and has been working on national policy issues.

Vignarajah served as the keynote speaker in April at the annual Western Maryland Democratic Summit. In May, Vignarajah gave the commencement speech at Hood College in Frederick. Some of her recent tweets have been critical of Gov. Hogan and President Donald Trump.

According to Vignarajah’s online bio, while working for the Obama White House, she “led the Let Girls Learn initiative, which brings together a number of government agencies to address the range of challenges preventing adolescent girls from attaining a quality education.”

Before working for Mrs. Obama in the White House, Vignarajah served as senior advisor at the State Department under former Secretaries of State Hillary Clinton and John Kerry.

Vignarajah graduated from Yale College, where she earned a master’s degree in political science and a B.S. in molecular biology, then studied as a Marshall Scholar at Oxford University, before returning to Yale Law School.

Last week, Maya Rockeymoore, the spouse of U.S. Rep. Elijah E. Cummings (D-Md.), announced that she, too, is weighing a bid for governor of Maryland.

For more information of Maryland’s gubernatorial primary, please continue to follow AMinerDetail.com for the latest news.