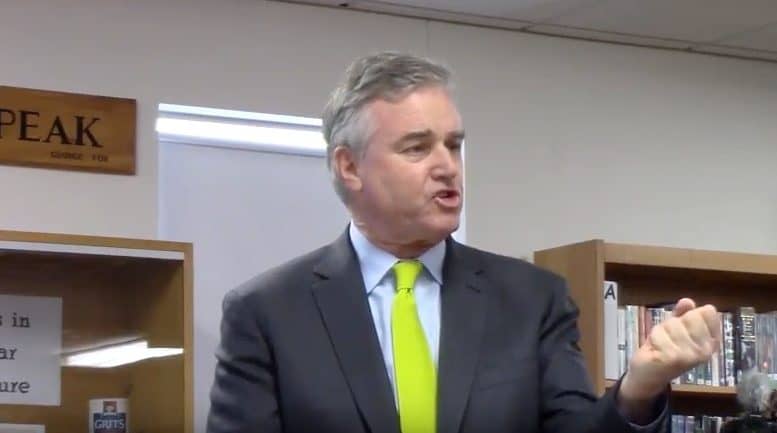 Rep. David Trone (D-Md.) may not be the progressive media darling of the congressional freshman class like Rep. Alexandra Ocasio-Cortez (D-Bronx, Queens) or Rep. Rashida Tlaib (D-MI), but that is not to say that Trone is sitting on the sidelines.

The bill, which has more than 190 co-sponsors (all Democrats), would also phase out the lower minimum wage for tipped workers — such as restaurant servers and valets — which has been $2.13 an hour since 1996, according to Vox.

H.R. 582 is sponsored by Rep. Bobby Scott (D-VA) and was introduced on Jan. 16 into the House Committee on Education Labor, of which Trone is a member.

On Feb. 7 Trone wrote on Facebook: “I am proud to be a co-sponsor of the Raise the Wage Act, which would raise the minimum wage to $15 an hour by 2024. It makes sense for business, and it’s the right thing to do.”

Trone and his brother Robert co-founded Total Wine & More nearly 30 years ago. The company, headquartered in North Bethesda, is now the largest U.S. independent retailer of wine. Trone served as the company’s president until Dec. 2016.

The average wage of a non-salaried Total Wine & More employee not in management is approximately $12.00 an hour, according to the website Indeed.com, a worldwide employment-related search engine.

Indeed lists a Total Wine cashier earning on average $11.69 per hour as of Feb. 26 this year, and a retail sales associate earning $13.00 per hour. A merchandiser makes approximately $12.42 an hour whereas a customer service associate makes $11.89 per hour.

Total Wine’s Indeed page lists that it collects salary information from “283 data points directly from employers, users, and past and present job advertisements in the past 36 months.”

Indeed does list a disclaimer that “all salary figures are approximations based upon third-party submissions.”

Trone’s website touts that he knows from his business experience that “higher wages pay off in the long run by reducing turnover rates and training costs by making employees more productive.”

Last Friday, Maryland’s House of Delegates approved a bill that would incrementally increase the state’s minimum wage to $15 an hour by 2025.

A Facebook post on Trone’s public page yesterday expressed gratitude to the Maryland State and District of Columbia AFL-CIO for letting him “stop by to chat with the group” yesterday.

“As a Member of the Education and Labor Committee, I will vote this week to pass the Raise the Wage Act, which would raise the minimum wage to $15 an hour by 2024. It’s time we stand up for the American worker and #FightforFifteen,” Trone’s post read.

Trone, who lives in Potomac, just outside the boundaries of the 6th Congressional District, set a record last year as the biggest self-funder in congressional history, spending nearly $30 million over the course of two years on two congressional campaigns in two separate congressional districts.

Now that Frick is out in CD-6, who stands to benefit?