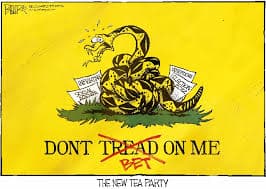 James “Jim” Coyle is a Washington County resident who is listed as the current secretary of the Hagerstown Tea Party on the HTP’s website. 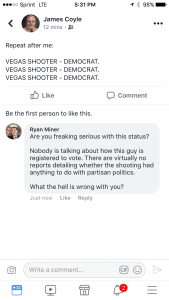 Characterize Coyle however you wish, but his recent Facebook update – a disgusting deviation from virtually all conventional political norms – is an indicative sign of the toxicity infesting our political culture – a culture where Republicans view Democrats as enemies and traitors.

Jim Coyle probably isn’t aware that he pushed out fake news on his social media page yesterday. His eagerness to point out the shooter’s registered political status was quickly dispelled by enemies of the modern-day Tea Party – facts.

On 4chan, the anonymous message board and a favorite platform of the “alt-right”, some noted that Danley was a registered Democrat. Soon after, Gateway Pundit, a conspiracy-laden blog that earned White House credentials under Trump, published an evidence-free story headlined, “Las Vegas Shooter Reportedly a Democrat Who Liked Rachel Maddow, MoveOn.org and Associated with Anti-Trump Army”. The piece was based on a review of Facebook “likes”.

Despite the fact that the claims were unproven and coming from non-credible sources, Facebook’s “Safety Check” page, which is supposed to help people connect with loved ones during the crisis, ended up briefly promoting a story that said the shooter had “Trump-hating” views, along with links to a number of other hoaxes and scams, according to screenshots. At the same time, Google users who searched Geary Danley’s name were at one point directed to the 4chan threadfilled with false claims.

Mr. Coyle – Your warped and perverted so-called ideology doesn’t even remotely resemble the roots of conservatism. You’re peddling crazy. Nothing more. Nothing less.

The roots of the actual Tea Party began to grow when CNBC’s Rick Santelli ranted on the floor on the Chicago Mercantile Exchange in July 2009. Santelli’s famous rant began when he bellowed out before the traders on the floor – correctly, I should state –  that “government is promoting bad behavior” when referring to the Obama 2009 stimulus package.

Santelli turned from the camera and posed the following question to the traders on the floor:

“How many of you people want to pay for your neighbor’s mortgage that has an extra bathroom and can’t pay their bills?” Santelli then turned back to the camera – on live television, mind you – asking President Obama if he was listening!

Santelli followed up, “We’re thinking of having a Chicago Tea Party in July! All you capitalists who want to show up to Lake Michigan, I’m going to start organizing.”

Rick Santelli’s original rant was rooted in his economic frustrations aimed at government’s vast overreach, shared by millions of Americans, including passionate Ron Paul’ites like myself.

People like me, well, we believe in free markets; we believe in limited government; we support free trade; we are anguished when our government treads on our individual liberties and shreds our Bill of Rights. We won’t stand for racism. We hate and deplore the very thought of white supremacist groups rallying in the streets, but we will defend the rights of those groups to assemble  – groups we fundamentally despise – because even they, too, are constitutionally protected.

The real Tea Party lies within the liberty movement.

It is our mission to stop the endless wars in the Middle East. We are done with bloated Pentagon budgets. We have grown exhausted with continuing resolutions. We want a balanced budget amendment passed. We support a complete overhaul of our criminal justice system. We are tired of unarmed African-American men being shot by police without just cause. And we believe that our 2nd Amendment is rooted within our imperfect society – the right to bear arms. Those rights shall.not.be.infringed. Period.

While we believe that border security is fundamental to our free society, we welcome with open arms our immigrant friends and neighbors who only wish to share in the American Dream. We will not tolerate discrimination in any form. And we do not forget that our nation was founded as a constitutional republic – that is, if we can keep it.

We believe that women should be in control of their bodies. We want government the hell out of the marriage business entirely – but we fundamentally believe that government cannot discriminate against gay couples who wish to be married! Most of all, we don’t give a flying shit what two consenting adults do behind closed doors and inside of their bedrooms.

Most of all, libertarians like myself look for common ground where we can find it – with Democrats, Republicans, Independents, liberals, progressives, and conservatives. What good is it to demonize those with opposing political viewpoints when common ground and comprise invariably can – and must – be reached in a functioning, stable society? I don’t care who I work with to meet my specific policy goals; I’m willing to work with anybody who, like me, endeavors a freer and fairer America.

I do not have the right combination of words to adequately express my profound grief for the victims and their families. My heart aches. I just don’t have the words.

Where are we as a country? As a society, where are we now that mass shootings have become almost commonplace? Tragedy strikes. We’re numb. We accept it and then move on. Repeat cycle.

Yet some people in our society are seemingly more focused on a shooter’s political affiliation rather than the grotesque loss of life? Are we just so consumed with who we voted for in the last election or political parties? How can political parties define people? That very notion is troubling to me.

We have got to be better than the James Coyles of the world. We have to.

I’ll ask the same question: Where are we as a society?

We have got to be better.

Be the first to comment on "The politics of crazy"