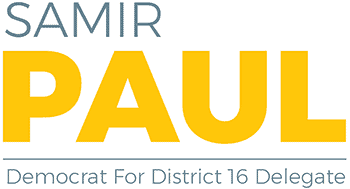 “I’m in this race to ensure my students have the same opportunities I did growing up in this community,” said Samir Paul, candidate for the District 16 delegate seat. “In one generation my parents immigrated to the United States, earned advanced degrees, built a business, served their country, and sent their two children to Harvard and Yale. Montgomery County’s excellent public schools and public institutions made my story possible, and we have to fight to ensure the next generation can share that experience.”

“My friends, family, and neighbors in the county have always believed that if you work hard, your kids will have a better life than you, because this is America. This election is about what kind of community we want to build. My students deserve to grow up in a world where their gender, race, bank account, or social status will not determine their destiny, and I’m going to work hard to make that a reality.”

On a new website launched today, www.samirpaul.com, Paul outlines a common-sense vision for change inspired by his career as a problem solver, organizer, and teacher. In the coming months, Samir will communicate with voters across District 16, going door-to-door to share his experiences growing up in the area and listen to his  neighbors.

On Sunday, October 29, Paul will host a launch event to kick off his candidacy. The event will take place from 3:00-5:00 p.m. at The Barking Dog, a small business that has served downtown Bethesda for almost two decades.

Paul attended Wayside Elementary School and Hoover Middle School in Potomac, and he graduated from Montgomery Blair in 2006. He went on to graduate from Harvard University in 2010 with a degree in computer science. After college, Paul returned home, serving as a math and computer science teacher at Bell Multicultural High School in Washington, D.C. and earning his graduate teaching degree from American University. Just one year out of college, he led the development of the only AP Computer Science class in D.C. Public Schools. During the 2012 Presidential campaign, Samir left Maryland to serve as an organizer in the politically important state of Wisconsin, organizing and mobilizing local volunteer groups to get out the vote as part of President Obama’s nearly seven percent victory in the state. After the campaign, Paul worked with IBM using his computer science background to improve U.S. Postal Service packages’ on-time delivery. He returned to teach at Montgomery Blair High School in 2015. He was recently named 2016 “Rising Star Teacher of the Year” by the Marian Greenblatt Education Fund and was identified by the National Education Association on its “30 Under 30” list in 2017.

“It’s hard to overstate how much my family and I gained from this community’s commitment to public schools and public resources,” Paul said. With the coming conclusion of Maryland’s Kirwan Commission, the need is urgent: “Over the next few years, the General Assembly is going to fundamentally reshape the way we fund and structure public schools. I want to be the teacher in the room when those conversations are happening,” Paul said. “We have to double down on public institutions that turn around and invest right back in people.”