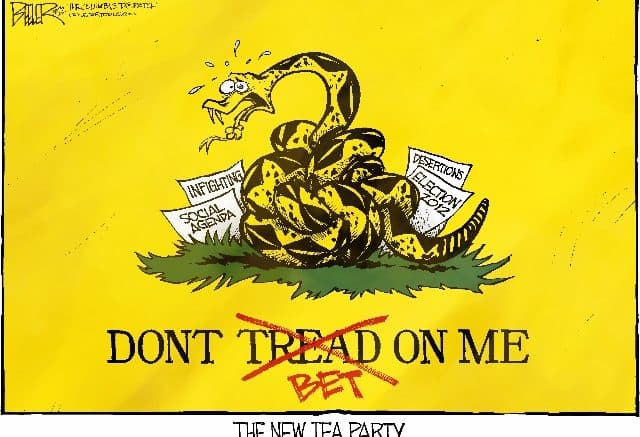 Last week, Neil Parrott announced that his Washington County’s state delegation decided to appoint former school board president Tom Berry to the six-member search panel that will be tasked with filling the seat that was left vacant after Karen Harshman was removed by the Maryland State Board of Education.

Of all the qualified people Parrott and Wivell could have chosen, they quickly settled on an embittered, angry, far-right extremist Tea Party Republican whose questionable political activities and intractable ideological extremism have left members of the Washington County community scratching their heads.

The reaction to Berry, a southern Washington County resident, was swift. Former school board president Ed Forrest posted a Herald-Mail Media link to his personal Facebook page (the post has since been removed) that was heavily critical of Berry’s appointment, calling the Parrott and Wivell’s appointment of Berry “horrible.”

David Hanlin, who recently relocated to Maryland’s Eastern Shore, was formally active in Washington County’s education and Rotary community wrote the following under Forrest’s Facebook post on Berry’s appointment to the committee: 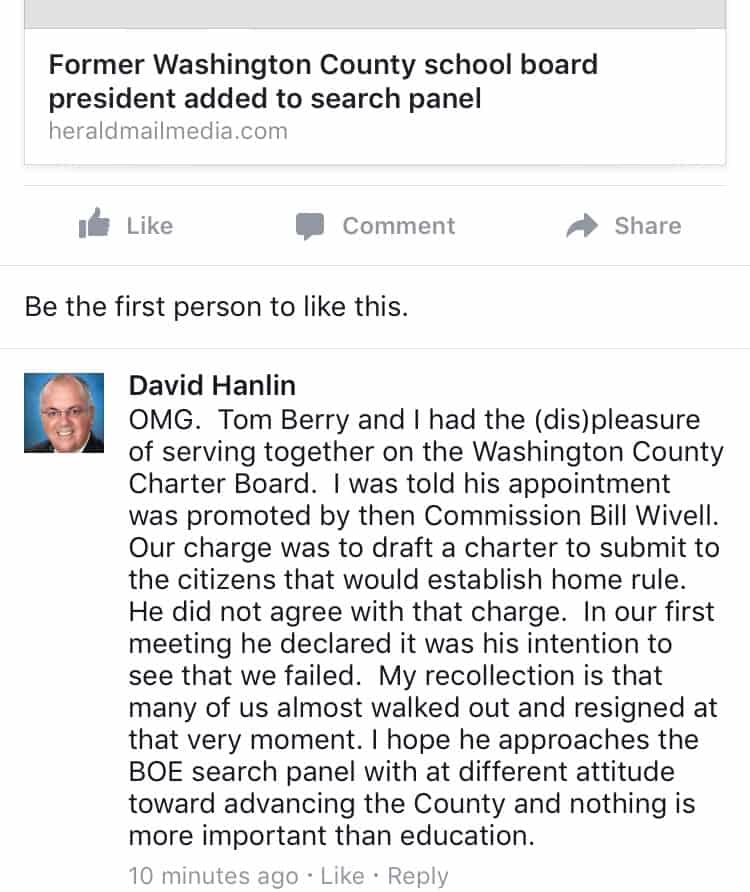 Another influential Washington County community member who asked to remain anonymous said this of Tom Berry,

“I haven’t even heard his name for quite a while. He’s very conservative, a friend of Bill Wivell. He’s well-meaning but many times didn’t have his facts straight. He will definitely try to swing things to the ultra-conservative.”

Another community member wrote to me about Berry,

He claims to hold a handful of patents. He claims to have been an engineer…aeronautical, I think is what he said. Given this, I find it surprising that he is as close minded as he is. Wivell loves him….no open-mindedness, no new ideas, never wrong, Super conservative, thinks he knows best…on everything.

Tom Berry is a frequent contributor to the Herald-Mail Media’s “Feedback” section.

Read below some of his latest comments:

“I’m glad Tim Rowland is almost recovered from his head exploding on election night. What a remarkable recovery, within a month he seems almost back to normal with his Sunday column bashing Trump. I say almost because his Sunday column ‘Country can’t survive a liar in chief’ indicates a slight loss of memory. Tim, you’re wrong. We just survived eight years of a liar in chief. Try to recall ‘if, you like your doctor, you can keep your doctor. And you can also save $2,500 a year in health care costs.’ Think hard and remember our ambassador murdered in Benghazi was caused by a video. But, hey, at this point what difference does it make? It doesn’t matter.”
— Tom Berry, Rohrersville

Does calling former President Barack Obama a “liar in chief” sound like someone who should be appointed to a Board of Education search panel?

“The street sign for the hospital is a letter H on a white rectangular background. The logo for the Democrat presidential candidate Hillary Clinton is also a letter H, except that the horizontal bar has been replaced by an arrow. Symbolically, it appears that she is headed for the hospital. In light of all the controversy over her health, her campaign may want to rethink her logo. After Googling ‘Hillary seizure,’ on the internet, a troubling video at best, they may also want to reconsider even more about the candidate.”
— Tom Berry, Rohrersville

Does Tom Berry appear to be someone who should have been appointed to a Board of Education candidate search panel?

Without any evidence or proof whatsoever, Mr. Berry took to the Feedback section again on August 9, 2016, inferring that a Clinton supporter  – A Democrat – tore down his Trump sign that was planted in his yard.

About the story about the absence of campaign signs:

“A comment on the front page of Sunday’s paper noting the absence of campaign signs: Last week, my Trump sign was torn down and thrown in the brush. After straightening it, I put it back up. Two days later, it was gone. Now the question is, why would anyone vote for a political party of vandals and thieves? Could it be because — starting at the top — the party’s candidate is corrupt and untrustworthy?”
— Tom Berry, Rohrersville

Doesn’t this type of behavior remind you of somebody else we know with a bad Twitter habit – somebody who spends most of his free time sitting in front of his television commenting on early morning Fox and Friends snippets?

“I don’t recommend anyone try this, because it could be hazardous to your well-being, but just suppose a person would throw an ISIS banner, a gay rainbow flag, a Confederate battle flag, and the stars and stripes on the ground, defecate on them, douse them with lighter fluid and ignite them. Now consider the following questions: The desecration of which flag would bring the most grief to the crazy arsonist? Which burning flag would cause the least protest? And the third question is, do your answers to the previous two questions trouble you, at least a little bit?”

Irony cannot be lost on this. Being the hardcore Trump supporter that Mr. Berry is, the following Feedback he wrote on February 5, 2015 has to be my absolute favorite, you know given the circumstances of his hero Trump’s 2016 election:

Or, how about this little diddy Mr. Berry wrote on January 29, 2015 in which he denies that climate change is real.

Make up your mind, then speak up on global warming

Dozens of climate change models have been funded by the United Nations, the U.S. government, universities, tax-exempt organizations and others. Results of these models disagree. If they agreed, there would not be so many. They all have one thing in common, however; all show that the planet is warming (otherwise they would not be funded).

Arbitrarily compare 10 models, and simple logic would tell you that if all produce different results, at least nine of them were wrong. Quite possibly, all 10 could be wrong. How can this be resolved? The answer is that it does not matter. The propaganda campaign says that 100 percent of all models show the planet is warming.

Other propaganda is to solicit celebrities, politicians and others to declare that climate change is real. The president in his State of the Union address declared that the planet is warming. The latest coup is to get Pope Francis on board. These people have no technical training or background in neither the physics of the atmosphere nor the construction of these models. They can only repeat what they’ve been told. Politicians are the most amusing. In the last week, the United States Senate decided to vote on whether the planet is warming. Now that’s sad.

Also, the campaign will denigrate, demonize and, if possible, destroy any critics. Usually, it calls the opposition deniers (as in Holocaust denier), as we have seen in a recent letter to the editor.

So what are you going to do? There are tons of articles describing this problem and the financial impact of the global warming hoax on our country. Find them, read them, make up your mind, then speak up. Together, we can make a difference.

Here’s another Berry comment to Feedback in which he gripes again about climate change:

“It baffles me how intelligent, knowledgeable writers like Hans K. Buhrer of Smithsburg, can seem to be so gullible when it comes to the hollow rhetoric of climate change proponents.”

Of course, debating climate change is a worthy topic for debate in a political context, but flatly denying its existence or denigrating the science that actually proves that climate change is not only real but a looming threat to our country is bordering the insane for someone who is expected to appoint a board of education member. But this is what you should expect when two Tea Party extremists like Neil Parrott and Bill Wivell are afforded the opportunity to influence the local education process.

Harshman attorney intends to subpoena journalists for her public hearing