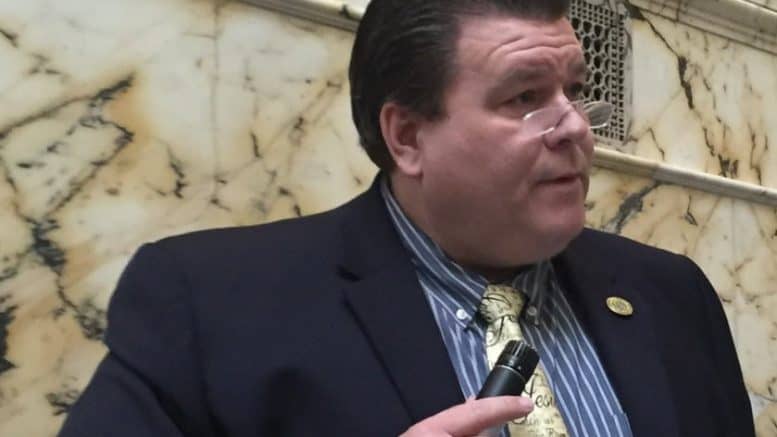 The poll results, which were shared with A Miner Detail on Friday, show McKay, a former Allegany County Commissioner who was first elected to the Maryland House of Delegates in 2014, dominating the three-person Republican primary.

District 1C is geographically widespread, covering both Washington and Allegany Countie, stretching from the Town of Williamsport to Cumberland’s south side.

254 District 1C Republicans were contacted in the last 72 hours who said that they intend to vote in Maryland’s June 26 primary. Respondents who agreed to participate in the poll were prompted with the following question:

“As you may know, Republican Delegate Mike McKay is running for re-election to the House of Delegates. If the primary election were held today, for whom would you vote?  Mike McKay, Nicole Alt-Myers, or Jordan Lysczek?”

McKay received 89.52% support, whereas Alt-Myers and Lysczek are virtually tied at 5.65% and 4.84%, respectively. Undecided voters were not polled.

When District 1C voters were informed that Republican Gov. Larry Hogan endorsed McKay in his re-election bid, Alt-Myers lost ~54% of her initial support, while Lysczek retained her support at ~ 66%.

President Donald J. Trump’s net approval rating in the District is 87%, according to the poll results.

When reached for comment, A Maryland Republican strategist told A Miner Detail on background that “Myers would have to spend upwards of $100,000 to even make this a primary race.”

“She’s not going to raise that from donors, and I don’t know many candidates who are willing to spend that much of their own money – or their spouse’s money – when it’s clear they’ll lose anyway,” the strategist told A Miner Detail.

Another Western Maryland Republican strategist commented on background about the poll results when reached by A Miner Detail on Saturday, saying:

Nicole has spent $28K ($17K of it Leroy’s money), and she’s virtually tied with Jordan. She’s paid who knows how much for billboards; she’s ran radio ads; and she’s tried to craft what at least seems like a campaign, but it’s gotten her nothing.

It would take Leroy spending a whole hell of a lot more of his own money (because he’s alienated most of the big donors in Western MD), and Nicole still wouldn’t stand a chance. That will be a big enough headache in and of itself, not to mention if his own situation gets worse between now and June.

Sprecher resigned from her county position last year and has since filed a civil suit against Myers in Washington County Circuit Court.

“Nicole Alt-Myers is anchored with her husband’s baggage, and the worst of LeRoy’s antics have not even come out yet; but it’s clear from polling that voters are familiar with his behavior and won’t reward him by electing his wife, who has found a turtle shell to duck her head into and take cover,” the same Republican strategist continued.

“If I were Nicole Myers, I would seriously consider getting out of this race by Tuesday’s deadline. It would be an expensive mistake not to.”

Myers was among the five Republican men elected to the commissioner board in the November 2014 election.

McKay toppled Givens in the June 2014 Republican primary, earning the majority of his support from Allegany County while Givens bested McKay among Republican voters in Washington County.

Myers and Givens had been at political odds in 2014; Givens claimed at the time that Myers personally promised to support him in a race to succeed Myers in his delegate seat. Myers denies that he offered Givens his support. Givens and Myers are now said to have made amends, with Givens lending his support to Alt-Myers in her District 1C bid to oust McKay.