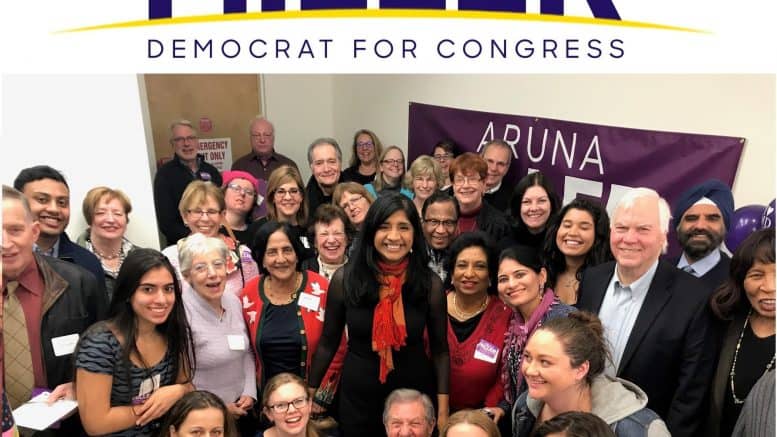 Miller’s campaign issued a press release on New Year’s Eve that detailed the event and highlighted her congressional campaign theme.

Fellow State Delegates Kathleen Dumais and Kumar Barve from Montgomery County joined Aruna Miller and her supporters in this public event for her Congressional bid. Miller expects to file her official candidacy papers in the new year. She has been raising campaign contributions since May of this year after incumbent Rep. John Delaney indicated that he might not seek reelection. As of the last campaign finance reporting period ending September 30, 2017, Miller led the crowded Democratic 6th district field in the number of campaign contributions and the number of contributors. Her contributions totaled $560,000 at that time. (The next campaign finance filing deadline is January 31, 2018.)

At the event, Miller spoke to an engaged and energetic crowd about the issues central to her campaign: public education with an emphasis on STEM, health care, climate change, and immigration reform with an emphasis on protecting the dreamers in the DACA program from deportation by President Donald Trump. Miller also described her immigrant background, her path to becoming an engineer, raising her family in Montgomery County, her political awakening in the 2000 election when the Supreme Court decided the Presidential election, and her seven years of service in the Maryland House of Delegates.

Aruna Miller began her career as civil engineer, working for 25 years for Montgomery County. In 2010, she was elected to the Maryland Legislature where she represents the 15th District and serves on the Appropriations Committee. Delegate Miller lives in the 6th Congressional District with her husband, David, and their two dogs Lucy and Scout. Aruna and David also have three adult daughters Meena, Chloe, and Sasha.

Miller, who lives in Darnestown, is giving up a safe seat in the House of Delegates to succeed Rep. John Delaney (D), who is leaving Congress at the end of his term to run for president. Miller has significant backing among the Democratic Party’s establishment wing as well as several Democratic activists.

The CD-6 Democratic primary field is shaping up to be one of Maryland’s marquee political races to watch in 2018. Wealthy businessman David Trone, who placed second in the crowded 2016 District 8 primary, is running an aggressive districtwide campaign, setting up office space in all five of the district’s counties. Trone, however, does not live within the geographical borders of the district, but neither does John Delaney.

The rumor on the street is that Miller’s campaign conducted an internal poll last year that places her and Trone virtually tied or within a few points of one another. The same poll apparently showed that Trone has name recognition but is also viewed as deeply unpopular.

State Sen. Roger Manno is undeniably running one of the strongest grassroots campaigns, shoring up labor support and spending significant time west of Frederick County. Manno’s campaign is focused on working-class, blue-collar Democrats, with a central theme being healthcare and economic issues. Manno, while perhaps not as visible as Trone or Miller, is truing up support among several Democratic groups in Western Maryland. Manno does not live in the district.

Conventional wisdom places Manno, Miller and Trone (in no particular order) in a three-way competition.

Andrew Duck of Brunswick, Md., an Iraq War veteran, is hoping his name recognition will boost his chances this year. Duck lives in the district and has won the Democratic nomination twice when CD-6 was safely in Republican hands.

Physician Nadia Hashimi of Potomac, Md. is a first-time political candidate who was inspired to run for public office after Donald Trump was elected president. Hashimi has dropped significant campaign cash into her race and has released a few creative videos on social media.

Hoeber, a defense consultant and former Reagan administration official, has high name recognition from her last campaign. However, a deeply unpopular Republican president may ultimately hamper Hoeber’s chances, especially in deeply blue Montgomery County. Hoeber does not live within the district’s boundaries.