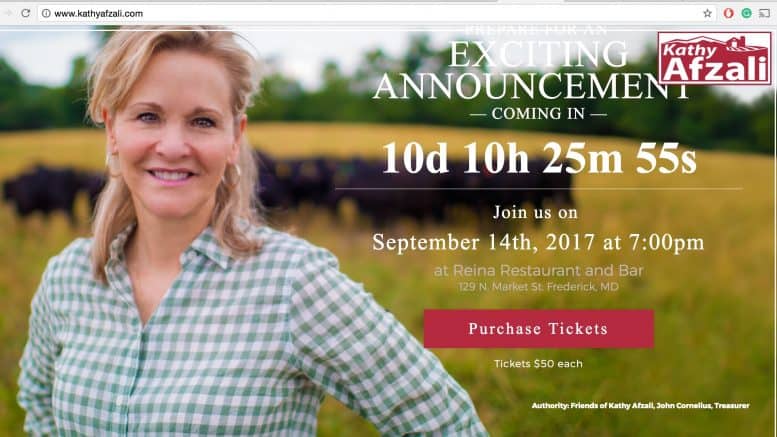 Kathy Afzali is running for Frederick County executive and will make her announcement public on September 14 at Reina Restaurant and Bar in downtown Frederick. Be sure to arrive by 7:00 p.m.

I apologize in advance for ruining the worst-kept secret in Maryland politics.

Afzali, though, isn’t following the guidebook to conventional campaign kickoffs. She’s charging $50.00 to anybody who wants to show up to watch her announce her bid for county executive.

Local candidates typically refrain from charging admission for their campaign kickoff events. Candidates and their campaigns invite as many family members, friends, and supporters as possible, packing them into a medium-sized venue, complete with bottled water, coffee, finger foods and cookies. Members of the press are invited, and the candidate announces their run for whatever political office they are seeking with a quick speech and an enumeration of what they hope to accomplish when elected.

It’s during the candidate’s speech, usually toward the end, when they make the hard ask for a donation. Staffers unintrusively peruse the room with printed donation cards, collecting checks for engaged supporters. Of course, candidates host a series of formal and informal fundraising events, living room meet-and-greets, backyard BBQ’s, etc. after their formal kickoff announcement.

But charging $50.00 bucks in advance for a campaign kickoff appears, at least on the surface, to be a bit much. Most Frederick citizens I know aren’t willing to shell out $50.00 to watch Kathy Afzali announce she’s entering a Republican primary at a swank downtown restaurant.

When reached for comment, County Councilman Kirby Delauter told A Miner Detail that his campaign did not charge an entry fee for his May 12 county executive campaign kickoff. Delauter’s campaign kickoff was well-attended, with three hundred or more people showing up in support.

Be sure you get your tickets today!