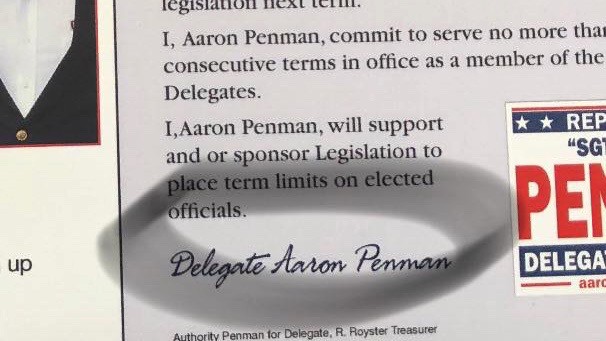 If Aaron Penman’s strategy is to win (or, perhaps, lose) a seat in the Maryland House of Delegates by self-inflicted controversy, he’s well on his way to victory.

The District 7 Republican made no apologies for hosting a “gun bingo” that raffled off an AR-15 gun, a semi-automatic rifle, three days after a Marjory Stoneman Douglas student murdered 17 people at his high school – 14 students and three staff members – on Valentines Day this year.

Penman, who is a deputy sheriff in Harford County, told the Baltimore Sun in an email that canceling his gun event would be an infringement on his Second Amendment rights, adding that the focus of the deadly shooting should be “mental health” and “security in schools.” Despite social media criticism, Penmen held his gun-themed fundraiser as planned.

Now, a group of District 7 voters is saying that Penman’s latest campaign mailer is deliberately misleading.

Penman’s literature in question, a two-sided campaign mailer that was mailed to thousands of Republican District 7 voters, includes a “Term Limits Pledge,” in which Penman commits to serving “no more than two complete consecutive terms in office as a member of the House of Delegates” as well as Penman pledging to support or sponsor term limits for elected officials.

Beneath Penman’s pledge, his name is digitally signed in cursive as “Delegate Aaron Penman.” There is a big problem, voters say: Penman has yet to be elected a Maryland state delegate.

Below is a copy of Penman’s mailer in question. 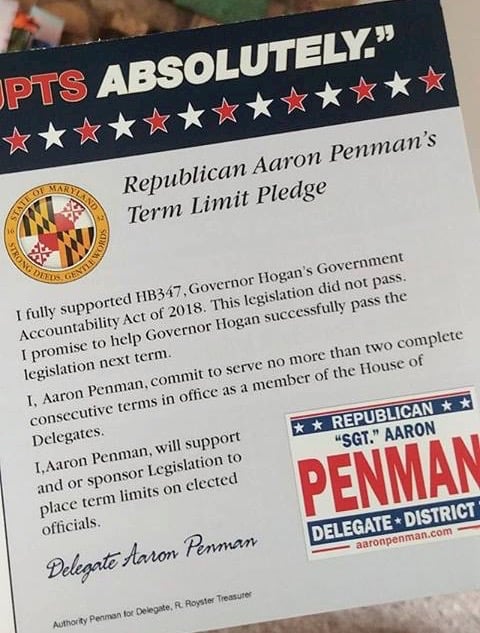 A Miner Detail reached out to Penman on Sunday via Facebook Messanger. When questioned about using “Delegate Aaron Penman” on his mailer, Penman wrote that the pledge only applies if he becomes a state delegate.

“Did you read the entire piece? It uses the wording candidate in several places. The pledge, it doesn’t, but it’s a pledge for if/when I do get elected. The pledge only applies if I become a Delegate,” Penman told A Miner Detail.

Pressed again about using the “Delegate” prefix before his name, Penman claimed that “candidate” appears in several places throughout his mailer, telling A Miner Detail,

“Are you gonna circle the places I say Candidate on the mailer……that are not a pledge, if I was elected as a Delegate.”

After A Miner Detail pressed Penman to answer the question a third time, he abruptly ended the conversation, writing,

“I think I have stated the obvious, self explanatory reasons. I’m sorry you feel the need to make issue, out of a non issue. Good luck to you Ryan.”

An ethics complaint filed with the Maryland State Board of Elections in April by a District 7 resident claims that Penman is using his sergeant rank as a full-time Harford County sheriff’s deputy for political gain. The complaint argues that Penman’s campaign literature is in violation of Public Ethics Law, Title 5, Subtitle 5: “An employee or official may not intentionally use the prestige of his or her office for personal gain of another.”

A copy of the ethics complaint filed against Penman is below. 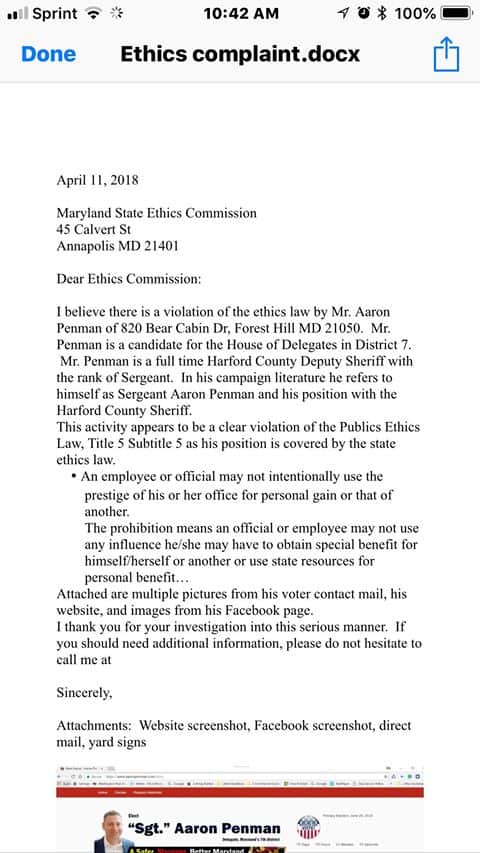 Penman is one of 13 Republicans running for three seats in District 7 of the House of Delegates. The winners of the Republican primary in June will face two Democrats and one Green Party candidate in the November general election.