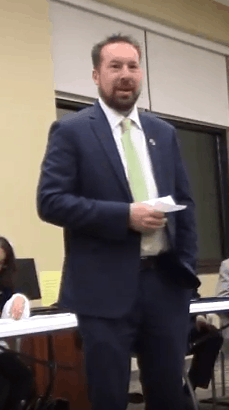 District 2B encompasses most of the City of Hagerstown.

The Republican Central Committee announced that Corderman’s name will be forwarded to Hogan, who will make the appointment official.

Corderman was one of three candidates who applied for the legislative vacancy, including Laura Spessard Herrera, a financial adviser with RBC Wealth Management and Hagerstown Tea Party President Donald “Donny” Ravas, who serves as the chief executive officer of Dell Transport courier service.

More than a dozen 2B residents – friends, neighbors and supporters of the three applicants – spoke Thursday evening before the conservative Republican Central Committee in a rented room inside the Alice Virginia and David W. Fletcher Branch of the Washington County Library, including Hagerstown Mayor Robert E. Bruchey II and former Del. Paul Muldowney, both of whom urged the Committee to appoint Corderman.

After public comments, the Committee retreated into a separate section of the library to deliberate on the three applicants. The Committee emerged about an hour later to announce that Corderman had been selected.

Corderman will soon resign his seat on the Hagerstown City Council and be sworn into the Maryland House of Delegates.

The Hagerstown City Council will be tasked with selecting a City resident to fill Corderman’s seat on the Council. It’s unclear whether Corderman will vote on his replacement.

A Miner Detail has exclusive video.

Be the first to comment on "Corderman chosen to fill Wilson’s 2B term, exclusive VIDEO"