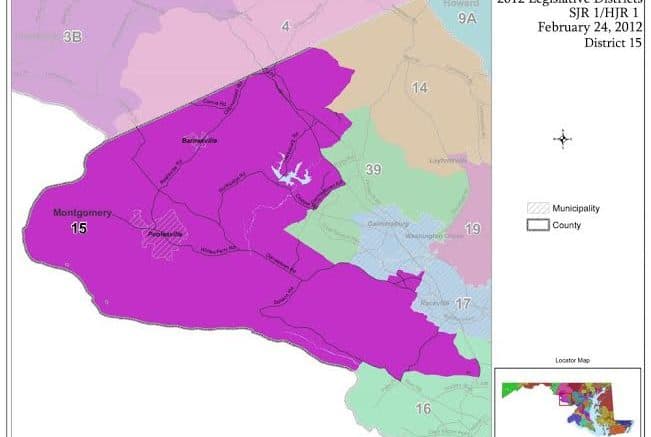 Montgomery County’s District 15 stretches from Clarksburg all the way down to Potomac and includes two townships – Poolsville and Barnesville – as well as several unincorporated areas, including Darnestown, Germantown, North Potomac and Travilah.

After Robert Garagiola resigned the District 15 Senate seat in 2013 to “spend more time with his family,” Brian Feldman, who served in the Maryland House of Delegates from 2003 to 2013, was appointed to fill Garagiola’s seat on September 11, 2013, and was subsequently sworn into Maryland’s State Senate on September 17.

Feldman confirmed with A Miner Detail that he is seeking re-election to the Senate in 2018.

District 15 is a three-member district.

Incumbent Democratic Delegates Kathleen Dumais (D) and David Fraser-Hidalgo (D) also confirmed with A Miner Detail that they will seek re-election in 2018.

Dumais was first elected to the House of Delegates in 2002 and has won re-election in 2006, 2010 and 2014. Fraser-Hidalgo, a former county police officer, was appointed in 2013 by the Montgomery County Democratic Central Committee to fill Sen. Feldman’s District 15 delegate seat. He ran for election in 2014 and won a full term, serving the district alongside fellow Democrats Dumais and Aruna Miller.

Del. Aruna Miller, who was first elected to District 15 in 2010, will not seek re-election to the House of Delegates in 2018 but is instead running for Congress in Maryland’s 6th Congressional District.

Miller running for Congress leaves open a seat in the three-member delegation. The following Democrats are running or strongly considering a bid in District 15:

A Miner Detail has confirmed with each of the above-listed candidates that they are running or are considering a run in the District 15 Democratic primary.

Feldman, Dumais and Fraser-Hidalgo have no intention of forming a slate with any particular candidate at this time.