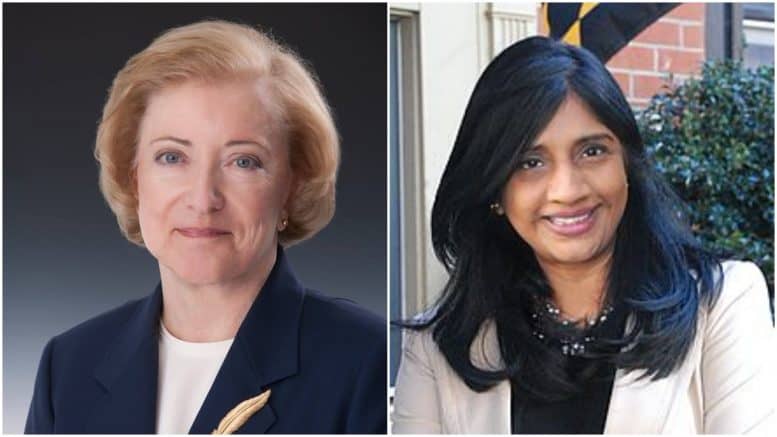 Providing that an official of State government or a local government is immune from criminal and civil liability for refusing to provide information to the federal government or another state that will be used for certain purposes; stating it is the intent of the General Assembly to maintain community trust in Maryland governmental operations and law enforcement by clarifying the parameters of State and local participation in federal immigration enforcement efforts; requiring the Attorney General to develop certain policies; etc.

Hoeber wrote that she is “appalled and outraged that Delegate Aruna Miller would support protecting criminals from further prosecution by supporting Maryland House Bill 1461, which is benignly being referring to as “The Safe Act.'”

In other words, Hoeber says, Miller supports “protecting criminals from further prosecution” and says the bill is “intended to offer shelter to those who are already in the criminal justice system – known criminals – and treating them on par with otherwise law-abiding immigrants.”

HB 1461 was previously introduced in the 2017 Session and was known as HB 1362. Nearly 50 Democratic co-sponsors have signed onto the bill this year, which was originally introduced by Del. Ana Sol Gutierrez (D-Wheaton).

On her website, Hoeber, who was the 2016 Republican nominee in Maryland’s 6th Congressional District, stated that “the bill directs the Maryland State Police to shield known criminals from being investigated for other crimes by coordinating federal law enforcement agencies.”

“We need cooperation with all levels of law enforcement. All State agencies should comply with Immigrations Custom Enforcement (ICE) the same way they would comply with any other Federal Law Enforcement Agency,” Hoeber wrote in a statement released on her website.

“Our States Attorney in our County John McCarthy said the following in 2017 “MS-13 has been implicated in up to 18 murders over the past two years in Montgomery County.” So based on this I do not believe this act will make our state safer, it will do the opposite which is why I oppose this proposed legislation.”

Aruna Miller one of three leading Democratic contenders running to replace outgoing Rep. John Delaney (D-Md.), who is running for president of the United States.

Hoeber faces minimal competition amid a weak Republican field. She is largely favored to win the Republican nomination on June 26.