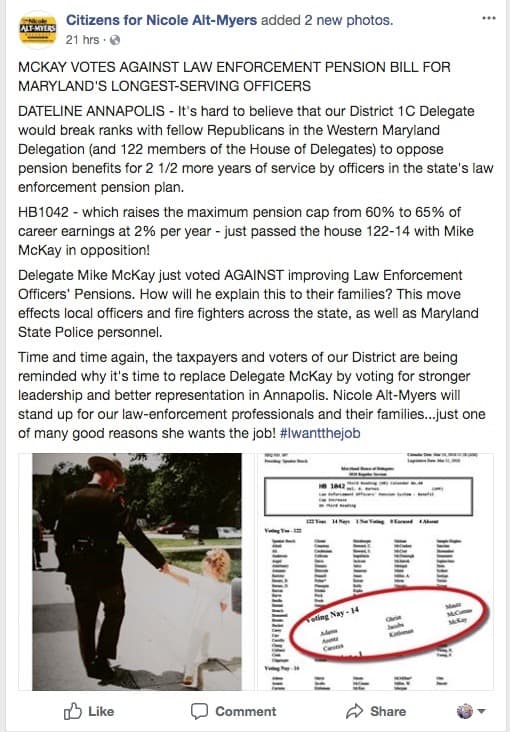 If signed by the governor, the legislation will raise the maximum pension cap from 60% to 65% of career earnings at 2% per year, according to Alt-Myers.

In her Facebook post, Alt-Myers, who is married to embattled Washington County Commissioner LeRoy E. Myers, Jr., expressed her incredulity that McKay “would break ranks with fellow Republicans in the Western Maryland Delegation (and 122 members of the House of Delegates) to oppose pension benefits for 2 1/2 more years of service by officers in the state’s law enforcement pension plan.”

McKay explains why in a statement obtained by A Miner Detail:

The bill puts the state in charge of county decisions, and that’s why I voted against it. I even offered an amendment that would have exempted counties, like Allegany County, who are doing a great job administering this program on their own. That amendment failed.

I have consistently voted against any bill that threatens local autonomy, and that’s what I did here.

I’ve been a friend of law enforcement in Annapolis, and any move to put the state in charge of local decisions would negatively affect the benefits we provide to our officers.

In her post, Alt-Myers went on to claim that “Time and time again, the taxpayers and voters of our District are being reminded why it’s time to replace Delegate McKay by voting for stronger leadership and better representation in Annapolis.”

“The bill only affects 37 officers across the state. Using Delegate McKay’s vote to protect local autonomy as a commentary on his support for law enforcement is low, dirty politics. Delegate McKay’s record is clear, and that’s why Governor Hogan has endorsed him for re-election.”

This is not the first time Alt-Myers has deleted dissenting opinion from her Facebook page.

Alt-Myers is also facing off against Hancock attorney Jordan Lysczek in the Republican primary. No Democrat filed to run in District 1C.