A Washington County teacher is under fire today over social media comments he made on Facebook.

“As I did last year, students wearing Trump or MAGA apparel are asked to leave. Let them come after me for it,” wrote Cramer in a Facebook thread. 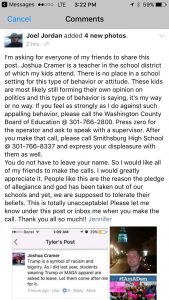 “You do not have to leave your name. So I would like all of my friends to make calls,” wrote Jordan.

Cramer’s original Facebook comments about Trump have apparently gone viral, having been shared 151 times as of 4:32 p.m. on Wednesday afternoon.

Cramer has not responded to A Miner Detail’s request for comment. 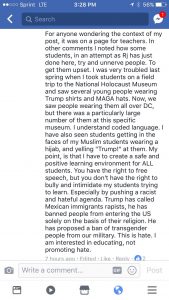 Smithsburg community up in arms over possible teacher bullying incident