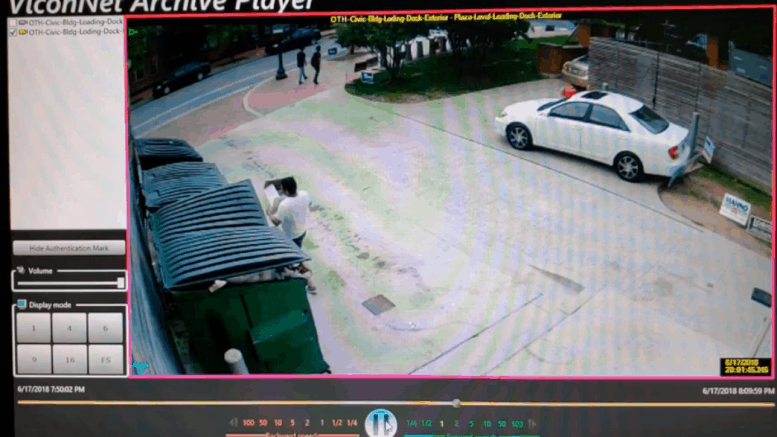 Security camera footage shared with A Miner Detail (see below) shows Unger’s campaign manager at the time removing a box of campaign materials from the storage room inside the Silver Spring Civic Building and tossing it into the outside dumpster around 8:00 p.m. on Sunday evening.

The Silver Spring Civic Building in downtown Silver Spring is one of eleven early voting sites in Montgomery County where voters can cast a ballot. Candidates have been given permission by building officials to stow away their campaign materials inside the storage room during the weeklong early voting period. Early voting in Maryland ends today.

The 3:37 security camera footage begins by showing District 20 state Sen. Will Smith, accompanied by Del. David Moon and their teammate Lorig Charkoudian, returning a table and a box of their campaign materials to the building’s storage room around 8:00 p.m. on Sunday.

Rodriguez then headed for the exit – but he stopped. The video shows Rodriguez backing up and peeking into the white box of campaign materials belonging to the District 20 team that Smith placed only moments before Rodriguez entered the room. Rodriguez is seen leaning over to check the entranceway. He looked up to the ceiling, hesitated for a moment and again checked the doorway for any incoming traffic.

Once outside, the video shows Rodriguez walking to the middle dumpster and tossing the white box of campaign materials into said dumpster. Rodriguez is then spotted looking in all directions and walking towards the street. He stopped and turned around and walked towards the civic building. The surveillance video ended with Rodriguez walking out of the camera frame.

Seventh State Blog’s Adam Pagnucco reported today that Unger fired Rodriguez after he was showed the June 17 video of his campaign manager stealing his opponents’ campaign materials and eventually discarding said materials in a nearby dumpster.

Unger has not responded to A Miner Details’ repeated requests for comment; however, Unger told Pagnucco, when reached, that he immediately fired his campaign consultant after seeing the video.

“I consider such behavior to be completely unacceptable,” Pagnucco reported Unger telling him.

The District 20 team responded to the incident when reached by A Miner Detail, writing,

“We are disappointed to be the targets of childish campaign tactics this week. After leaving early vote on Sunday night, we returned the next day to find at least $600 worth of our campaign materials missing from the Silver Spring Civic Center’s storage room. After reviewing security camera footage, we are shocked to discover Darian Unger’s staff destroyed our campaign literature, buttons and stickers. District 20 is better than this.”

The District 20 team did not indicate whether they intend to file a police report with Montgomery County Police.

Will Smith, David Moon, Lori Charkoudian and Jheanelle Wilkins are running together as a District 20 team. Charkoudian is the only non-incumbent on the team.