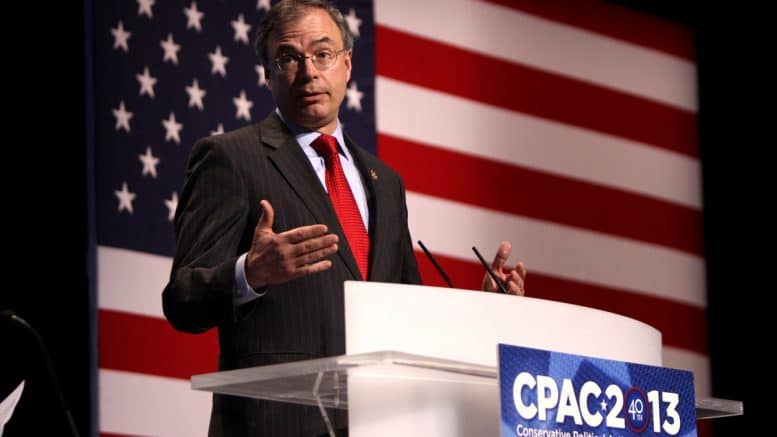 Update: As of 7/14/2017, Rep. Harris’ office refuses to acknowledge my multiple requests for comment.

Maryland Rep. Andy Harris (MD-1), a Republican, recently told WBAL-TV that he intends to introduce federal legislation that would withhold federal funding from states that refuse to turn over voter information to President Trump’s Presidential Advisory Commission on Election Integrity, which was created by a presidential executive order in May.

Maryland should share the information. Maryland took millions and millions in federal money to make sure that our elections are conduced fairly, and now are refusing to share that information. Why a state would now want to make it easy for someone to determine whether voter fraud is systematically occurring is something I just don’t understand.

Trump appointed Kansas Secretary of State Kris Kobach to serve as the commission’s vice chairman. Last week, Kobach sent a letter to all 50 states and the District of Columbia requesting voter data that will, as Kobach says, eventually be made public.

In addition, in order for the Commission to fully analyze vulnerabilities and issues related to voter registration and voting, I am requesting that you provide to the Commission the publicly available voter roll data for Maryland, including, if publicly available under the laws of your state, the full first and last names of all registrants, middle names or initials if available, addresses, dates of birth, political party (if recorded in your state), last four digits of social security number if available, voter history (elections voted in) from 2006 onward, active/inactive status, cancelled status, information regarding any felony convictions, information regarding voter registration in another state, information regarding military status, and overseas citizen information.

The White House has said it intends to keep the requested voter information on White House computers, and the information will be managed by a member of Vice President Mike Pence’s staff.

In my email to Clark, I requested that she provide Congressman Harris’ last four digits of his social security number to be published.

Requesting comment on Harris’ intent to introduce federal legislation to penalize states that fail to comply with Trump’s voter fraud Commission request, I contacted his D.C. congressional office – once on Thursday, July 6, and again yesterday, July 7.

On July 6, I spoke with a congressional intern who answered the phone. I asked the intern if I could please speak with the congressman’s communications director, telling him that I am requesting comment for a story I am working on about Rep. Harris’ intent to introduce legislation to withhold money from the states. The intern informed me that Clark was out of the office.

I then asked the congressional intern if he would be able to provide me Congressman Harris’ last four digits of his social security number. The intern immediately refused my request, laughed out loud and referred to my request as “ridiculous.”

I asked the intern why he refused my request, pointing to the Trump Administration’s request for the same personal information.

I called Harris’ office again yesterday and requested to speak with his communications director. The intern who answered the phone yesterday said Clark wasn’t in the office but that he could provide me her email.

I proceeded to ask the Harris intern if he could provide me the last four digits of Harris’ social security number. Exasperated, the intern demanded to know who was calling and sternly denied my request, saying that the congressman’s personal information is not available to the public.

The intern then politely asked if I could hold the line.

After five or so minutes of being placed on hold, Harris’ legislative director, Timothy Daniels, came on the line and asked how he could assist me.

I confirmed Daniels role with Harris’ staff and proceeded to ask him if he could provide me with the last four digits of the congressman’s social security number.

Daniels asked me if I “had actually read Kobach’s letter to the states” (I was a holding a copy of the letter in my hand while speaking with Daniels on the phone). I pointed out the paragraph in Kobach’s letter that specifically requested states provide the last four digits of voters’ social security numbers, and I asked why Daniels could not or would not provide me the last four digits of Harris’ social security number, that is if Congressman Harris is asking Maryland to turn over voter data to President Trump’s voter commission.

Daniels repeatedly said that “he is not in a position to speak on behalf of Congressman Harris” (except he did prior to making this statement) and that he could ask Congressman Harris his position – but won’t. He said I should refer all questions to Jacque Clark, the congressman’s communications director.

I asked Daniels why he wouldn’t be willing to ask his boss for the information I requested. Daniels replied, “I’m just not going to do that. I have no intention of assisting you with this request.” I asked Daniels again why he is unwilling to assist me, to which he responded, “I could speak with Jacque about your request, but I’m not talking to the congressman.”

I informed Daniels that my end goal is for the congressman’s office to issue me a statement – as brief as necessary, if they so endeavor – responding to my request for comment and answering my questions about whether the congressman will provide the last four digits of his social security number to the public.

Daniels said that he understood what it is that I was asking but that my request is unlikely to be responded to.

I told Daniels that I would continue to contact Congressman Harris’ office each day, asking for a statement.

Daniels pointedly informed me that his colleagues and other Harris staffers and interns feel “harassed” by my questions and that “I exhausted the intern’s knowledge of how to handle such a request (asking for Harris’ last four digits of his social security number) which, according to Daniels, caused them to feel “harassed.”

To date, I have had only four interactions with three Harris staffers regarding my request for comment – Jacque Clark, Timothy Daniels and a Harris intern (I do not have his name).

I asked Daniels how he would characterize our conversation.

Daniels replied, “I would characterize our conversation as “adversarial.”  I asked Daniels to expound on his characterization, to which Daniels replied, “You’re asking for information we won’t provide, and I’m not asking Congressman Harris. Anything else?”

I ended the call by thanking Daniels for speaking with me for twenty or so minutes and reiterated my desire for him to follow up with the congressman’s communications director.

I followed up with Clark again this morning but have received no response to my request for comment.

Please continue to follow AMinerDetail.com for the latest political news.

CAUTION: YOU WILL BE DUMBER AFTER WATCHING THIS!