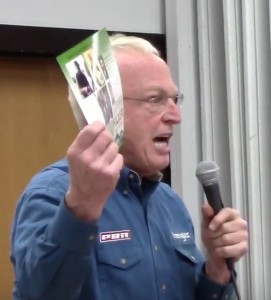 Of course, I have been unable to reach Robin Ficker to substantiate my source’s claim; he will not return my calls and messages.

Here’s what I’ve been told by insider sources with knowledge of the incident:

Robin Flicker is planning on coming to Hagerstown today with the girl to explain what charges they are filing against the Hagerstown Police Department, and that they are looking for a significant amount of cash to go away.

Ficker yesterday on social media accused Hagerstown Police officers of brutalizing a teenage girl involved in a traffic stop in which the young girl was subsequently detained, maced and arrested.

According to the Herald-Mail,

Robin Ficker, the College Park, Md.,-based attorney who represents the girl’s family, said Wednesday that he met with the 15-year-old alleged victim and her mother on Monday morning and was informed the girl was riding her bike when she was struck by a vehicle Sunday afternoon. The impact, he said, caused the girl to strike her head and lose consciousness for about 30 seconds.

“She was dazed, then she got up and realized she was OK,” Ficker said.

An ambulance was called and the girl told paramedics that she didn’t want to go to the hospital. Ficker said police arrived and pulled the girl, who is 5 feet tall and weighs about 105 pounds, off her bike when she tried to ride away.

At this point, Ficker said, a police officer lifted the girl’s hands above her head from the rear and slammed her face into a wall.

He conceded that the girl, who has a white mother and a black father, resisted when officers tried to put her in the back of a cruiser.

Be the first to comment on "Source: Ficker expected to appear in Hagerstown today to explain charges"