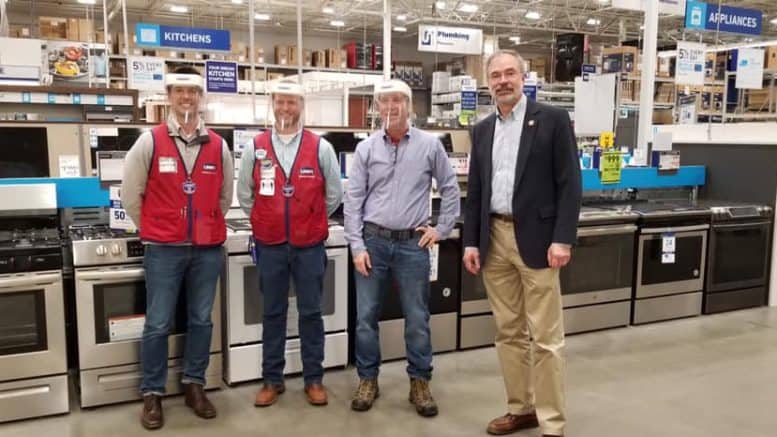 More people have now died from the coronavirus in the U.S. than anywhere else in the world, surpassing Italy, as of noon, Saturday, April 11.

Though Maryland Gov. Larry Hogan (R) and his administration proactively took aggressive action early on to stop the deadly virus’ spread in Maryland  – the governor enacted a stay-at-home order and has limited Maryland’s economic activity to essential commerce (and travel) only, among many actions – Rep. Andy Harris, Maryland’s lone congressional Republican, a medical doctor by trade, invoked his congressional immunity card Friday in a staged photo opportunity that highlighted personal defiance over public health.

The conservative Republican congressman says that he was invited to visit Lowe’s and Hardwire – and took them up on their offer.

One of three photographs published to Harris’ Friday Facebook post shows the congressman standing adjacent to three men, two of whom appear to be Lowe’s employees.

In the same photograph (above), Harris, dressed in a sports coat and khaki pants (far right), is pictured wearing none of the recommended personal protective equipment (PPE) in accordance with the guidelines set forth by the Center for Disaster Control and Prevention.

Harris is pictures standing less than six feet away from the man to his left (see the above photograph).

The CDC urges all Americans to engage in social distancing: Stay at least six feet from other people; avoid gathering in groups and stay out of crowded places and avoid mass gatherings.

The government organization also urges everyone, essential workers or not, to wear face masks and coverings in public to help slow the spread of the coronavirus.

Lowe’s website states that it has “implemented additional efforts to protect the safety and well-being” of its associates and customers, including implementing “enhanced social distancing protocols by adding dedicated social distancing ambassadors responsible for monitoring customer flow in garden centers and front-end areas and to enforce customer limits to allow proper social distancing.”

Lowe’s says that it is “making masks and gloves available to all associates in the workplace who want them.”

The home improvement store has “stopped selling N95 respirators and has donated all of its medical-grade respirators to the country’s two largest healthcare distribution organizations,” according to its website.

“So much for following Gov. Hogan’s guidelines on social distancing and staying at home. I thought you were a doctor,” wrote one Harris critic.

“Following the guidelines, stay at home so we can get through this and get the country moving again. A simple post recognizing their contribution would have been fine without your shameless photo op,” the contributor continued.

“Personally recognizing Americans who are helping fight this war on COVID-19 is important” was Harris’ cut-and-paste response to the dozens or more critical Facebook comments lamenting his decision not to wear the CDC’s recommend personal protective equipment.

In a separate photograph (below) posted to the same Facebook thread, Harris is photographed at Hardwire, LLC, wearing a plastic protective face mask.

Hardwire, LLC is Pocomoke City-based defense company that manufactures, designs and develops armor solutions for a variety of military and commercial applications, according to the company’s LinkedIn page.

Another Facebook contributor commented that Harris wasn’t wearing gloves in the photograph, suggesting Harris “touched a heck of a lot more than just the products.”

Harris responded in kind, accusing the same Facebook contributor of promulgating “fake news,” a term coined by Donald Trump to malign the press.

The congressman retorted that he “didn’t shake anyone’s hands” and agreed with another Facebook contributor that “hand sanitizer is better than gloves.”

“Gloves should be saved for healthcare personnel,” Harris wrote.

Hardwire LLC is partnering with Gerber Technology to manufacture protective face shields for first responders and medical personnel combatting the COVID-19 pandemic, according to an April 3 news release published on Hardwire’s website.

Harris says that he has volunteered his medical services when requested

“Currently the need for anesthesiologists is very low on the Eastern Shore since no elective surgeries are being performed,” Harris wrote. “Thank God our intensive care units are not filled like they are in NY.”

Harris took yet another shot at a separate Facebook critic, claiming the poster was spreading “fake news.”

“As of yesterday the peak was forecasted for April 14th and currently there are empty hospital beds throughout the Maryland Eastern Shore,” Harris wrote

Another Facebook contributor requested to understand why Harris was not equipped with PPE and why he failed to practice safe social distancing during his Friday visit to Lowe’s and Hardwire, LLC.

“Masks and gloves are not required. At Hardwire and this Lowe’s everyone is wearing a face shield – they are protected,” Harris wrote.

To date, six members of Congress have tested positive for the coronavirus.

Andy Harris’ office did not respond to a request for comment.

Andy Harris is beating the war drum with North Korea

5 Things to Know About Anthony Brennan III, the Cyclist Charged with Assault