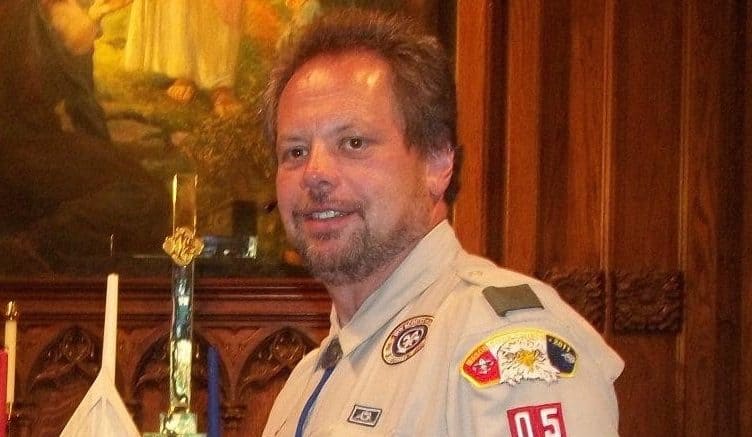 A Western Maryland man active with the Boy Scouts of America threatened to use violence against transgender people in a series of postings on a social media thread last Friday, inspiring some unnerved Facebook observers to file a complaint with his district Scout council.

A Miner Detail Editor in Chief Ryan Miner last Friday posted to his Facebook feed a Washington Examiner news article about a California Republican congressional candidate who “accused a transgender woman of invading her privacy as she live streamed herself challenging the woman in a public restroom in Los Angeles.”

Gary L. Little, 57, of Hagerstown, Md., commented on Miner’s article and threatened to “knock the shit out of a man purposely going into a ladies room.”

Some of Little’s Facebook photographs show him wearing a Boy Scout uniform and interacting with Scouts belonging to Boy Scout Troop 5, based at The Presbyterian Church of Hagerstown. Little may also be involved or associated with Boy Scout Troop 10, which is based at the Hagerstown Trinity Lutheran Church.

All Boy Scout troops and Cub Scout packs existing in Washington County fall under the jurisdiction of the Mason-Dixon Council, which is headquartered just north of Hagerstown on Crestwood Drive. 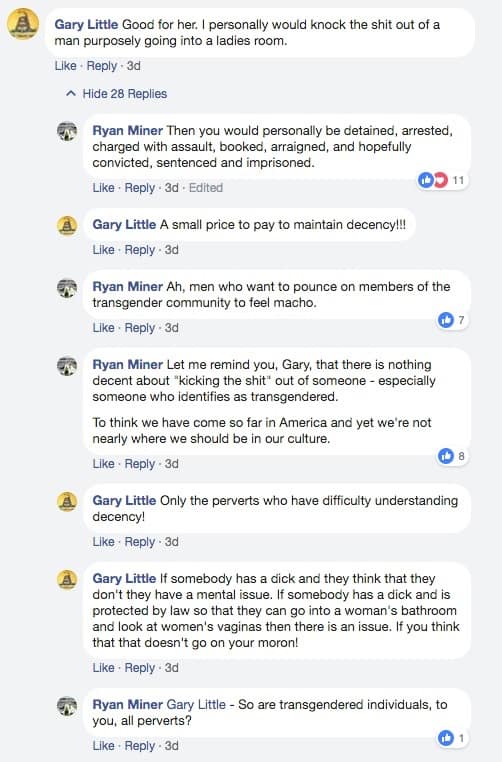 In the same thread, Little blamed “idiot laws that liberal nutjobs put into place” that allows transgender people to “gain access to places where others with DNA other than theirs congregate for nefarious purposes [sic].” Little again threatened to use physical violence against a transgender person if “he follows my daughter into a bathroom,” claiming said person is “fair game.” 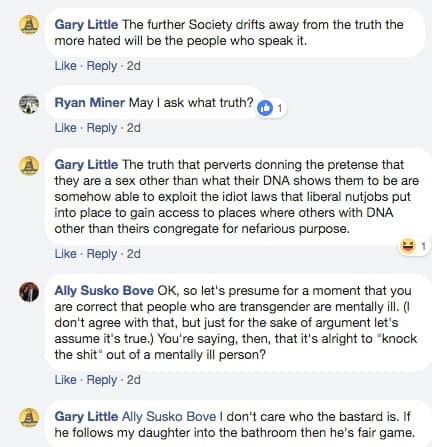 One Facebook commentator took notice of Little’s remarks and pointed out that Little is “a cub scout leader” from Hagerstown, Maryland.

“I just complained to the Mason-Dixon (yes, that is their name) Council about him,” wrote the Facebook observer. Additionally, the same commentator listed an email address for Charles “Rob” Stone, the Mason-Dixon Council’s Scout Executive/CEO, stating that she contacted Stone to complain about Little’s social media comments and encouraged other observers to follow suit.

Stone promptly responded, writing that Little’s “behavior is unacceptable and is not tolerated in the Scouting program” and said the Council is “looking into this matter so we can address it appropriately.”

Thanks for reaching out. We take these types of issues very seriously. This type of behavior is unacceptable and is not tolerated in the Scouting program. While I can confirm that this individual is not an employee of the Boy Scouts of America, we are looking into this matter so we can address it appropriately.

It is the philosophy of Scouting to welcome all eligible youth, regardless of race, ethnic background, gender or orientation, who are willing to accept Scouting’s values and meet any other requirements of membership.

A request for comment to Little has gone unanswered.