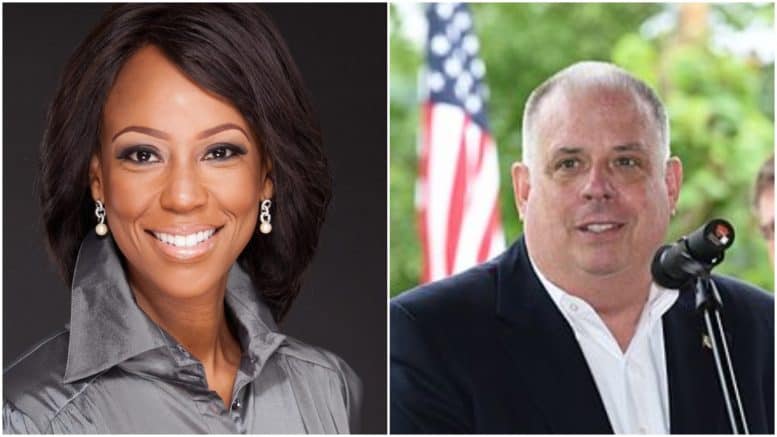 Maya Rockeymoore Cummings, Maryland’s new Democratic Party chairwoman, wasted no time settling into her role as Gov. Larry Hogan’s (R) foil, releasing a series of tweets yesterday morning critical of Hogan for apparently not doing enough to stand up for Marylanders and to President Donald J. Trump during the federal government shutdown.

A onetime candidate for governor, Cummings, 47, is calling on Gov. Hogan to “stand up & speak out” about the partial federal government shutdown, now in its 15th day.

.@GovLarryHogan says #Maryland is “open for business” when in fact the #TrumpShutown threatens to hurt or close some of our state’s federal contracting businesses, small contractors are really vulnerable. The governor needs to stand up & speak out. https://t.co/Jb6Lhnlo6k

The shutdown began at midnight E.S.T on Saturday, December 22, 2018, as a result of Congress failing to pass legislation appropriating funds for the upcoming fiscal year. Trump refuses to sign any bill that does not include at least $5 billion worth of funding for a southern border wall, a mainstay campaign platform that is popular among the president’s base.

We haven’t heard much from him since the shutdown. It would be nice to know that he’s vocally advocating for the Interests of this state, it’s workers, and businesses.

On Friday, Dec. 21, a day before the shutdown began, Hogan addressed the looming shutdown during an Annapolis press conference.

“It’s a tremendous impact on Maryland, and we’re, on a per capita basis, Maryland, I believe, is impacted more than any other state,” Hogan said.

It’s unacceptable to punish hardworking federal employees because Washington can’t get their act together – dedicated men & women should not be used as pawns. It’s time for leaders to end the dysfunction & come together to find solutions instead of shutting down the government. pic.twitter.com/CXbzbwegZD

The same day, Hogan tweeted that he joined Montana Gov. Steve Bullock, a Democrat, in calling on Congress and the Trump administration “to reach an agreement to fund the federal government to avert a partial government shutdown.”

Hogan again addressed the ongoing shutdown on Jan. 2 in a tweet, calling on both branches of government to do their jobs.

Compromise is not a dirty word. It’s way past time to put aside the political posturing and do the people’s work. #DoYourJobs https://t.co/zQvO0QLC8o

“Imposing this unnecessary hardship on federal employees is unacceptable and represents a failure of leadership. We urge you to fully consider the impact that a shutdown has on the national capital region and the country,” the joint letter stated.

Still, after several public statements by Hogan calling for an end to the government shutdown, Cummings is not assuaged.

Cummings tweeted yesterday evening that Hogan could still do more “to get his party and its leader to reopen the govt” and “getting a meeting at the White House with all of the Republican governors to demand Trump and @senmajldr reopen government by accepting the compromise Dems already offered.”

Someone asked me what more ⁦@LarryHogan⁩ could do to get his party (@GOP) & its leader (Trump) to reopen govt? How about stop paying @GOP dues, fundraising for @GOP members, & recruiting other Republicans 2 do same? #attentiongetter Other ideas?! https://t.co/kFrKasv6yj

What more could @LarryHogan do to get his party’s leader @realDonaldTrump to open the government? How about getting a meeting at the White House with all of the Republican governors to demand Trump and @senmajldr reopen government by accepting the compromise Dems already offered?

A Miner Detail requested comment from Cummings in an email sent yesterday. While Cummings did not respond to A Miner Detail’s emailed request for comment, the state Democratic leader tweeted at A Miner Detail Editor in Chief Ryan Miner yesterday evening that she “already responded.”

You need to read my tweets. I already replied.

To date, the Maryland Democratic Party, under Cummings’ leadership, has not released a single press release or social media post addressing the federal government shutdown.

Cummings was elected chairwoman of the state Democratic Party on Dec. 1, ousting incumbent Kathleen Matthews by an earnest 438-319 vote amid the party’s activists.

Based on a report released yesterday by Doug Tallman of MyMCMedia.com, the federal government shutdown affects approximately 147K federal workers who live in Maryland and could be a billion-dollar blow to the state.

Be the first to comment on "Despite Hogan’s bipartisan calls to end federal government shutdown, Md. Dem leader attacks"