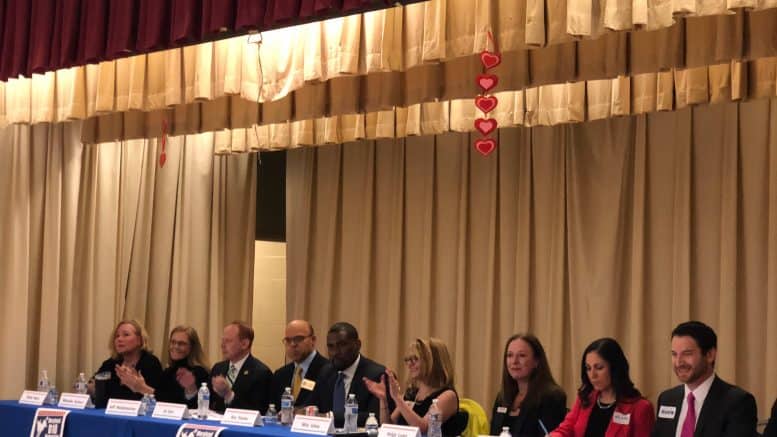 The District 18 House of Delegates race is one of the marquee political primaries being closely watched by Montgomery County political observers. Much has been written about this primary. Without any polling as a guide, though, the race has become a high-stakes guessing game about which candidates will prevail when all is said and done.

A Miner Detail offers some brief observations about the eight candidates.

Two of the district’s incumbents – Jeff Waldstreicher and Ana Sol Gutierrez – are running for new political offices, leaving Del. Al Carr of Kensington as the only incumbent seeking re-election.

Carr’s seat is considered mostly safe by objective political observers, although there is some chatter throughout the district that Carr’s Annapolis record isn’t stellar; some people believe that Carr’s legislative record is inadequate, saying he’s running for re-election based almost entirely on name recognition alone with scant accomplishment.

Milano entered the race in late December – some said, at the time, too late – like a lamb, but she’s roaring like a lion to the finish line. No longer considered the wildcard but a leading contender, the PTA mom of two is working full-time as the executive director of a public health care organization while running a full-time campaign, putting in upwards of 90 to 100 hours a week with little sleep.

Political observers in the district say Milano has been the most impressive amid the highly-educated and well-qualified candidate field, consistently demonstrating her policy chops and deep understanding of complex healthcare and education issues.

Key themes in Milano’s campaign include economic growth, bringing jobs to the district and leveraging technology to address transportation. Her plans to increase small businesses in the district while maintaining fiscal responsibility with respect to the state’s budget separates her from the candidate field. She has consistently advocated for investing in workforce development training and clean, renewable energy solutions.

Objectively, Milano has run one of the most impressive and aggressive ground games for a candidate who was a virtual unknown just six months ago.  She has several hands-on volunteers; she’s knocking thousands of doors; and you’ll find her shaking hands at Metro stops in the early mornings and late evenings – often before heading off to work. Her website, observers note, is bar-none the best and most comprehensive breakdown of issues amid her competitors.

Some political insiders dub Milano as the District 18 “consensus candidate.” Her activist record in fighting against rampant abuses at the behest of multinational corporations combined with her savvy business skills and fierce negotiation abilities makes her a stand-out candidate, a policy wonk and an intrepid mom who will stand up and fight the gun lobby and work to protect students in public schools.

Driving through District 18, one will quickly discover a sea of Milano campaign signs – a clear and convincing display of support for one of the leaders in the race.

Solomon and Shetty, like Milano, have run aggressive ground games and impressive get-out-the-vote efforts. Both are often mentioned in the same sentence as potential winners: Solomon for his progressive bona fides and Shetty for her Democratic insider connections and expertise on healthcare issues.

It’s hard to find a nicer guy in politics than Jared Solomon, and his good-guy, pro-public education, pro-union positions position him to fill one of the vacant seats.

Emily Shetty ran for a House seat in 2014 and placed fourth, coming close to winning. She was endorsed by the Washington Post and is said to be incredibly smart by most Democratic activists. Shetty has, once again, proven her ability to shine brightly in a field of highly-qualified candidates.

In the last week or so, however, some party activists have jabbed at Shetty over her job as a lobbyist, working for a notably Republican firm. Others complain that Shetty, often considered a Democratic insider, is using Democratic resources to boost her candidacy among some of the groups and organizations endorsing candidates. Shetty has been a prominent fixture in Democratic politics over the last four years, and she’s risen up the ranks in the Montgomery County Democratic Party.

Others, too, have criticized Shetty for what some say is her inability to play nice with others in the political sandbox. The tension among some of the candidates in this race is the biggest open secret south of Rockville, and some are pointing to Shetty (and others) as waging underground, negative whisper campaigns. Of course, A Miner Detail has been unable to verify any negativity from Shetty, so whatever chatter is out there about her should be approached with necessary skepticism.

Johns has built arguably the most prolific social media presence over her Democratic competitors. Unafraid, unshakable and refreshingly spunky, Johns, who lives in Chevy Chase, has earned the reputation for “telling it like it is” and presenting an unwavering progressive agenda. District 18 residents say they most admire Johns’ tenacity to take on tough issues without fear, and they say that her disarming personality will benefit her in the rough-and-tumble Annapolis environment.

Hours after the May 18 school shooting in Santa Fe, Texas, Johns boldly proclaimed her support for repealing the 2nd Amendment, writing, “And almost 250 years later, it’s time to bring our founding documents into line with the realities of our modern age.” The social media post amassed several comments and shows of support.

If District 18 voters are looking for an undaunted progressive to carry the torch in Annapolis, Johns would be the candidate who will not play ball with the good ol’ boys while using her delegate seat to bring attention to important issues – death with dignity, marijuana legalization and criminal justice reform, just to name a few.

In the year of the woman, Johns’ record as a women’s advocate and fighting for pro-choice policies clearly sets her apart in this race.

Town of Chevy Chase Council member Joel Rubin is capitalizing on his national resume to boost his campaign, having spent close to a decade working for the State Department. Rubin has also built a television presence, appearing often on MSNBC to discuss national security and foreign policy issues.

There is no question that Rubin is one of the smartest policy wonks amid the field. He is comfortable talking policy and has the academic prowess to be a policy leader in Annapolis.

Rubin has used his campaign to highlight important issues like cyber and election security and has called on Gov. Larry Hogan, Attorney General Brian Frosh and State Election Board Chair David McManus to ensure the integrity of Maryland’s voting systems.

Moreover, Rubin has also earned the reputation as a no-nonsense, tell-it-the-way-it-us kind of candidate. Like Johns, Rubin isn’t afraid to take a shot or two at his opponents, challenging his fellow District 18 Democrats to take a stand on big issues. Voters appear to appreciate Rubin’s substantive grasp on policy and his fearless demeanor in upsetting the proverbial apple cart in Annapolis.

Objectively viewed as two of the most affable candidates in the eight-person field, their campaigns, while well-intentioned and substantive, have failed to catch fire, several political observers opine. The two candidates, to their detriment, have raised little money, which, in Montgomery County, is a major liability.

Luest, though, has been unafraid to speak publicly about her unfortunate run-in with Delegate Jeff Waldstreicher, who is running for the open state Senate seat, blasting Waldstreicher for suggesting she exit the House race and instead run for state Senate – all to boost his chances against Dana Bayer in the contested Senate primary to replace outgoing state Sen. Rich Madaleno, who is running for Maryland governor.

Luest’s “low-carb campaign,” her commitment to run a “modern, personable, sustainable, environmentally-friendly” campaign operation, has set her apart from her competitors. An outspoken victims-rights advocate, Luest has called attention to sometimes otherwise overlooked issues in a state House campaign. She promises to fight on behalf of victims and trauma survivors in Annapolis.

Probably the least known in the field, Ron Franks, nevertheless, is knocking on a lot of doors, voters in District 18 tell A Miner Detail. Franks’ career working for a nonprofit that assists inmates on Rikers Island with re-integrating back into their communities is an important distinction among the candidates, one that could be put to good use in Annapolis.

The Wheaton resident is the vice chairman of the Mid-County Advisory Board and is a member of the Wheaton Urban District Advisory Committee. He’s running on key issues that include affordable house, environmental protection, improving public schools, and transportation, to name a few.

Early voting kicked off today and extends until June 21. The primary is set for June 26.

Johns leads D-18 field with most cash on hand; endorsed by ‘Run for Something’