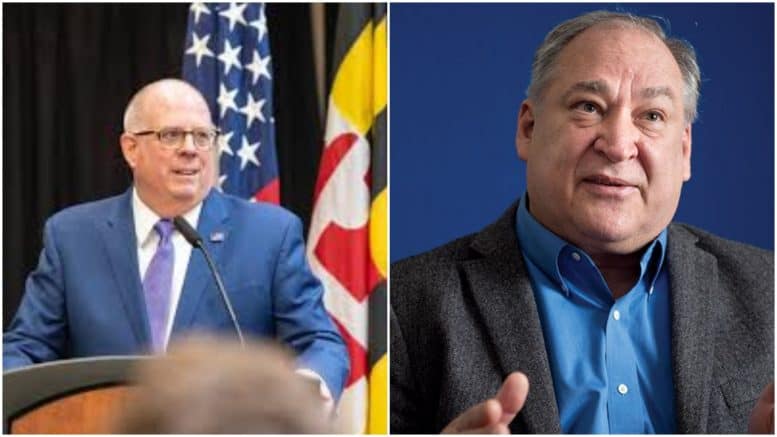 A little over an hour into Wednesday’s Board of Public Works session, Montgomery County Executive Marc Elrich (D) turned up the heat in the room when it came time for him testify.

Elrich, a progressive Takoma Park Democrat, was one only a handful or less of individuals who trekked to Annapolis Wednesday to air their grievances to the state’s three-member Public Works Board over Gov. Larry Hogan’s (R) proposal to widen Interstate 270 and the Capital Beltway, which would include adding toll lanes managed by a private company.

As Elrich approached the podium, Hogan announced to the packed room that 40 people were slated to testify, requesting speakers to “hold their remarks to one minute a piece.”

“One minute – you can’t possibly have meaningful discussion.”

“We’ve had plenty of meaningful discussions, and you can submit all the rest of your information – but we just can’t spend hours here,” Hogan shot back.

Hogan and his administration since announcing their traffic mitigation plan in September 2017 held over 70 events with elected officials and local communities, with thousands of attendees present, according to a recent press release sent to media by the governor’s staff.

“I’ll make my point as quickly as possible then,” Elrich said.

Hogan interjected, rebuking Elrich, “You and I have actually had personal discussions about it.”

“That’s not a working group,” Elrich retorted. “You’re not a transportation person.”

“We were not part of this process,” Elrich claimed. “You did a press conference and announced what you were going to do before you talked to anybody. We want solutions. Just to be…”

“The press conference the county executive before you…. it was two years ago. Ike Leggett was there and a part of it, and part of the discussions.

“They weren’t happy, and neither was our staff!” Elrich said.

That remark elicited laughter from Hogan.

“I didn’t know who you were at the time,” Hogan joked.

State Treasurer Nancy K. Kopp jumped in on the verbal do-si-do, telling Hogan that Elrich was, at the time, a member of the Montgomery County Council.

“It’s not true that they worked with us. It’s the difference between talking with people and working with people. Your plans don’t reflect our master plans. Your assumptions that we don’t support anything is nuts; because personally, I supported reversible lanes on 270; I’ve talked with Greg Slater about other solutions beside the reversible lanes that don’t involve rebuilding,” Elrich said pointedly.

Elrich, a longtime vocal opponent of Maryland Route 200 – the Intercounty Connector -said “you already built the ICC, and that it was supposed to be a bypass before 95.

“If you fix 270, which we do not oppose adding lanes to 270, and bring the traffic over on 95, you take, in your own limited study, twenty percent of the traffic that’s coming down 95 and swing it over to Virginia on 495, you can put it on without any of the drastic stuff that you think you need to do..No.,” Elrich said.

Elrich said that if they have “plans that they can deal with”, then they would be “happy to move forward.”

Finishing his remarks, Elrich, acknowledging that he exceeded his time limit, ensured the governor that he wants to work with him to relieve traffic congestion in Montgomery County.

The Board ultimately voted 2-1, with Comptroller Peter Franchot (D) joining Hogan, to advance Hogan’s plan as a public-private partnership.

ICYMI: Read A Miner Detail’s 5 takeaways from Wednesday’s Board of Public Works.

Be the first to comment on "Elrich, Hogan trade barbs over P3 proposal at Board of Public Works meeting"