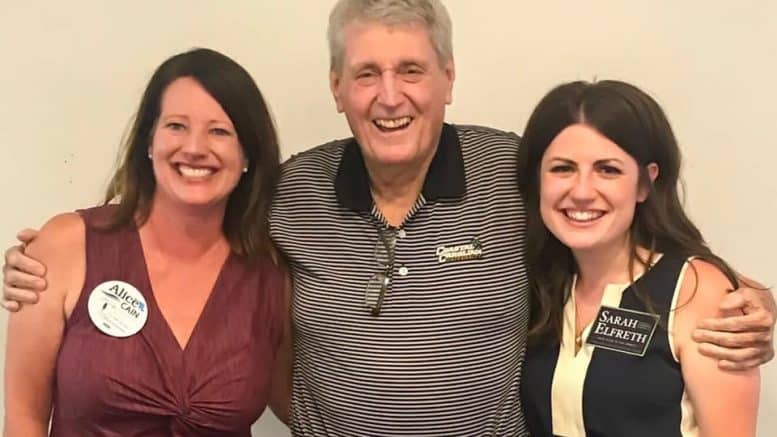 House Speaker Michael E. Busch’s sudden and unexpected death last Sunday left a life-sized hole in the hearts of the multitudes of Marylanders who knew and worked with the Baltimore native and college football star.

The 72-year-old Annapolitan died last weekend at the University of Maryland Medical Center in Baltimore, after being hospitalized the previous Monday for pneumonia and a day before the  Maryland General Assembly concluded its annual 90-day legislative session at the stroke of midnight Monday.

Busch’s untimely death leaves vacant the top post in the Maryland House of Delegates  – the speakership – as well as the Anne Arundel County-based House seat in District 30A.

The process to fill Busch’s House seat in the two-member district is now officially underway – and state Sen. Sarah Elfreth and Del. Alice Cain are both involved, meeting with applicants and offering advice as they see fit.

The Anne Arundel County Democratic Central Committee is accepting applications to fill the House seat left vacant by Busch. The committee is constitutionally charged with sending Gov. Larry Hogan a name within 30 days of opening the process. Hogan then will appoint a new delegate to fill Busch’s term.

The application process is 14 days long. Once the application deadline has expired, the 13-member elected central committee is set to meet at 6 p.m. on Thursday, April 25 at Village Commons Community Center in Gambrills, outside of District 30A, to interview applicants.

Democrat Del. Alice Cain, first elected in November 2018, serving as Busch’s seatmate in District 30A, told A Miner Detail on Saturday that there are “14 people” that she’s “aware of vying for the seat so far.”

“A number of them [applicants] have reached out to me. I am saying yes to everyone who asks to meet, and was in the office today for several such meetings,” Cain wrote.

Cain did not share the applicants’ names with A Miner Detail, writing that she’s “not sure” that she should share their names because “some of them are still on the fence, need to talk to their employer, etc.”

Sarah Elfreth, the state senator representing District 30, when reached yesterday, pointed to an op-ed that she and Del. Cain wrote together, published today in the Capital Gazette, that highlights specific political and character traits that they hope Democratic central committee will consider when selecting a Democrat to fill Busch’s seat.

An excerpt is below of Elfreth and Cain’s Capital Gazette op-ed:

First and foremost, a person of integrity who sees public service as an honorable way to serve their community.

Second, someone who understands that, as the speaker often said, “serving in the legislature is the ultimate team sport.

Third, someone who has demonstrated work ethic as a candidate themselves or a serious campaign volunteer. It is one thing to want to be appointed to an office — something else altogether to put your life on hold for a year or more and to work every single day to earn your seat.

Fourth, someone who knows how to listen and how to disagree without being disagreeable. Some of the most touching tributes to the speaker have come from people he frequently disagreed with – but he earned their respect by always treating them with respect.

Henson, 35, an attorney, was elected to the Annapolis City Council in November 2017, serving Ward 6. She defeated Democratic challenger DaJuan Gay in a September 2017 primary.

Sources who spoke to A Miner Detail on background said that Elfreth and Cain are privately pushing Henson with central committee members.

Elfreth praised Henson yesterday when asked to respond about whether she is privately pushing Henson to fill Busch’s House seat.

“I think Shaneka would make a wonderful delegate and certainly shares many of the Speaker’s values and work ethic. I haven’t been shy about telling people that when asked, but I’m also not telling the central committee how to vote,” Elfreth wrote.

Elfreth did not respond when questioned about whether she contacted a member of the House last week, requesting that the state lawmaker refrains from interfering in the selection process after said member made calls to endorse another Democrat seeking Busch’s vacant seat.

Elfreth doubled down on Henson when pressed again over an alleged call to a fellow state lawmaker to request they not interfere in their district’s selection process.

“Alice and I really like Shaneka and think she would be a great addition to the team and great asset to the community,” Elfreth wrote.

“I think Shaneka – who meets three out of three of the top qualities I’m hoping for in my seat-mate – would be great, and I told her that. I have a lot of respect for what I’ve seen from her in City Council meetings and around the community.”

Cain said that she “also told another potential candidate” that “they would be great,” while telling another candidate that she “thought they weren’t ready yet” to fill the late Speaker’s seat.

“Only one candidate sort of asked for an endorsement and I told him no (nicely) because he has not demonstrated the qualities I think it takes to be successful in this job,” Cain wrote.

Cain told A Miner Detail that her “thinking on all of this was influenced by the Speaker, who did not endorse in the primary,” but did encourage her to run for office.

“He [Busch] may have encouraged other candidates to run too. So it feels like following his tradition by encouraging people, including Shaneka, to run without actually endorsing anyone. But this is uncharted territory so I suppose I could change my mind.”

Henson did not seek state office in 2018.

Axe – a U.S. Naval Academy graduate, a retired U.S. Marine Corps officer and Harvard Kennedy School of Government graduate – placed third in the Democratic primary behind Busch and Cain with 19% of the vote, 2,773 votes, respectively. He is expected to interview for the vacant seat.

Axe taught political science courses at the Naval Academy from 2010 to 2012 and currently teaches a graduate course as an adjunct professor for Georgetown’s School of Foreign Service.

Busch’s body will be taken in procession Monday from the John F. Taylor Funeral Home in Annapolis to the State House, where he will lie in state under the State House Dome from 1 to 7:00 p.m. and from 8 to 10 a.m. Tuesday. A funeral mass will be held at St. John Neumann Catholic Church at 11 a.m. Tuesday. The interment will be private.

Busch was sworn in as the 106th speaker of the Maryland House of Delegates in January 2003 and became the state’s longest-serving speaker in state history in 2012.

Mr. Busch is survived by his wife, Cindy, and two daughters, Erin and Megan.

Be the first to comment on "Process underway to fill Busch’s House seat; Annapolis alderwoman emerges as apparent favorite to Elfreth, Cain"