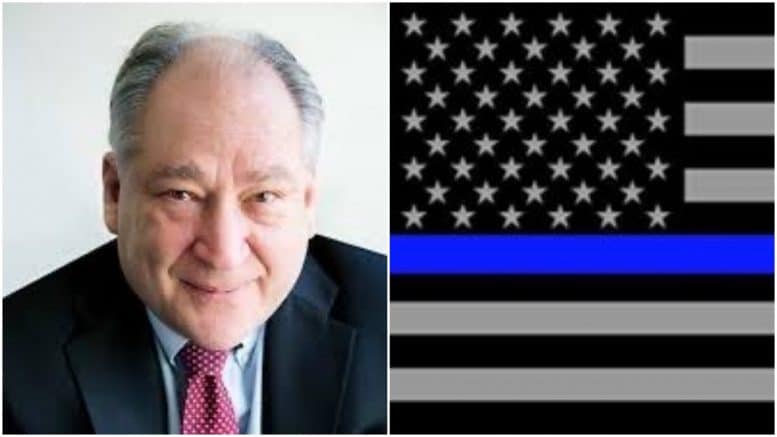 It began as a gesture of goodwill when a young boy and his father presented Montgomery County’s 5th District police officers with a handmade wooden American flag to show their appreciation to local law enforcement in recognization of National First Responders Day on October 28.

The Montgomery County Department of Police on Wednesday tweeted thanks to Shelton, writing that the gifted flag would be “displayed in the 5th District Station.”

Thank you to resident James Shelton, who presented Montgomery County 5th District officers with a wooden American Flag that he had made in recognition of National First Responders Day. The flag will be displayed in the 5th District Station. pic.twitter.com/kbAI32xHkY

By Friday, however, the “Thin Blue Line” gift turned into a controversy after Montgomery County Executive Marc B. Elrich (D) ordered the flag to be removed from the 5th District’s Police Station after receiving pushback from some Montgomery County residents who believe the flag “is a racist response to Black Lives Matter.”

Other objectors to the flag claim that it is a symbol for a lack of police accountability in America, especially after a number of unarmed African-American men and women have been shot and killed by police officers around the country, some without provocation.

By Friday evening, Elrich, of Takoma Park, heeded the dissenters’ calls to remove the flag and ordered that it be removed from the Germantown branch of the Montgomery County Police.

Elrich issued a public statement that read, in part, “The flag provides a symbol of support to some but it is a symbol of dismissiveness to others. Because it is divisive, the flag will not be posted in the 5th District nor in any public space within the Police Department.”

Hogan, who is considered an ally to Maryland law enforcement officers, called on Elrich to “immediately reverse” his “terrible decision and to apologize to the police and citizens of Montgomery County.”

A Miner Detail has reached out to Montgomery County’s public information office for comment.

The “Thin Blue Line” dates back to the 19th century when British forces held off Russian cavalry forces during the Crimean War, in 1854. The British Army’s traditional red uniforms were viewed by the world as a symbol of prestige and robust military power. In traditional linear formation, British forces lined the battlefields of war in what became known as a “Thin Red Line.” In 1854, the 93rd Highland Regiment of Foot of the British Army stood side-by-side and held strong against Russian forces.

In 1911, poet Nels Dickmann Anderson wrote a poem called “The Thin Blue Line.” The phrase was a reference to the blue uniforms worn by the men of the United States Army in the late 18th and 19th centuries.

While no clear date exists as to when American law enforcement began to use the “Thin Blue Line” phrase, the term is believed to have taken off sometime in the 1950s, eventually evolving into a symbol for law enforcement standing “between chaos and order or between criminals and the potential victims of crime.”

What the “Thin Blue Line” symbolizes for U.S. law enforcement

While no universal meaning exists, American law enforcement officers mostly agree that the “Thin Blue Line” symbolizes a sense of uniformity among police officers and their families – regardless of race, sex, gender, and religion – keeping order, deterring crime and maintaining peace in their respective communities. 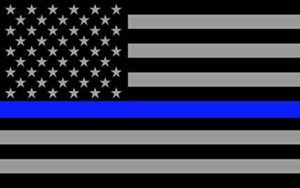 The “Thin Blue Line” flag concept took off after it was released in 2014. Supporters of law enforcement, and thousands of American law enforcement officers themselves, proudly display the flag (and other merchandise) to show their support and solidarity on behalf of the law enforcement community.

However, the flag soon became a symbol of controversy amid supporters of the Black Lives Matter movement.

The ‘Thin Blue Line” flag has now become an opposition symbol within the Black Lives Matters movement and within other movements created to highlight systematic injustices as a result of actions taken against African-Americans by law enforcement officers.

During the infamous 2017 Charlottesville, V.A. Unite the Right rally, members of a white nationalist group used the “Thin Blue Line” flag as a symbol to show support for police and opposition to the Black Lives Matter movement. After Charlottesville, more white nationalists and white supremacists began using the “Thin Blue Line” flag in support of law enforcement and police authority.

The Michigan company responsible for manufacturing the flag strongly condemned the Charlottesville white nationalists over the use of their flag design, telling USA TODAY, “We reject, in the strongest possible terms, any association of our flag with racism, hatred, and bigotry. To use it in such a way that tarnishes what it and our nation believe in. The thin blue line flag stands for the sacrifice law enforcement officers of this nation make each day. We ask our nation to hold faith with those that defend the thin blue line.”

The National Association of Police Organizations strongly condemned the use of the “Thin Blue Line” during the Charlottesville protests as a symbol of hate and racism, telling USA TODAY in August 2017, “No police department, no official police group would ever go in there and raise their flag for that type of demonstration.”

While Elrich could qualify as an expert in public safety matters affecting Montgomery County, his relationship with the police is tenuous at best, according to at least four Montgomery County law enforcement officials who spoke to A Miner Detail on Saturday on the condition of anonymity.

One Montgomery County Police officer stationed in Silver Spring shared that Elrich “has virtually no interest in developing a relationship with our police force.” The officer went on to say that “Elrich and [Montgomery County Councilman] Will Jawando (D) hate us. We [MCP] don’t want to work with Elrich when we know he doesn’t have our backs.”

“When Mr. Elrich assumed office last year, we did our best to make no assumptions about his leadership. As time passed, though, the message was clear that Mr. Elrich is disinterested in the day-to-day operations of MCP. He appears to be aloof, and he has not given LEOs much assurance that he’s supportive.”

“From start to finish, Elrich failed on a number of fronts during the police chief hiring process. Marcus Jones should have been a no-brainer, but Elrich wanted someone outside of Montgomery County – Tonya Chapman – who turned out to be a disaster. She withdrew, and he went to his second-best-choice. He sent mixed messages to our commanders throughout the hiring process and he was unprepared to undertake one of the most critical aspects of his job as county executive. We watched this mess in disbelief.”

One other Montgomery County law enforcement official shared a slightly more optimistic view of Elrich, giving him the benefit of the doubt of being a “relatively new” county executive but still expressed disappointment in his decision to disallow the “Thin Blue Line” flag in the District 5 station.

Shelton told ABC 7 on Wednesday that he wanted his son “to be involved so he could see how important it is to give back as well as to help build good character and make a wonderful memory we will always have.” [My son] was so excited to help and even more so when be helped me deliver them.”

A Miner Detail reached out to Shelton for comment on the latest statement from the governor and the evolving controversy.

What Happened Today in Montgomery County was Shameful