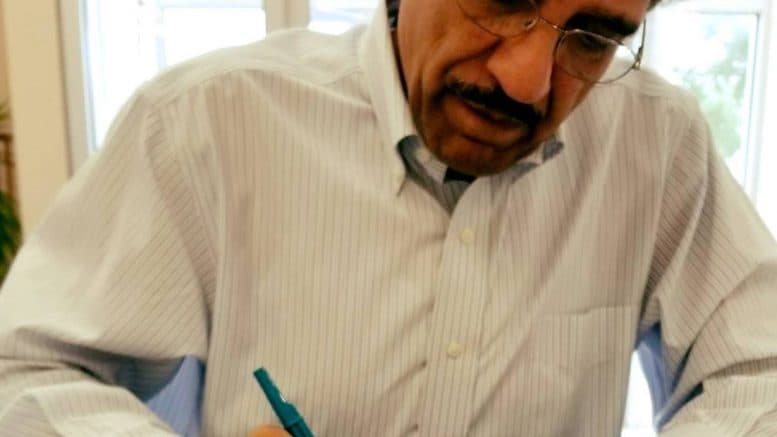 Montgomery County Council at-large candidate Mohammad Siddique will kick off his campaign on Sunday, September 24 at 2:30 p.m. in Gaithersburg.

I plan to write an in-depth profile of each Montgomery County Council candidate well before the June 2018 primary, but, just for a moment, I want to offer a brief vignette about my first meeting with Mr. Siddique.

This preamble is becoming a bit exhausting, I know, but stay with me for a moment.

As I’ve written in previous updates, I’m somewhat new to the Montgomery County political scene. I’m especially green around the edges in Democratic politics. After all, I’m a recovering Republican-turned-Unaffiliated (The Republican Party and most of its supporters – save a few – left me long ago after selling crazy for years) and I’m taking the time to learn as much as I can about Montgomery County’s political factions, alliances, etc. That takes a lot of time, as you can imagine. But I’m doing my due diligence as a reporter, blogger, journalist.

Every Montgomery County Council candidate I’ve met thus far has completely impressed me in different ways. I mean that sincerely. The candidates I’ve met have given me a number of tangible reasons to support their campaigns (although because Maryland doesn’t have open primaries – but it should – I cannot vote for any of the candidates in the upcoming June primary because, as stated above, I’m a registered Unaffiliated).

Before last Friday, September 8, I had never met Mohammad Siddique. I wasn’t aware of his background, and I didn’t know anything about his upbringing, professional career, hobbies, family, etc. I met Mohammad on a warm Friday morning over scrambled eggs and coffee at the Gaithersburg First Watch in Muddy Branch Square.

By trade, I learned that Mohammad is an engineer. He has over forty combined years of professional and management experience in the private sector and in government.

If anyone knows the ins and outs of Montgomery County’s complex budget, it’s Mohammad Siddique. He provided nuanced and detailed responses to my various questions about Montgomery County’s budget. I wanted to know and understand his thoughts on the goods and services Montgomery County provides. Of course, most of us aren’t happy with our property taxes rising, but Siddique answered my questions – one after the next.

If you’re a Montgomery County citizen looking for a fiscal watchdog, Siddique is your candidate.

Siddique understands how to squeeze every dollar and save one, too. Quite frankly, taxpayers in Montgomery County are looking for a candidate who has a keen business sense and a fundamental understanding of the private sector. Siddique’s breadth of knowledge of the private and public sector is unparalleled.

Make no mistake – Siddique is a progressive Democrat. But his baseline appeal does, however, stretch well beyond any partisan labels. Siddique and I both share a passion for immigrant rights, civil liberties, community policing and smart growth. We both believe in fact-based analysis and making financial decisions based on the data that we have at our disposal.

Siddique most impressed me when he referred to himself as a “technocrat.” I’m a big believer and supporter of technocracy driving local government. If you share similar sentiments, Siddique is your candidate.

Nobody cares which candidates A Miner Detail supports, endorses, etc. So, I’m not doing that on this platform. And I won’t use A Miner Detail to launch bombs or rank candidates into first, second or third tiers. That’s unfair to the candidates running; nobody can honestly predict how this race is going to turn out.

Every candidate running has something unique to offer Montgomery County residents. A Miner Detail (me, Ryan Miner) will make sure every candidate has a platform to make his or her pitch.