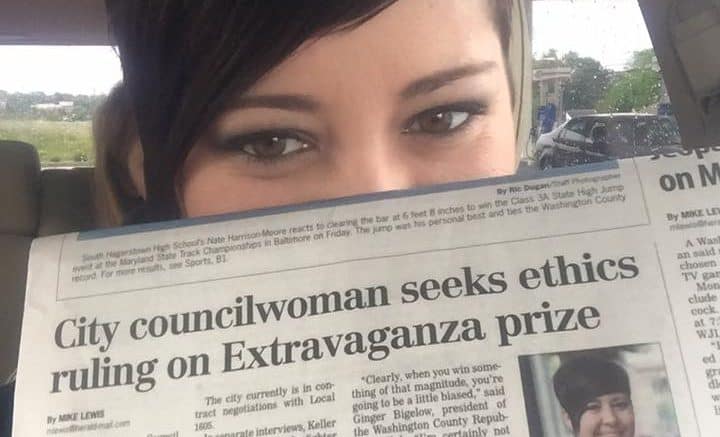 The Republican Party in Washington County is riding high: Trump’s Electorial College win; an all-white male Republican state delegation and commissioner board; a Board of Education dominated by rightwing Republicans; a powerful Republican Central Committee, and a noisy Tea Party.

Jerry DeWolf, the Washington County Republican Central Committee Chairman, and Virginia Lynn “Ginger” Bigelow, the president of the Republican Club, show no moral compunction when it comes to attacking a registered Democrat, even when said attack is baseless, unfounded and fundamentally moronic.

When Emily Keller won her first Hagerstown City Council race on November 8, 2016, with 7,634 votes – more votes than any other city council candidate in the election – the Washington County Republicans went to work quickly to attack Keller’s popularity in the community.

DeWolf and Bigelow couldn’t possibly challenge Keller by engaging her in an intellectual policy debate because, quite frankly, they don’t have the aptitude to compete. Instead, however, the two Republicans dip into the gutter and try to challenge Keller’s character in a sad attempt to weaken her popularity in a community that has almost fully embraced her fresh approach to politics.

So I’ll break down the facts. First I suggest you visit Keller’s public Council Facebook page (below):

Here’s a quick run-down of the facts:

I received a call from a Hagerstown employee on Thursday evening, who told me that DeWolf and Bigelow were targeting Keller by publicly insinuating that her Bonanza cash prize winnings would lessen her resolve to remain neutral when the City of Hagerstown negotiates with Local 1605, the Hagerstown fire union in charge of executing the annual Bonanza Extravaganza.

Multiple sources have brought to my attention your joint effort to call into question Hagerstown City Councilwoman Emily Keller’s character and personal ethics after she fairly won a prize at the 2017 Bonanza Extravaganza. According to Councilwoman Keller, she purchased her ticket to the Bonanza with personal funds. Her number was drawn without incident and she subsequently was awarded a cash prize. She followed up with both the mayor of Hagerstown and the City’s ethics committee, requesting an advisory ruling to ensure her winnings were beyond reproach.

Considering that Ms. Keller is vastly popular in the community, are you both attempting to impugn her character and call into question her personal ethics in an underground effort to weaken her credibility – all under the guise of a partisan attack?

You both serve in an elected position in Washington County as Republican Party officials. Are attacks on Ms. Keller rooted in her status as a registered Democrat?  Secondly, have you both applied an across-the-board ethical litmus test to all elected officials in Washington County? Did you both challenge the personal ethics of Washington County Board of Education member Mike Guessford, a registered Republican, when an ethics advisory panel ruled that his business profited from the school system while he was a sitting board member? Have you called on Mike Guessford to pay back the money he owes, or, in the very least, challenged Guessford on why he has failed to present to the school board a payment plan, as indicated by the ethics ruling against him?

You admitted to creating a Facebook page last year – Liberate the Washington County Board of Education – in which you leveled an aggressive attack against Emily Keller. (I have the screen sheets for the record.) Is this attack on Ms. Keller leveled on behalf of the Republican Central Committee, or individually – by both you and Mrs. Bigelow?

Is it fair to question your own ethics, considering the following incidents that are listed (click the links below) on the Maryland Judiciary Case Search’s website under Virginia Lynn Bigelow?

5) In 1995, you pled [guilty] to criminally writing bad checks under $300.00, and you were represented by D. Bruce Poole, a former [Democratic] state delegate in Washington County and the former interim chair of the Maryland Democratic Party. http://casesearch.courts.state.md.us/casesearch/inquiryDetail.jis?caseId=5V00003337&loc=39&detailLoc=DSCR

How do you respond to multiple sources who have reported to me the various financial troubles you’ve had over the years (housing-related issues, to be more specific)? Multiple sources have reported to me that your personal financial situation is rumored to be nothing short of precarious. How would you reconcile your position on the Republican Central Committee, promulgating fiscally conservative Republican principles, when your own fiscal house has been called into question by multiple community members?

My deadline for comment is tomorrow by 5:00 p.m. I will be releasing an article soon thereafter. I will await your comments.

I appreciate any response you care to offer.

Bigelow quickly responded to my email, blasting me for personally attacking her, writing,

I am appalled at your vicious attacks! I am not by any means nor have I ever tried to impune any one’s character much less Emily Keller. The optics of accepting anything I understand she won fair and square looks bad when the Union is in negotiations with the City. It would I am sure make her feel a little bias. I don’t feel the need to explain my personal finances but the foreclosure situation was revolving around the same house which was 200,000 under water and the bank would not modify. The Company i was working for closed and my income was cut drastically. The check was absolutely an accident and paid for immediately after notice but the situation could not be dropped once started. If anyone impunes people’s character it is you. Ryan I have known you for a long time I don’t understand your need to be involved in Washington County when you don’t live here and are not a tax payer here. Ginger

To his credit, DeWolf responded the next morning at 4:08 a.m., writing,

I hope this finds you well.

Recently myself and others in the Washington County Republican Club were made aware of Ms. Keller’s Bonanza winnings. At first glance the optics of it seemed awkward by the merits that she is a sitting City Councilwoman, the event was sponsored by local 1605, and it is my understanding that the city of Hagerstown is still under negotiations with local 1605.

When I made a cursory inquiry into how a city ethics panel works, or for more information, I was informed by the City Administrator Ms. Means, that Councilwoman Keller has already asked for an ethics panel review.

I was very pleased to hear this and feel that Ms. Keller has made the right choice, and I applaud her decision. I, and as far as I know, no other member of the republican club, had made any accusations, regarding this issue, other than the optics of it looked bad.

Ms. Keller has proven in her five months to be a hard worker for the citizens of Hagerstown as she promised to be, and is doing very decent and noble work on the unfortunate opioid crisis within the city.  While we have witnessed far too often in governments small and large around the country, ethics violations that resulted in violations of public trust of officials, we certainly did not want any appearance of wrongdoing here, even if there wasn’t.  An ethics review panel is the right course of action, and I for one, am confident that this issue can be put to rest after a quick review.

I do not under any circumstances consider this an attack on Ms. Keller’s character, but merely trying to lend a careful eye to our elected local, state and federal officials. Again as I’ve stated before, I applaud Ms. Keller’s decision to seek an ethics panel review to make sure it was above reproach and am confident this is not an issue. Furthermore I thank Ms. Keller for serving her fellow citizens on the Hagerstown City Council.

Thank you very much sir for asking for comment.

“When is it ever OK for an elected public official to win, or accepts gifts from a local union that is under negotiations with the same body as the elected official? Answer: never. This calls for an Ethics Panel Review of Hagerstown City Councilwoman Emily Keller, and calls into question her judgement,” the email reads.

Did DeWolf or Bigelow think to contact Emily Keller before firing off several emails to local media and city officials questioning the optics of Keller accepting a prize? Had the two Republican office holders contacted Keller initially, before launching a media blitz against her, perhaps they would have learned that Keller herself sought an ethics panel ruling with the City. Of course, they didn’t have the gumption just to ask Keller a basic question. No – they tried to embarrass her. But it didn’t work out as expected.

And what about the abject hypocrisy at play?

Did DeWolf or Bigelow ever publicly challenge the “optics” of Washington County Board of Education member Mike Guessford for profiting from the school system as a sitting school board member?

Not once. Why is that? Because Michael Guessford is a registered Republican. And Emily Keller is a popular Democrat serving in a nonpartisan Hagerstown City Council seat.

When did the Republicans of Washington County pen a joint letter to the editor calling on Karen Harshman to resign her Board of Education seat to save the taxpayers from her ongoing legal fees? Not once. Harshman’s misconduct in office would have been an easy target for DeWolf and Bigelow; after all, Harshman is a registered Democrat. Did you see any umbrage raised by the Republicans with respect to Karen Harshman’s six-month-long public saga? Not once.

Let’s apply intellectual honesty across-the-board. If Washington County Republicans are concerned about local unions offering “gifts” to members of the Hagerstown City Council, then would it be fair to extend their concerns to the teachers’ association donating money to school board candidates? The school board will eventually negotiate with the teachers’ association on behalf of Washington County teachers. DeWolf and Bigelow… do they understand this? Probably not.

Just because DeWolf and Bigelow’s Republican apparatus dominates the political landscape in Washington County doesn’t give them free reign to liberally impugn the character of any Democrat they consider a viable threat to their said Republican dominance.

DeWolf and Bigelow’s attack is a non-starter. Had they bothered to reference the ethics policy from the outset, they would understand that Keller’s – prize – winnings do no rise to the level of bad optics – no matter how they try to spin it.

Jerry DeWolf and Ginger Bigelow cannot comprehend an intensely intelligent, fiercely independent and decidedly motivated registered Democrat that is Emily Keller. To top it off, Keller, of course, is a woman. And the Republicans just cannot seem to handle that.

Stay above the silly shit. Remember why you were elected. Ignore the haters and continue to do the right thing. Conduct yourself with integrity. Live your values. Be the voice of moderation. Weigh the facts of every decision, and always conduct yourself with grace and humility. You won your seat because you worked harder than everybody else and you wanted it more than anybody else. You are making a difference in your community each and every day. Fight the fights that need fighting. Your talent is boundless.

You got this. Don’t worry about DeWolf and Bigelow.

You both are going to have to do a lot better than this to bring down Emily Keller. If you want a character debate, Emily Keller is way out of your league.