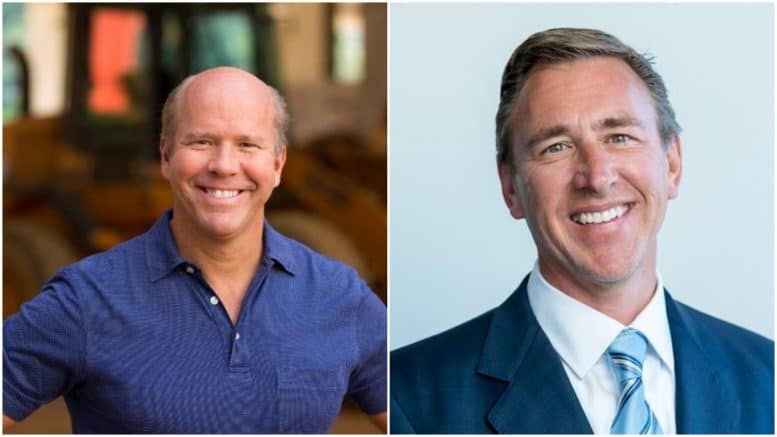 I appreciate the shout out in WaPo. Yes, @DavidTBlair would be a superb Montgomery County Executive and help make MoCo more competitive for jobs. https://t.co/2TnJRAjLab

Delaney and Blair have, at least on the surface, plenty in common: Both men are former CEOs of publicly-traded companies; both entered politics having not risen up the political ranks, taking on establishment figures and career politicians; and both men reside in Potomac.

A center-left Democrat, Delaney, 55, was re-elected in 2014 and 2016. Last July, Delaney announced he would give up his safe seat in the House of Representatives and instead run for president in the 2020 Democratic primary, becoming the first official entrant into the presidential contest that is expected to become a crowded cage match of several high-profile Democrats.

Blair, 48, is hoping to follow in Delaney’s election success – but not without a fight.

Almost immediately after The Washington Post first endorsed Blair last month, he’s been on blast by several of his Democratic opponents and their most fervent supporters.

Supporters of Marc Elrich’s county executive bid have been most hostile, among the executive candidates running, in their opposition to Blair. Armed mostly with their social media accounts, a majority of Blair’s political assailants – some of whom even live outside of Montgomery County – condemn the wealthy former business executive for dipping into his own pocket to self-fund much of his race, mirroring similar criticism Delaney received in his three congressional races.

Blair’s opponents are less likely to bemoan his business-friendly smart-growth, buy-local campaign; instead, several Facebook carpers are seemingly more eager to promulgate unsubstantiated accusations of business impropriety, tangentially linking Blair to a class action lawsuit while accusing him of trying to hornswoggle Democratic primary voters into believing that he is one of them. (Blair was once a registered Republican and switched his party registration to Democrat in his early 30’s.)

The leftwing group Progressive Maryland has endorsed Marc Elrich and is organizing campaign efforts on Elrich’s behalf – independent, they say, of Elrich’s campaign. The liberal group is targeting Blair’s business record in a lead-up to the June 26 primary. The group says it plans to raise money through a super PAC to highlight their opposition to Blair’s business record. So far, Progressive Maryland’s super PAC reported receiving a $50,000 contribution from Caitlin Heising, the granddaughter to a billionaire retired hedge fund manager.

Blair’s detractors are quick to point to a lawsuit filed in 2013 against HealthExtras that alleges widespread insurance fraud. HealthExtras is a subsidiary company of Catalyst Health Solutions.

Blair was the chief executive officer of Catalyst from the operational formation of the company in 1999 until it was sold in 2012 for $4.8 billion. After Catalyst went public in 1999, with $5.3 million in revenue, the company eclipsed $100 million by 2001. By 2004, Catalyst reached $521 million in revenue and by 2006, the company’s revenue more than doubled to $1.3 billion. By 2012, Catalyst was listed as a Fortune 500 Company with run-rate revenue of over $6 billion. It was during this period Catalyst created thousands of jobs, including many in Montgomery County.

HealthExtras represented less than 1% of Catalyst’s total aggregate revenues. The company offered a select group of unique benefits that provided extra protections to individuals. The impetus behind HealthExtras’ formation was centered on the late actor Christopher Reeve, who was known for his television portrayal of Superman.

Reeve suffered a dramatic injury in 1995 as a result of a horse-riding accident, leaving him permanently paralyzed. He believed he had excellent health coverage through his actor’s union but discovered that there was a lifetime limit that he exceeded after a few years of care. Consequently, the late actor was left without any health insurance – even though his medical expenses continued.

Reeve later became the spokesperson for HealthExtras, rooted in his belief that the company’s products were life-altering. HealthExtras provided excess coverage to its patients – additional coverage in excess of the limits of a standard health or disability plan. In addition, there were approximately half a dozen other benefits – including air ambulance services, disability coverage, and organ transplant benefits – that were incorporated in the HealthExtras products. All services were provided by third parties.

A small group of class action attorneys sought out individuals who had purchased HealthExtras coverage and suggested to them that they had somehow been defrauded in the disability portion of their coverage, and then filed a lawsuit against approximately a dozen defendants, one of which was HealthExtras. The other defendants were the various insurance companies, agents and related parties that provided benefits to those who bought the HealthExtras product.

In 2012, Catalyst was sold to a publicly traded company, SXC, which was later sold to United Healthcare, one of the largest insurance companies in the country.

Hoeber hits back against Delaney – finally

Be the first to comment on "John Delaney: ‘Blair would be a superb Montgomery County executive’"